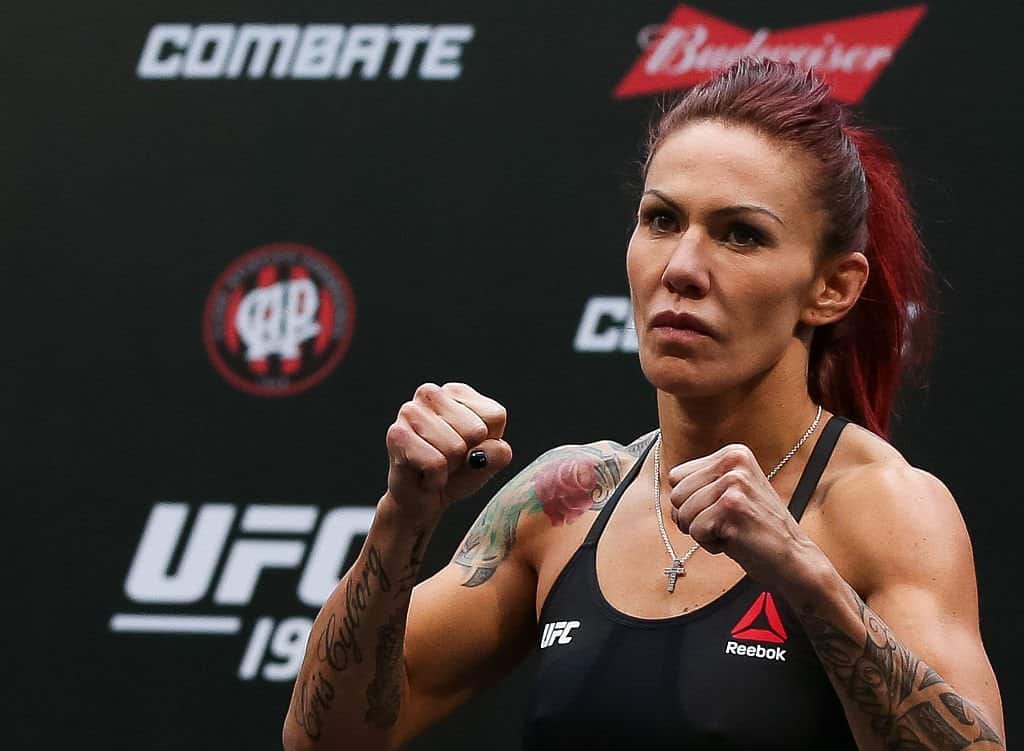 The UFC women’s featherweight champion issued a submittal plea in Las Vegas Municipal Court following an incident involving fellow fighter Angela Magaña last year. The judge – who was expected to hand down a sterner punishment – reportedly released his bowels when ‘stared out’ by Cyborg, hiding behind his hands and screaming “please don’t hit me”.

The UFC champ took to her website, CrisCyborg.com, to say that the Brazilian also took an anger management course. According to an article printed elsewhere and then immediately deleted, Cyborg was reportedly “happy that the judge realized that throwing the case out was the right thing for his balls, face, and teeth”.

“The entire experience was a learning opportunity,” Cyborg told her website. “After the completion of my Anger Management class, I feel I have gained additional tools which will help me make better decisions on how to handle the negative effects of online bullying and harassment within the work place. I am glad to move forward from the experience and have already started to create a national anti bullying program which I hope will help others dealing with similar examples of online bullying to find positive outcomes while empowering them with the self confidence it requires to move past the experience.”

Cyborg was cited for battery by the Las Vegas Metropolitan Police Department in May 2017 when it was claimed that she struck Magaña with a punch at the UFC Athlete Retreat. The incident was in retaliation Magaña ‘bullying’ her, according to Cyborg, on social media. Cyborg had also cited an offensive meme which was created using a photo of Cyborg visiting children fighting cancer at a hospital.

Magaña, widely regarded as a tasteless douche, used the situation to attempt to get some attention, given she is one of the worst fighters on the UFC roster and her nude photos were not well received. For Cyborg, the verdict represents a victory of sorts.

Legal expert John E Olso spoke to MMAFullContact about the case and why Cyborg will probably emerge from the situation a better person.

“Is she around,” Olso said in reference to Cyborg. “I mean, if she’s around I don’t want to say anything that could get me into any trouble with her. This face right her (points to face) – not compatible with punches. Can you prove she isn’t around? I mean, like, open that closet over there.”

It appeared that Olso was a little tentative to discuss Cyborg for the fear of saying something which may lead to the Brazilian ‘losing her cool’. We eventually convinced the legal expert that it was OK to talk.

“OK, good. Well, Cyborg should never have struck that other fighter girl in public. She should have kicked her ass in a lane or maybe somewhere without cameras …like a bathroom or something,” Olso said. “She was morally in the right though, cos Magaña is a tastless douche and thought she could get away with talking sh*t about a fighter that could beat her to a pulp and then use her as a tampon.

“The judge also did the right thing in throwing the case out of court. Imagine Cybrog running towards you, man. F**k that. I’d rather kick a gorilla in the balls and slap its mate’s ass then start sh*t with Cyborg. That’s my professional experience, so there you go,” Olso concluded.

Fans also appear to have reeived news of Cyborg’s case being dismissed very well. Outside the court, a fan who identified herself as “Trish Cyburger” (who looked a lot like Cyborg) said that it was a “victory for all victims of bullying”:

“It’s a victory, a victory for all victims of bullying,” she said. “When I hit …I mean, when Cris hit Angela Magaña it was nothing, just a little warning shot. I could have, I mean Cris could have, beat her into a black and white movie inside a few minutes, so that bitch should be happy she got off so lightly.