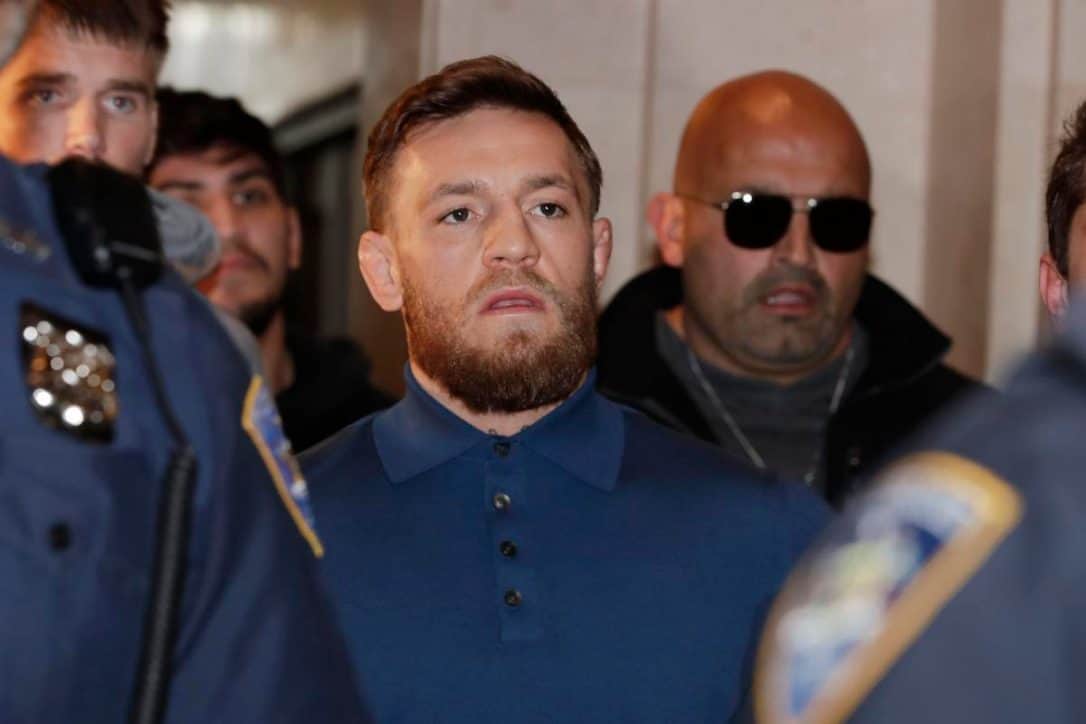 When Conor McGregor responded to claims that he was racist by declaring that he was “half-black from the belly button down,” the Irishman could never have imagined that it would lead to this. While waiting in line in Starbucks in a yet unknown location, McGregor was apprehended by police, despite doing nothing wrong

McGregor made the comments in the lead up to his money-spinning boxing debut against Floyd Mayweather Jr. in 2017. While addressing claims that he held racist views, McGregor responded by assuring the crowd in Brooklyn that he was ‘half-black’.

“We saw him just standing there, waiting for his order. I believe he ordered a double chocolate chip whipped Al Pacino or something,” said Tony, who witnessed the incident first hand.

“He was looking on his phone, waiting for the guy to call his name. Then, out of nowhere, the police came into the store and said they were placing the bottom half of McGregor under arrest. It was insane, as he had done nothing wrong, from what we could see”.

The upper-half of the former UFC lightweight champion was allegedly treated very kindly and posed with police officers after the incident. His bottom half was, however, treated completely differently by the same three men.

According to the Fulwichhampton Police Department in a statement released sometime, there was a misunderstanding regarding McGregor and his intentions in the store:

“We received a call around 3:30pm at a Starbucks store in Fulwichhampton East from concerned members of the public. According to first-responding officers, there was a gentleman behaving strangely in the store, and he was apprehended for the safety of himself and the general public. Officers confirmed that this man, UFC star Conor McGregor, was semi-compliant with them.

“While his top half was identified as posing no danger to the public, his bottom half clearly posed a grave danger. As such, officers cuffed his ankles and dragged his bottom half outside of the premises, where they inflicted reasonable offense to calm him down. The top half of McGregor was allowed to remain inside the store until officers could ascertain that the situation was under control,” said Chief Ray Cist.

This latest incident is set to bring even more bad publicity to the coffee-chain, following accusations of racial bias recently. Two innocent black businessmen were arrested for no apparent reason at one of the coffee giant’s stores, which has led to a major backlash from decent human beings who find institutional racism disgusting and abhorrent.

McGregor’s arrest has brought great embarrassment to both the company and the local police force. “The Notorious” – who is known for his outspoken and brash persona – is not literally “black from the belly button down”. This comment was intended as a light-hearted claim based on the notion that black men are well-endowed.

“Had we known that McGregor was actually white-all-over, so to speak, there would have been no alarm sounded” Chief Ray Cist added. “I mean, it makes no sense, really, does it? Conor McGregor is a white Irish man; what danger would a white Irishman pose to the general public, especially given the fact that he is rich?

“McGregor had also claimed that the Irish were the ‘blacks of Europe,’ so we thought that we just had to intervene based on this information. We now know that this is not the case, either, and can confirm that Mr. McGregor is indeed as white as a snowman’s ass.”

McGregor cannot be reached for comment but reportedly had to be hospitalized with an acute case of laughing his ass off for 12 hours straight.

Were you a witness to what happened? Please let us know what you saw in the comments section at the bottom of this page…