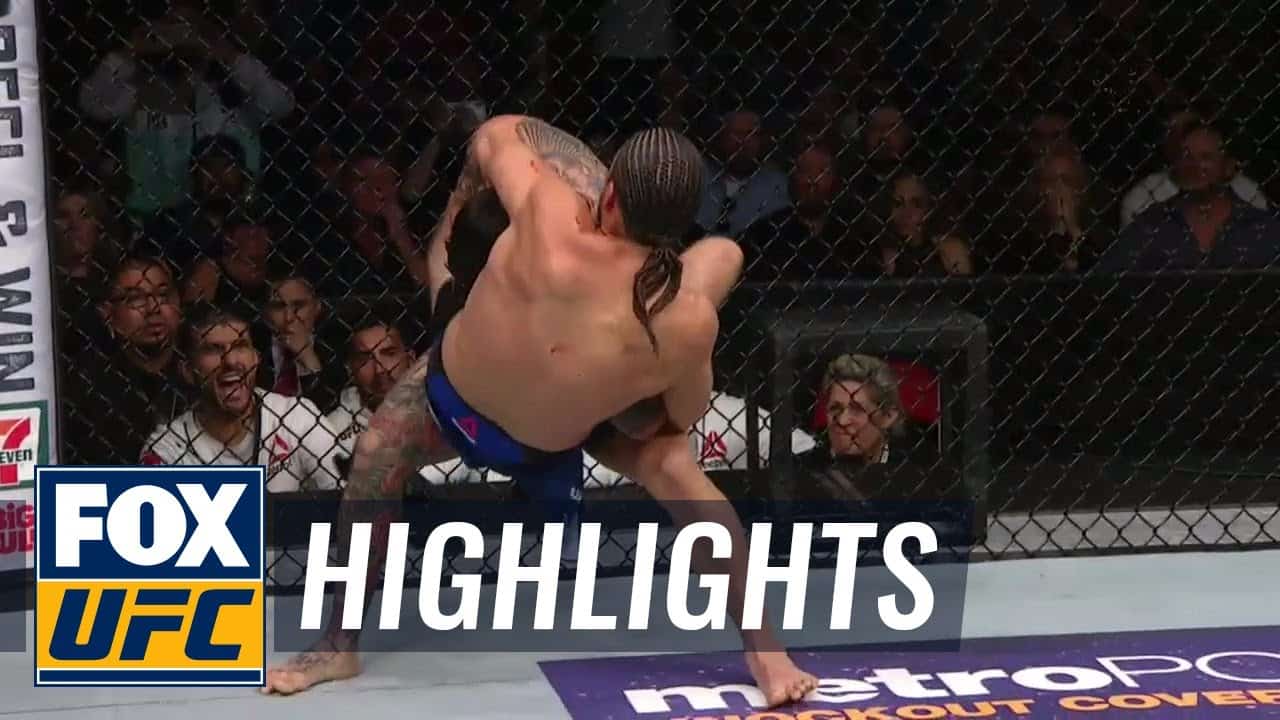 Ortega’s impressive standing-guillotine finish of Swanson, a man unlucky to have not landed a title shot against Holloway at UFC 218, was the highlight of the night in California.

Swanson tapped out to signify the end of a four-fight win streak which had brought him agonizingly close to a shot at the reigning champion. It was initially between Frankie Edgar and Swanson for a shot at UFC gold. Edgar got the nod, before being forced to pull out of the fight with a facial injury sustained in training. Swanson felt as though he would have been asked to stand in as the replacement for the former 155-pound champion, until he learned that Jose Aldo was selected in his place.

Last night at UFC Fight Night 123, Swanson was given the task of proving to the UFC top brass that he was not going away. Unfortunately for the Californian, Ortega had other ideas.

“I felt like I was going to die,” Swanson told those assembled at the post-fight press conference.

Swanson also claimed that he was “100 percent” winning the fight prior to being caught by Ortega. The 34-year-old did look comfortable on his feet and stated his intention to attempt to slow his opponent down by paying particular attention to Ortega’s midriff with some cutting kicks and shots.

“It was awesome as far as feeling my flow out there and being a little more calm and picking my shots,” Swanson said. “I felt like I was picking him apart.”

Ortega almost ended the fight towards the end of the first round, locking in on Swanson’s neck who just about managed to maneuver himself out of being choked before the round ended.

“We know once I started touching him up he was going to get desperate and start to go for stuff, and he’s big and long and it was tricky,” Swanson said.

For Swanson, his efforts culminated in a loss and one which will be painfully hard to take. This bout was the last on his deal with the UFC and if things could have gone another way, there is a chance that he could have had a title shot which may have possibly won him a title.

“That was one of my best performances,” Swanson said, “until getting caught.”

“It was tight right away. He had like a lock, you know? And then I was fighting him and kind of shaking him, and he only had like one hand. I grabbed his arm and his wrist and I felt OK. And then he grabbed his hand and I felt like I could still pull out, and then he readjusted. I felt his legs get a little higher on my body. And then it crushed my head, and then its like, I just flared up. I panicked.”

Ortega, on the other hand, has seen his fortunes change. Having taken his biggest scalp to date in the promotion, his eyes will now start to focus on Max Holloway and the UFC featherweight title. “T-City” told MMAJunkie that a light-hearted exchange in an elevator the night before the bout stuck in his head and may have contributed to his performance:

“You don’t realize because I’m getting beat up all the time,” Ortega said. “My whole life, I thought I sucked. And then I get in here and I grapple other people, and I’m like, ‘I’m actually good.’ So it feels good. I’ve been getting choked out by these guys for so long, I’m just used to another caliber of jiu-jitsu.”

The man of the hour also revealed that he would be looking to use the spotlight currently aimed in his direction for good:

“I’ve been saying, I really want to help people out,” Ortega said. “I want to use this light – to not just have it on me. They invested a lot of money to promote me and everything. And now that my name is getting out there, I want to help people out. That’s my main thing. I love kids. I love helping kids out. I’m not the perfect person, but I have the perfect heart, I feel, when it comes to helping people.

“There’s too much negativity going on in the world, and I don’t just want to talk about, ‘Hey, let’s make the world a better place.’ I want to be the change that you want to see in the world. I’ve been there; I’ve done it. I’ve been doing charity work since I was 20 years old, and now that I’m on a huge platform, maybe I can use this opportunity to help as many people as I can.”

Check out the highlights of Ortega’s win over Swanson above.