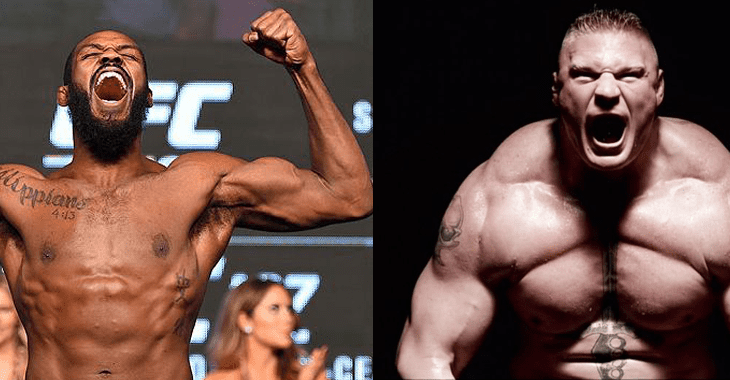 Remember talk of that fight between WWE superstar and former UFC light heavyweight champion Jon Jones…the one which would have never happened?

According to Brendan Schaub and Lesnar’s friend Mike Goldberg, it was gonna happen. Damn!

Jones’ latest scandal involving a failed test conducted by USADA will likely see him suspended for a long time. At the conclusion of his light heavyweight title-winning bout against Daniel Cormier at UFC 214, Jones had called out WWE superstar Lesnar for a money-spinning bout inside the octagon.

According to Brendan Schaub and Lesnar’s friend Mike Goldberg, Lesnar was planning a return to the UFC:

“If [Brock Lesnar] wants to return, I think he does, I think he does. I think it may be in his plans. Although, yeah, a month ago [it was more likely]. [Jon Jones’ testing positive threw a wrench into it]. Yeah, a huge wrench into it, because if it ain’t Jon, there’s nobody big enough. Nobody, there’s nobody there for him to fight. Conor [McGregor], that’s it, and I only say Conor because he opened his mouth about all the WWE guys.” Goldberg said on The Fighter and The Kid Podcast.

According to Schaub, Goldberg insisted that Lesnar’s return was only a matter of time:

Bellator 183 kicks off this weekend, with a salivating stand-up showdown between Paul Daley and Lorenz Larkin set to light up the cage. Larkin, like Daley, is a former UFC welterweight. Unlike the Englishman, however, Larkin was part of the WME-IMG era.

The 31-year-old has a chance to take his first win under the promotion’s banner when he faces off against England’s Paul Daley at Bellator 183 this weekend, however. Despite preparing for just his second bout with the UFC’s biggest rival, Larkin is already noticing big changes (via MMAFighting):

“Shoot, in my last fight, I probably got promoted more in that fight than in my whole UFC career,” Larkin told MMA Fighting ahead of this weekend’s Bellator 183 event, where he faces British powerhouse, Paul Daley. “It’s just one of those things where we’re taking advantage of it, and I’m just like, I’m here to work. Put me to work. You want me to do media? I’m down for it, but I just never got the chance in UFC.”

Another contributing factor to how Larkin sees the Bellator model trumping that of the UFC’s is the relationship he enjoys with Scott Coker, the Californian-based promotion’s President. Freedom, however, is at the core of his happiness right now:

“The big difference for me is that I’m able to hit up Scott,” Larkin said. “And don’t get me wrong, there’s probably people in the UFC who are able to hit up Dana, and just hit him up on any type of call and really talk about stuff, like about what they need. But with Scott, I can just give him a call on the phone and there will be an answer. Or if not that, it’ll be a callback in like 20 minutes and I can talk to him about anything, about the fight, it’s not even an issue.

“There’s probably a handful of guys in the UFC that can do that, but with me, that wasn’t the situation. But it is what it is, and [I was] in a position where I couldn’t do all of that and I couldn’t talk business with my boss.

“It’s just, it’s freedom,” Larkin added. “Everything is freedom. Me being able to pick out what I want to wear — it’s originality. I don’t have to just conform to what people want me to wear, to do. It’s just freedom of expression.

“One thing for fighters, especially people that are in this industry, we’re in there for 15 minutes and you want to be as comfortable as you can, and this is a big way of feeling comfortable. We get to pick out what we’re going to wear, we get to choose what’s on our shorts, our walkout. It’s a great feeling.”

Daley, on the other hand, admits that he knew little of Larkin before their match was booked:

“I never even recognized this guy until he got to the UFC and until I started looking back at his fights in preparation for this fight and I was like, ‘Oh sh*t, he was in Strikeforce while I was there,’” Daley told MMA Fighting. “He didn’t really figure into my thoughts.

“I don’t really see him as an enemy, like any guy that I’ve ever stepped in the cage with. I’m just ready to fight September 23, I just hope he stands. I know he’s a standup guy from what I can see and I know the fans are desperate for me to fight a guy that is just going to stand there. We don’t mind if we’re bashed around a little bit, but just stay on your feet and let the fans get what they look forward to when ‘Semtex’ is fighting, which is a knockout. I believe I am the most prolific and the best knockout artist in all of mixed martial arts in any weight class.”

As for Woodley, Daley is seemingly a fan of his work. Having lost against the incumbent 170-pound king in a Strikeforce bout in 2011, Daley admits that the opportunity to fight him again would be intriguing. As Woodley is currently one of the UFC’s biggest stars and Daley is, of course, contracted to Bellator, it is hard to see this one having much hope of coming to fruition, however:

“You know what,” said Daley, “He’s the champion now and he’s doing work, and I give him props because not a lot of fighters are at the level that he’s at. Give him credit. Tyron Woodley, I’d love to have a rematch with him. I think we had a good fight.

“All props to him, in every interview that he mentions the guys he’s fought, he always mentions my name and not a lot of fighters do that. I know I gave him a good fight, I know he respects my abilities, and he’s one of the top tier fighters so I would love to rematch Tyron Woodley.”