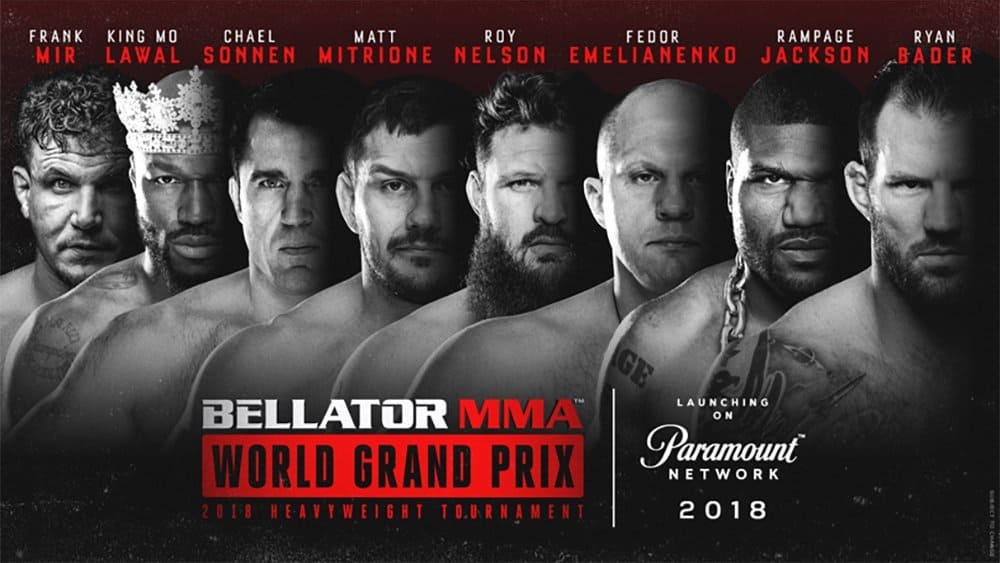 Despite only learning that he was set to feature in the tournament when the official poster came out, Chael Sonnen is preparing for glory

Sonnen doesn’t even recall agreeing to fight in the tournament but is happy to be a part, nonetheless:

“I don’t know if I was ever offered a spot in this tournament,” Sonnen told Ariel Helwani.

“I can’t remember if (Scott) Coker or (Mike) Kogan ever called and said, ‘Do you want in the heavyweight tournament?’ I think that might have happened, but I might have found out about it when the poster came out.

“I never knew there was for a heavyweight championship – I don’t think it was explained to anybody. I don’t talk to a whole bunch of the guys, but I don’t know if anybody knew this was for the championship and this is how they were going to settle it.

“They have been saying for a long time, ‘Why doesn’t the heavyweight division have a belt?’ Coker has been saying, ‘we’re getting to it’. I don’t know if anyone knew that was going to be the prize at the end of the rainbow if you entered this thing.”

Sonnen also expressed how frustrated Matt Mitrione must feel, given that he had put himself in pole position for the title with his first-round win over MMA legend Fedor Emelianenko earlier this year:

“Matt Mitrione is probably looking at this like, ‘What are you talking about?’” Sonnen said.

“He’s the number one contender for the heavyweight class. He’s been around and he’s got the wins over the right guys and he’s probably going, ‘I’m one fight away from the belt and now you’re telling me I gotta do three fights to be the champion?’

“You put me in there, I never even thought about being a heavyweight. Now I’ve only got to win three and I could be the heavyweight champion.

“It’s a different perspective for people like me. For me, it’s a big opportunity. I imagine for Mitrione it’s like, ‘Come on, you’ve got to be kidding me. I’m the top contender and now I’ve got to go through three guys.’”

Sonnen spoke to ESPN about the tournament and gave a little breakdown of each fight in the first round:

“Rampage and I have heat that goes way back. Last time we were together, we had to be separated in a hotel lobby in Arizona. I always thought that match could happen, but I thought it was impossible because he was going back to the UFC. Contractually, I’m not privy to how that worked out, but I’m happy it did. What other reason is there to fight than two guys want to?”

“Ugh, Mitrione got a bad deal in some ways. He was one fight away from being a world champion. Now he finds out he’s three fights away. He and I must have had completely opposite perspectives when we got the news. He must have said, “Oh, geez, you’re telling me I need to win three fights?” I got the phone call and said, “Wow, I can win three fights and be a world champion? I didn’t see that coming.” I think Mitrione is the best heavyweight out there. When I say that, it’s usually met with resistance, but it’s my opinion and I mean it. They have fought before though, and Roy beat him (December 2012). That does matter and they both remember that.”

“Love this fight. Pride champion vs. UFC champion. I don’t know if I agree that Fedor’s been as rusty as others think. You take that Mitrione fight (TKO loss in June), Fedor knocked Mitrione out — it just turned out he was knocked out at the exact same time. That was just a really weird match. But go back to when Fabricio Werdum beat him (June 2010), none of us knew how good Werdum was. Take when Antonio Silva beat him (February 2011). You want to talk about size disadvantages? Silva goes in there close to 300 pounds. I would never take my eye off the Fedor ball. I have always respected him and still do.”

“I didn’t fully get it at first. You’ve got the light heavyweight champion in Bader, taking on a fellow light heavyweight in Mo, but the belt isn’t on the line. So, let’s say Mo wins, beats the light heavyweight champion … he doesn’t become the champion? Just the drama in that is compelling. It’s going to piss a lot of people off, which is good for the sport, right? Get people arguing about something. Those are the two most athletic guys. They actually met up in college wrestling (in 2003), quarterfinals of the NCAAs, and Mo beat him pretty soundly. So, Mo knows he can beat him, believes he can beat him — and Bader wants that back. That’s very interesting.”