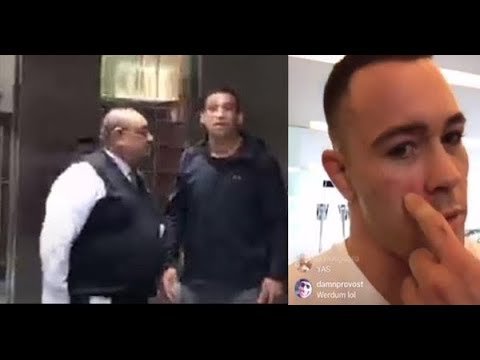 Werdum is preparing to face Marcin Tybura in the main event of UFC Fight Night 121 this Saturday night (Nov. 18).

Covington released a clip on Wednesday showing a confrontation with Werdum. “Chaos” later claimed that the Brazilian punched him in the face.

Now Legal action is on the cards following the heated exchange between the controversial Covington and Werdum. Covington has brought his allegations against Werdum to the authorities in Australia and is seeking to press charges against the UFC Sydney heavyweight.

Werdum recently told FloCombat that he did not punch Covington, but that “Chaos” was responsible for instigating trouble:

“This guy is really audacious,” Werdum said. “I went down with my master [Rafael Cordeiro]: ‘Master, let’s get a haircut and shave the beard.’ We were in the lobby, and I’ve never seen this guy before. When I walked he looked at me and said: ‘Brazilian animals.’ And I was like: ‘Hey.’ I slapped his phone and asked, ‘What did you say?’ Then, he kicked my leg, but I managed to defend. Then the guys got in the middle and had nothing left. But he kicked me, he is audacious. I could have hurt myself.

“If I had hit him in the face, he would be in the hospital,” Werdum continued. “Certainly. There was no punch, he’s crazy.”

Sherdog.com’s Jeff Sherwood later reported that there is clear footage of the incident showing Werdum striking Covington and an an eye-witness is supporting Covington’s claims:

I just got confirmation that @ColbyCovMMA is pressing charges against @FabricioWerdum. I also heard the security video shows Werdum punching Colby and the police have it. Plus there’s an eye witness that was there from start to finish. #theplotthickens #Letsseehowthisplaysout

“I just got confirmation that @ColbyCovMMA is pressing charges against @FabricioWerdum. I also heard the security video shows Werdum punching Colby and the police have it. Plus there’s an eye witness that was there from start to finish. #theplotthickens #Letsseehowthisplaysout,” Sherwood stated.

Werdum denied that Covington’s negative remarks about Brazil had any influence in their altercation:

“The guys think you can say whatever you want, and it’s not like that. He didn’t respect Brazil his last fight. He said a lot of bad things, and it’s not good.

“This is nothing. I don’t like the guy saying a lot of bad things. But with me, it’s different. I never start saying bad things. I just stay quiet. If the guy says something, I’ll respond for sure. But my big focus is the fight.”

Werdum also told Submission Radio that he did nothing but throw a boomerang towards Covington and jokingly feigned surprise that it didn’t come back:

“No, [nothing interesting happened yesterday],” Werdum said. “I have a good breakfast. That’s it you know. I don’t like the guy. He said bad things. Colby [Covington] seen me in the lobby. I never see him before. He said, ‘Brazilian animals.’ I say, what? I slap his phone and he drop his phone. He kick me in my leg. Good kick, but I block his kick. After that, that’s it. I had a fan give me a boomerang. I just throw it, that’s it. The boomerang is from here. I thought if I drop the boomerang, it’d come back to me, but no.”

Werdum may not be laughing for long, however, as New South Wales Police took to Facebook to confirm charges have been pressed against the Brazilian veteran:

“A man will face court after he allegedly assaulted a man with a boomerang yesterday.About 1.30pm (Thursday 16 November 2017), a 40-year-old man and a 29-year-old man became involved in an altercation outside a hotel on George Street, Sydney.The incident escalated when the 40-year-old man allegedly threw a bag containing the boomerang at the other man, which hit him in the neck.Officers from Sydney City Local Area Command were later alerted to the incident and commenced investigations.

Following inquiries, a 40-year-old man was issued with a Field Court Attendance Notice for common assault. He is expected to appear at Downing Centre Local Court on Wednesday 13 December 2017.

Werdum will likely counter-charge Covington, although the welterweight denies any wrongdoing:

“That’s a complete lie,” Covington said. “He wrote a check his ass can’t cash. He’s on video so all his lies will be told soon.”