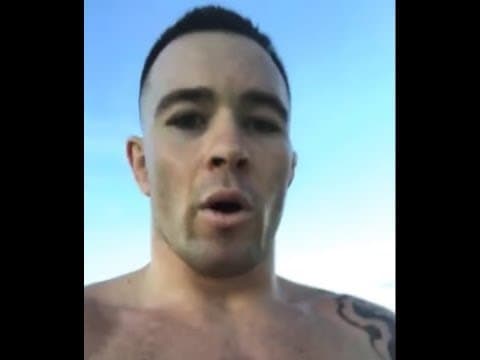 Outspoken welterweight contender Colby Covington has claimed that he is ready for his first shot at the UFC welterweight title, eyeing a fight against Tyron Woodley next month

Having done everything he can to push himself up the ladder of the 170-pound division, including a great performance against Demian Maia and some abrasive and head shaking behavior thereafter, Covington believes he is ready.

In fact, “Chaos” is already training for the fight on Dec. 30:

“The real reason I am out here is to get that roadwork in,” Colby said in the video you can watch above. “I am training for Tyron Woodley man; December 30. He issued a challenge: he wanted to fight a lightweight, Nate Diaz, but that ain’t gonna happen. So, you know, Tyron is in training and getting ready. So Colby “Mr. Bad Guy” himself Covington is ready to go. Let’s see if Tyron takes the challenge.

Covington believes that an alleged training session between himself and Woodley, where the former believes he got the upper hand, has ‘scared’ the champion:

“We are going to keep training and we will be prepared for Tyron Woodley if he wants to come out and fight at UFC 219 in Las Vegas against the real welterweight champion of the world baby. I have a better record in the UFC than Tyron. I’m more active. He’s scared. He’s ducking me. He knows what happened when we trained together at ATT.

“We need to get this fight going already. If he doesn’t want to do it December 30, then we could do it in St. Louis in January. Even February. Whenever they’ve got a UFC. Tyron is ducking me clearly and is scared of me. I just want to let all my fans and haters know the real truth. I am staying ready. I am on call for UFC 219 on December 30 against Tyron ‘The Chosen Excuse Maker’ Woodley!”

It will take more than a video to persuade Woodley that Covington is the right opponent, however. “The Chosen One” recently appeared on an episode of The MMA Hour with Ariel Helwani, where he described Covington’s antics as ’embarrassing’ and essentially laughed off any suggestion that he is deserving of a title shot:

“When I’m looking down the scope and I’m looking through my sniper rifle, you’re (Covington) not in the crosshairs,” Woodley told Ariel Helwani on Monday. “There’s so many other fighters that are right in that mix that I’m looking at. There’s guys who are fighting, maybe rematches and former champions from different divisions, and people who are really running through it. There’s a lot of hungry guys, and he’s in that category with guys like Darren Till, Kamaru Usman. He’s right in there.

“When you’ve got a person who, he had 5,000 followers until he disrespected an entire country, he doesn’t quite put himself on that same radar,” Woodley said. “When you’ve got a person who fabricates and makes up stories — Chael Sonnen was good at it, Michael Bisping is good at it, Conor McGregor is the best at it. If you’re going to go that road, at least sound right. Don’t on one hand be (saying), ‘I’m this tough guy,’ and your script sound stupid.”

Woodley also criticized Covington’s fighting style and questioned if fans would pay to watch someone ‘take somebody down over and over again’:

“Fans want to see blood and knockouts. They don’t want to see some guy just take somebody down over and over again. So I just find it really corny. And yeah, it’s worked, he talked himself into the Demian Maia and Dong Hyun Kim (fights), two guys I (beat). I wrote the book on Maia; he went out and checked it out at the library. Checked the book out, read it, and went out there and got bloodied by a jiu-jitsu guy. Now he thinks he’s going to fight for a title. Sit down somewhere. He’s embarrassing himself.”

“I like to let the things in training camp stay in training camp, but his (story) is so hilarious, (with) how many eyewitnesses (we had), so much video,” Woodley said. “Like, I don’t know if he remembers that my gym is camera-ed, so there’s so many videos that show the training. It’s just funny that he would just go on this rant, because he knows. I told him personally. … ‘Do whatever you want to do with it. If this how you feel like you need to make your name, have at it, do what you need to do.’ I said, ‘But I’m not going to give you the time of day.’

“When he was the up-and-coming wrestler import, I was the guy who was like, ‘Oh, look, Colby’s here, he’s a wrestler too,’ kinda show him the ropes kind of deal. No respect, man. I remember what I paid him for training camp, that was all the money he had to his name, what I gave him. It was his whole life savings, what I paid him in training camp. Just the irony of this guy.”