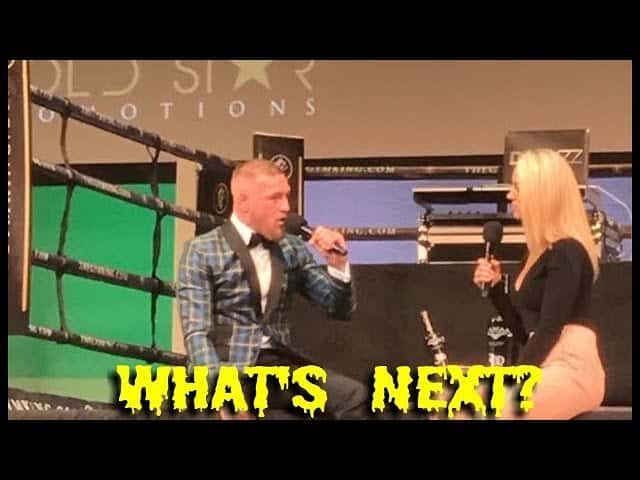 Conor McGregor addressed his fans in Glasgow, Scotland on Friday night in a Q&A where he touched upon his future plans ahead of his return to fighting

The opportunities are endless, according to the UFC’s star man.

Among the highlights of the evening was the suggestion by McGregor that there could very well be a chance to set up another money-spinning boxing bout with Floyd Mayweather Jr. Should he return to the UFC, a lightweight title fight against Khabib Nurmagomedov is an appealing option, per the 29-year-old in an appearance at a speaking event in Glasgow, Scotland on Friday (transcription via MMAFighting.com):

“I’m sitting on a loss in my mind, so I’m just seeing what options are there,” McGregor told Caroline Pearce at An Evening with Conor McGregor at Glasgow’s SEC Armadillo venue.

McGregor also had time to discuss Tony Ferguson and Kevin Lee’s UFC 216 interim lightweight title fight, claiming that the winner could also be his next opponent:

“An option; there’s an interim belt on the line right now – that’s an option,” McGregor said.

“Too many of them pull out right at the wire and we’re still not at this fight yet, so I’m just going to pray that this one goes ahead. Of course, Nate is still there waiting, but he’ll be left waiting until we figure something out.”

“I’m just going to put a few options out there and see what bounces back. It’s got to excite me, let me see what these two fools do this weekend. We’ll see what the energy is like.”

To say McGregor is a man who is not short of options would be to point out that the sky is blue. The Dubliner even suggested an MMA fight with Paulie Malignaggi:

“Of course the Nate Diaz trilogy fight is there. Maybe one of these boxing guys…maybe Malignaggi would come over and do an MMA bout…or Floyd, maybe I could entice Floyd back.

“We could either do a rematch in boxing, or like he said originally, we’ll do an MMA fight next. They are the options that are on the table for me right now.”

“There’s also that Gaethje guy, he’s fighting another guy that I fought for the title, Eddie Alvarez. I’m looking forward to seeing what happens there. He’s an undefeated fighter and Eddie could come back.

“I just want to see them fight. They’re talking about me fighting? I’m the one going into other peoples’ domains and fighting. They’re sitting on Twitter typing away and complaining. I’m in there trying to do it.”

While Dana White said recently that there was scope for a fight between Conor McGregor and Khabib Nurmagomedov in Russia, McGregor agrees that it may be an enticing option:

“Again, [Khabib] that’s another option. That’s definitely an option. As I said earlier about the other two that are fighting, I’m just happy to see them fighting.

“Obviously, Khabib in Russia would be a great one. It would be a crazy one. We’ll see what happens. I’ll need to see him make weight though. There’s no way I’m going over there and he’s not making weight. I need assurance.”

McGregor also referenced a man many believe the Irishman could fight further down the lin – former UFC welterweight Georges St-Pierre. The only problem for McGregor is that, for him, UFC middleweight champion Michael Bisping beats him on the night:

“It’s another money fight, even though he’s been retired,” he said. “I don’t know, I think he’s going to get his ass whooped by Bisping. To be honest I think it’s a mistake for him to step in at that weight after so long out.”

McGregor is expected to announce his comeback opponent soon, with all indications pointing towards a potentially record-breaking third bout with Nate Diaz. The existing pay-per-view record was set by Diaz vs. McGregor II in Aug. 26 and the UFC are likely to push for a third fight given the potential to make another boatload of cash.

For now, we will just have to wait and see…