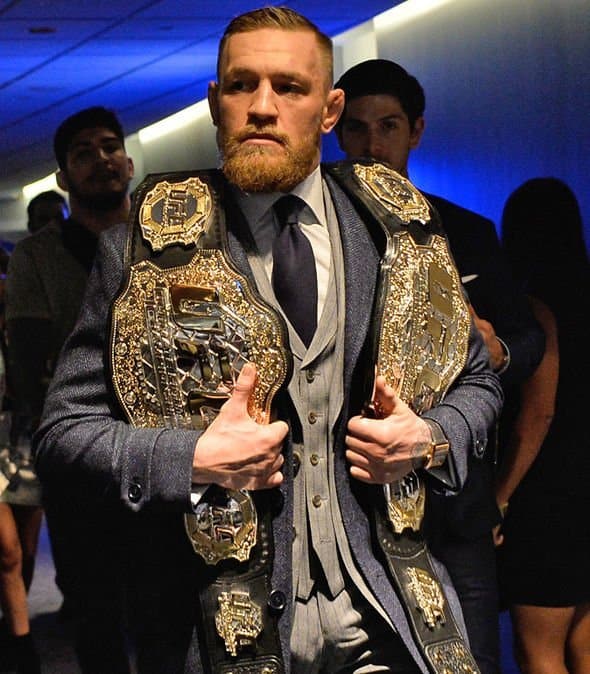 UFC lightweight champion Conor McGregor is keeping tight-lipped on his future plans, despite calls for him to defend his 155-pound title

McGregor has never shied away from his desire to make as much money as he can from his talents.

While the UFC megastar has polarized MMA fans due to his brash and sometimes abrasive behavior, it is the 29-year-old’s lack of title defenses which have led to many fans’ frustration. Having captured the 145-pound strap with a spectacular 13-second knockout of Jose Aldo at UFC 194 in Dec. 2015, the Irishman aimed to add another title to his collection a few months later when he was given a shot at then-lightweight champion Rafael dos Anjos.

Dos Anjos pulled out of that fight with a foot injury, sending the UFC into a scramble to secure an opponent to step in to headline UFC 196. Nate Diaz, although renowned as a lightweight, eventually got the nod with little time to prepare for McGregor. The Stockton-native allegedly accepted the bout at 170-pounds and the fight was set. Diaz, with only weeks of preparation, choked McGregor out and transitioned from fan-favorite to superstar in his own right.

McGregor, rather than defend his 145-pound title, opted to rematch Diaz at UFC 202 the following August, scraping home on the judges’ scorecards by the skin of his teeth. Having announced his intentions to fight one last time in 2016, the 145-pound division was once again without a title defense for its champion as “The Notorious” opted to make history and challenge new champion Eddie Alvarez at Madison Square Garden in Nov. 2016. McGregor became the first fighter to hold two straps in two weight classes at the same time before he was stripped of his featherweight title earlier this year.

The outspoken Crumlin-native announced that he would be taking time away from the sport to await the birth of his first child, prior to an announcement that he would be returning to competitive action…although not in MMA. Floyd Mayweather Jr. vs. Conor McGregor became one of the highest grossing fights of all time, with McGregor’s boxing debut lasting almost ten rounds with the all-time great. It is estimated that the Crumlin-native made approximately $100 million dollars for his troubles.

So with 2017 almost over and McGregor having a bank account to make the rest of the MMA world green with envy, there is still no sign of a return to the promotion which made him a superstar. Having captured the featherweight title in 2015 and the lightweight version the year after, it is almost two years since McGregor has been a champion, yet, there is not one single title defense on his record. While he is still the lightweight champion, there has been nothing more than Dana White’s word and his own admission that he was in negotiations with interim-champion Tony Ferguson to suggest any change to that record.

Ferguson was reportedly offered a bout with Khabib Nurmagomedov at UFC 219 next month, despite the Russian having already signed a deal with Edson Barboza to feature on that card. This in itself is enough to convince even the most optimistic of fans who wait patiently for an announcement of McGregor’s return to give up all hope of him fighting at UFC 219.

To be clear I was offered to fight @TonyFergusonXT on December 30th and I accepted the fight but my focus is barboza. @danawhite @ufc

While Ferguson and Nurmagomedov have seen three scheduled bouts fall apart in the past, many believe that it is the fight to make in the UFC. Had McGregor not locked the entire lightweight division down for the majority of 2017, it is no far stretch to suggest that either man would be champion by now. The UFC’s 155-pound division is arguably the strongest in the promotion yet has suffered a horrendous year due to injuries, canceled bouts but mostly due to the absence of its champion.

The pinnacle of many fighters’ careers is winning a title and McGregor has two to his name. The star appeal may have given him an accelerated route to a featherweight title shot and that title, once captured, both enhanced his star power and allowed the UFC to skip the queue in the 155-pound division and place him opposite the former champion Eddie Alvarez at UFC 205.

Although he had his featherweight title stripped not long after, it was OK, as he was still the lightweight champion which made a fight against Mayweather appear to be a legitimate clash between two top fighters who were respective “champions” (although Mayweather had retired, he was unbeaten and is regarded as the greatest boxer of the past 25 years). Without that title, a Mayweather bout would not have been as appealing to casual fans. McGregor got the fight, took a serious wedge from fans and has given nothing in return to those who have [pun unintended] defended his lack of title defenses.

It is clear that “The Notorious” has used the title of “champion” to further his own cause and as a bargaining chip to make money the rest of us can only dream of. For that, hats off to him. On the flip side, this is a sport. Many MMA fans are, oddly enough, more concerned with what fighters can do inside the cage rather than how far they can push their bank balances.

McGregor needs to defend or vacate, at least for the sake of the sport.