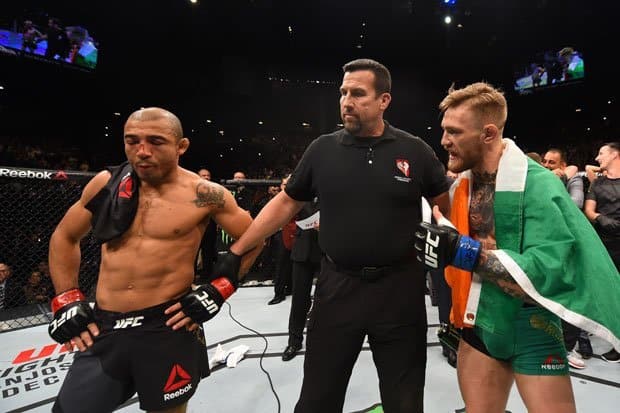 Conor McGregor has been slammed once again by former opponent Jose Aldo, who intends to ‘start again’ in his pursuit of the 145-pound title

Aldo, currently gearing up for his first foray into competitive Jiu-Jitsu, has ruled himself out of an immediate rematch with current UFC featherweight champion Max Holloway. Aldo believes that it should be Frankie Edgar who gets the next shot:

“No doubt that Edgar is (the next title contender). Their fight will be in November. I know Edgar will be the next challenger,” Aldo told Ag. Fight. “I’m not thinking about being champion (in the short term), the game has restarted. I have to start over, with my head focused on the next opponent, and (continue) like that until I fight for the belt again. That’s what I have in mind.”

Aldo, to the joy of his loyal-legion of fans, has confirmed that he is planning to return to the octagon later this year. Putting rest to speculation claiming “Scarface” will be looking to move up to lightweight, Aldo clearly believes there is unfinished business at 145-pounds:

“We’re already talking, I’m back to training,” he said. “I’m waiting for my time to come back to fighting, but I can’t say anything until it’s done. I’ll fight at featherweight, there’s no reason to move up to lightweight. That division is not moving, nobody knows what will happen there. I’m a featherweight. … I’ll fight in December, at most, but if I can fight earlier, in November…”

The Brazilian, who is clearly still resentful of the 13-second knockout at the hands of Conor McGregor at UFC 194 in 2015, claimed that Max Holloway is ‘deserving’ of his title in comparison to the Irishman:

“He’s the true champion, has his first title defense coming,” Aldo said of Holloway. “McGregor was never a champion of anything. He defeated the champion and left. A real champion has to defend (the belt). I speak for Holloway because, win or lose (against Edgar), he will be there fighting. I’m happy that Holloway is the champion. An example, someone who deserved being where he is.”