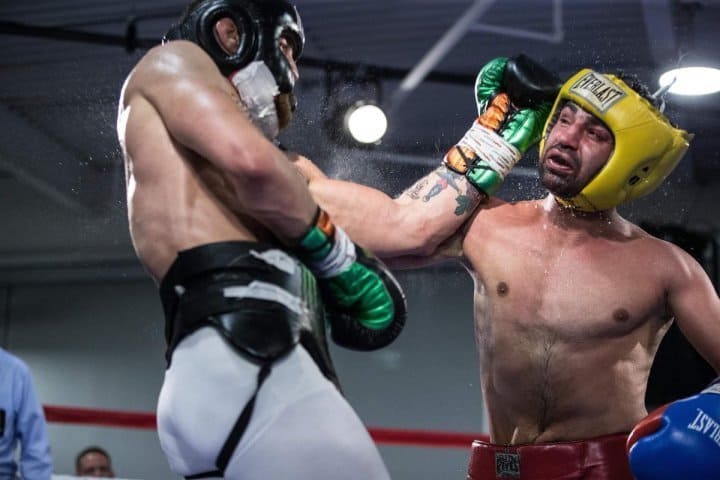 Conor McGregor lost his most high profile sparring partner in Paulie Malignaggi earlier this week in controversial circumstances, but is there a hidden agenda at play

When former two-time boxing world champion Malignaggi left McGregor’s camp having joined the UFC lightweight champion in his preparations ahead of his boxing bout with Floyd Mayweather Jr, eyebrows were raised.

The New York-based former fighter and current Showtime boxing commentator was vocal about what he saw as a “set-up” of sorts accountable to Team McGregor and their distasteful way of treating the 36-year-old. On Thursday, Malignaggi took to Instagram to confirm that he had departed the Irishman’s camp:

Malignaggi told ESPN that he had felt “set up” by McGregor, feeling that there was a hidden agenda behind the decision to request him into camp:

“[There was a] lot of violence,” Malignaggi said. “I went in there to prove a point. I didn’t like the fact I had to fly across the country on Monday, and they have me scheduled for 12 [rounds] on Tuesday. I thought it was a little bit of a setup.

“Usually all sparring is private. I show up at the UFC headquarters and [former owner, Lorenzo] Fertitta is there. [UFC president] Dana White is there. So, I’m thinking these guys are thinking they’ll catch me right off the flight, set me up for him to look good in front of his audience. I didn’t like that. I kind of went in with a chip on my shoulder.”

Malignaggi, having already felt that there were dirty tactics at play, was taken aback to see that the Irishman’s camp had released a photo which purported to show him getting dropped by McGregor. Malignaggi insisted that photo was the result of a “push down” by McGregor:

“I actually beat his ass, 24 hrs off a flight 2 lol, which is why Im saying post the vid, I try not 2 be petty but seems it’s late 4 that now,” Malignaggi tweeted.

The result of Malignaggi’s experiences appears to have culminated in the former boxer teasing that he will leak information to the world regarding the scenes and progress inside McGregor’s camp. On Saturday, the “Magic Man” took to Twitter to state that the UFC lightweight champion “whimpers like a girl” when hit and to reiterate that the experience has left him with no doubts that it was a “set up” all along:

Yea but this coming week I'll actually start to discuss a bit what happened Tuesday, he whimpers like a girl when he gets ripped to body lol https://t.co/lfcuILlubJ

When Malignaggi was drafted into McGregor’s camp, eyebrows were raised. Both men had their own verbal spat earlier this year, which was highlighted when the boxer publicly declared that he would ‘knock the beard off’ the UFC superstar. Both men were not believed to hold too much admiration for one another, to say the least.

Another interesting aspect of the McGregor/Malignaggi dynamic is the proximity the latter has in terms of a relationship with Showtime, the company who is a major force behind the Mayweather vs. McGregor super fight. Malignaggi works as a commentator for the entertainment giant who has televised and managed Floyd Mayweather’s broadcasts of fights since 2013. Although “Money” had been retired since 2015 prior to accepting the fight with McGregor, Malignaggi’s place on their payroll always made McGregor’s request to bring him into camp it a curious choice, at best.

When anything of this level occurs in sport, there is generally a steady supply of conspiracy theories to entertain. According to some, the public fall out between McGregor and Malignaggi is a ploy which has been designed to assist faltering ticket sales and keep the fight in the headlines.

ESPN’s Darren Rovell took to Twitter to confirm that 3,000 seats were still available for the event as of the fourth day of sales. To put this into perspective, Manny Pacquiao and Floyd Mayweather’s 2015 bout sold out in less than 60 seconds. Early ticket sales are certainly failing to live up to expectations, given the magnitude of the event.

Whether Malignaggi’s assertions are true or that the entire debacle was a ploy to move tickets and drive publicity up is unknown, but what can be expected is that there will be more to come in terms of publicity ahead of the “Money Fight” on Aug. 26.