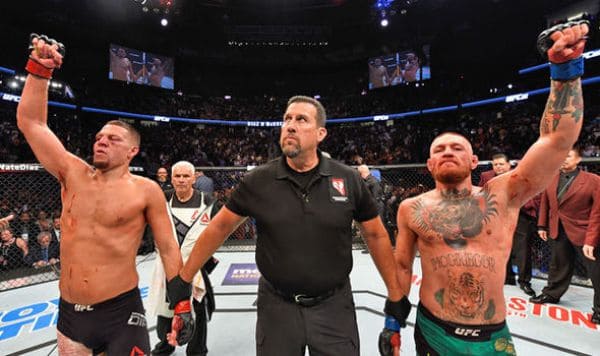 Conor McGregor: The UFC lightweight champion and future Hall of Famer may be the most polarizing figure in the MMA community

There is no doubt, however, that he has had some pretty big moments in the UFC.

McGregor is simply a fighter like none other ever witnessed in Mixed Martial Arts. The Irishman has garnered a massive legion of fans over the years with his brash, trash-talking exploits outside of the cage and his slick skills inside of it, breaking records and making unprecedented amounts of money for an MMA fighter.

Regardless of his accomplishments, “The Notorious” has also earned a large number of detractors who have become disillusioned with the perceived favoritism he has received from the UFC. Despite winning the featherweight title with a 13-second KO over Jose Aldo in 2015 at UFC 194 and becoming the first fighter to hold two world titles in two separate weight classes simultaneously, McGregor has never defended a title.

Having survived off of welfare checks 5 years ago, the Dublin-native has become a self-made millionaire off the back of some pretty hard graft and his world-famous personality. Having talked himself into a bout against the greatest boxer of his generation in Floyd Mayweather last month, McGregor added an estimated $100 million + to his already healthy bank balance.

As for his fighting, however, there are many examples of when the Dublin-native backed up his big mouth. We take a look at his 5 greatest career performances in the UFC in the list below: Last minute replacement, Chad Mendes, took McGregor down three times in the first round and kept him there for most of the second. McGregor, spending most of the fight on his back, ate shots from above while attempting to stay in the fight. Mendes botched a guillotine-choke attempt, allowing McGregor to rise to his feet and knock “Money” out with just three seconds left in the round.

McGregor was convincing in the first round but suffered a painful ACL tear in the second which should have given Holloway the advantage. Despite the injury, McGregor turned in an impressive performance where he utilized his rarely seen ground game and all-round skillset to turn the younger (and taller) man over.

The famous 13-second knockout of the dominant featherweight champion Jose Aldo at UFC 194. McGregor was to finally be matched with a dominant world champion who could command the title of the world’s pound-for-pound best fighter.

Many had tipped McGregor to join Aldo’s ranks of conquered challengers, citing the Brazilian pound-for-pound #1 as having the tools necessary to expose the Irishman.

One of the greatest fights of all time? The bout was an absolute war of attrition between both men, but neither relented. McGregor dropped Diaz on numerous occasions and ate some pretty big shots (and slaps) from the man who had beaten him at UFC 196 earlier that year.

McGregor absolutely dominated and outclassed Alvarez from the outset with excellent strikes from range which were timed to perfection. The champion was dropped in the first round which spelled a long night for the Philadelphian. Come Round 2, that long night became a lot shorter when McGregor once again dropped the 155-pound king, following up with Alvarez laid out before the fight was stopped and McGregor made history.

McGregor is expected to make his much-anticipated return to action in 2018, although he has not exclusively announced that he will not fight before then. Following the massively lucrative bout with Mayweather in August, many have argued that the Irishman will find it hard to motivate himself for UFC purses having hauled in a ridiculous amount of cash in his pro boxing debut.

Should “The Notorious” indeed return, then the obvious prime candidate for his first fight back in the octagon will be Nate Diaz. Diaz is considered McGregor’s biggest rival and more importantly to the UFC, the biggest fight in terms of pay-per-view revenue. The 29-year-old could realistically defend a UFC title for the first time while settling the rubber match at the same time. With Diaz and McGregor both one apiece from their two prior meetings, it does seem the fight to make.