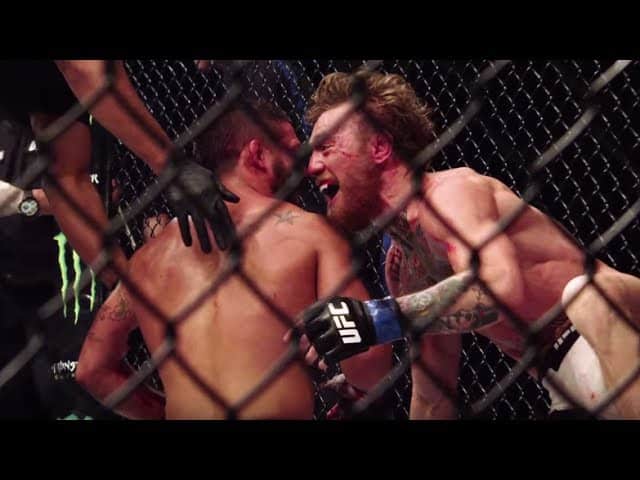 Having arrived on the scene in the UFC in 2013, the Irishman rapidly ascended through the featherweight division.

McGregor secured the 145-pound title with the most spectacular of knockouts against former dominant champ, Jose Aldo, at UFC 194 in Dec. 2015. What was perhaps most interesting about the braggadocious Irishman was his razor-sharp wit and incredible confidence, which was compounded by his ability to belittle, antagonize and mentally short circuit opponents before fights.

Aldo’s inability to respond to McGregor directly (due to him only speaking Portuguese) was argued to be one of the chief reasons for his frustration. While only understanding the level of verbal brutality McGregor was aiming at him via his interpreter, Aldo was effectively undone mentality by the SBG Ireland star’s ability to get inside of his head.

“If he shows up, I feel I’ll KO him inside one… I feel every single movement I make will get an overreaction off of him because he’s emotionally invested,” McGregor said, “and there’s too much in it for him. … I feel if I just [make a small movement] he will react a million times too much. So that’s how I see the fight playing out. I feel him overreacting, overextending and then being [knocked out] unconscious.”

“The Notorious” did not reserve his verbal assaults for just his opponents, however, as he often insulted and ridiculed those in higher weight classes or some who made the mistake of challenging him. From Donald “Cowboy” Cerrone to Brock Lesnar, none were safe from the Dubliner’s insults and hilarious put downs over the past few years.

The video below is a good example of how McGregor takes his trash talk into the arena. The 29-year-old is a firm believer in his ability to beat someone mentally prior to engaging with them in the octagon. When McGregor fought Chad Mendes in 2015, he was relentless in his ‘sh*t talk’ against the former contender, punctuating his relentless attitude by mocking his opponent’s inability to hurt him:

McGregor as a fighter is one who approaches a bout having carefully analyzed his opponent – the Irishman adopts the same approach to his trash talking. Not only does McGregor pinpoint the potential insecurities and/or perceived weaknesses of a potential opponent when berating them, but he almost uses these as a mantra when speaking to the media.

In the lead up to his Aug. 26 bout with Floyd Mayweather Jr., McGregor alluded to Mayweather’s financial issues with the IRS with one particular remark: “he’s in a f**kin’ track suit. He can’t even afford a suit anymore!”

When comparing boxing with MMA, McGregor also made a valid but heavy point regarding the true strengths he enjoys over Mayweather as a man:

“He is f–ked! There’s no other way about it. His little legs, his little core, his little head. I’m gonna knock him out inside four rounds, mark my words. … He’s fought people who have shied away from him. I don’t fear him. I don’t fear his limited set of fighting. This is a limited set of rules that makes this half a fight, a quarter of a fight. This isn’t a true fight. If this was a true fight, it wouldn’t even take one round.”

Regardless of the result on Saturday night, McGregor’s ability to realize what he speaks much be lauded. In 2016, Leonard Ellerbe (Mayweather Promotions CEO) told ESPN that McGregor’s successful application for a boxing license was nothing more than “a calculated effort to gain more fans.”

“What McGregor is attempting to do is take a page out of Floyd’s book from the marketing and promotional side by using his name.

“The quickest way to become famous is to align yourself with another famous person, and he’s done a good job of that.”

Ellerbe did not mince his words when asked about McGregor’s challenge to “TBE”:

“He has a good little hand game, a superior hand game compared to the UFC fighters he is competing with but fighting Floyd Mayweather is a whole other story,” Ellerbe said.

“That bulls**** you’re throwing over there in UFC would get you killed against Floyd.”

Until now, McGregor’s greatest achievement is talking his way into a boxing bout with arguably the greatest to ever do it. Should he pull off a win, then he will surely take his place among the ranks of the true icons in sporting history.