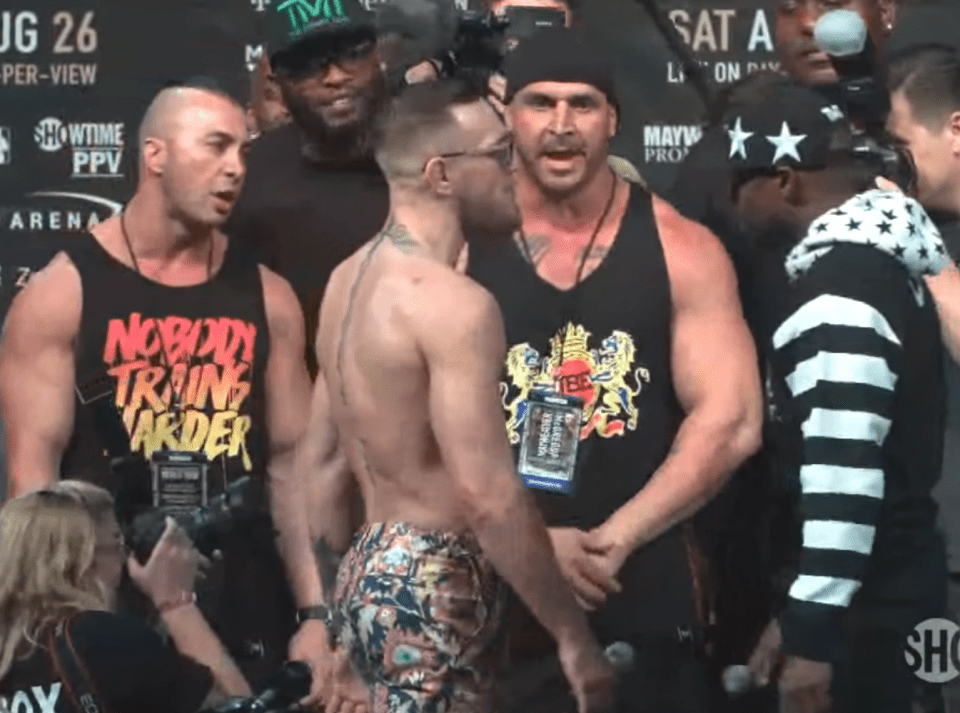 Those hoping for a rematch between UFC lightweight champion Conor McGregor and Floyd Mayweather Jr. look set to be disappointed, as the Irishman has claimed that the boxing legend is ‘out of negotiations’

Mayweather vs. McGregor went down in Las Vegas on Aug. 2017 and was a highly lucrative bout for both men. Having made the move across to the squared circle, “The Notorious” was expected to leave his boxing career on ice for a return to MMA. Mayweather, who had not been taken seriously when he repeatedly suggested he would be open to a rematch with the 29-year-old inside the Octagon, looks set to be crossed off the list of potential opponents… for now.

Just saw @FloydMayweather as I was walking backstage and asked him if he's serious about a rematch with @TheNotoriousMMA in MMA: "I already fought Conor, and we're at a basketball game, not an MMA match."

McGregor, who had been quite active of late on social media, took to Instagram on Sunday to claim Mayweather was simply out of negotiations for another money-spinning bout:

I am happy for Floyd and his recent announcement that he is out of these current fight negotiations. It is the reason I never seeked the rematch in the first place. I was happy for him in retirement. My game is a very unforgiving one. It is not like other games. I understand completely him staying retired. I will now carry on in my negotiations and see where it goes. Have a great retirement Junior. Now come here and give your old man a hug for old times sake. I'm proud of you son. Yours truly, Senior.

“I am happy for Floyd and his recent announcement that he is out of these current fight negotiations,” McGregor wrote. “It is the reason I never seeked the rematch in the first place. I was happy for him in retirement.
My game is a very unforgiving one. It is not like other games.
I understand completely him staying retired. I will now carry on in my negotiations and see where it goes.
Have a great retirement Junior.
Now come here and give your old man a hug for old times sake. I’m proud of you son.
Yours truly,
Senior.”

It is still unclear if there were negotiations, to begin with, but this will come as somewhat encouraging to those who are hoping the mercurial Irishman will make a return to competitive MMA. With Tony Ferguson currently holding the interim lightweight title, and set to defend it against Khabib Nurmagomedov in April, the prospect of the UFC’s biggest star heading back to the promotion looks a little better, at least.

Heavyweight prospect Blaydes told BJPenn.com that he believes the fight will be an interesting contest:

“It’s a good matchup. I like it, seeing as DC is a former Strikeforce heavyweight champion and he is, I think, undefeated as a heavyweight. He knows how – he wouldn’t be at a disadvantage. I think [their] weights will be a lot closer than people think. [Cormier will] probably be 235 [pounds] and Stipe will probably be around 245-250, and at heavyweight, that’s not really much of a difference. And [Cormier is] used to being the smaller guy so you don’t have to worry.”

Blaydes also claimed that he would see Miocic as the greatest heavyweight of all time if he can manage to see off the challenge of Cormier.

“I think Stipe wins, though, because he’s a very confident striker and I think he’s an underrated wrestler,” Blaydes said. “Well, he shouldn’t be underrated because we all saw what he did to Ngannou, and personally I got the opportunity to train with [Miocic] early on in my amateur career a couple years ago, and we went at it with the wrestling, so I definitely respect his ground game. And I know he has cardio because we used to do cardio practices and he would just kill it.

“My goals are to get to his cardio level,” Blaydes continued. “He would do the Jacob’s Ladder and then he’d do the agility drills and then he’d hit the bag, then we’d do pool workouts. He’s like a fish. He can swim very well. He’s just an athlete and he’s got a hell of cardio, and we know he’s tough as nails, so I don’t get why he gets looked over so much. He’s earned his position. I think if he does win he has to go down at the best heavyweight ever.”