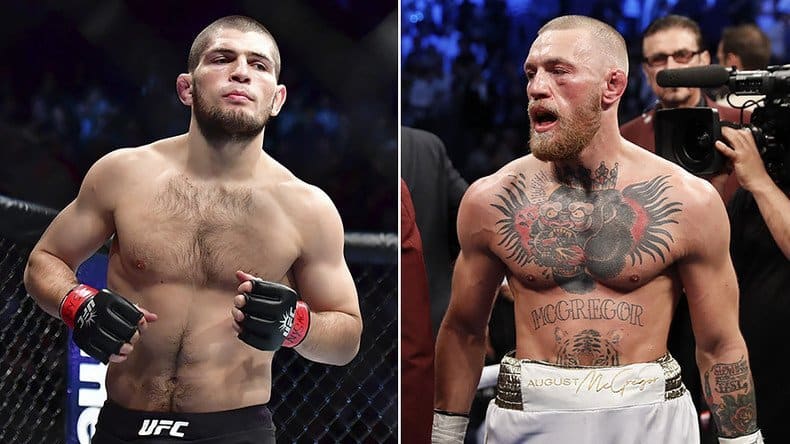 Nurmagomedov believes that it will be McGregor who will be challenging for the title, however.

The Dagestani MMA icon recently spoke to ESPN about his preparations for his upcoming co-main bout against Edson Barboza at UFC 219. Long considered to have trouble making 155-pounds, Nurmagomedov has been also plagued with injury throughout his spell with the promotion and was forced to pull out of the biggest fight of his career against Tony Ferguson at UFC 209 earlier this year.

Having missed out on a shot at the interim-lightweight title Ferguson later captured against Kevin Lee, “The Eagle” claims that the anxiety surrounding his ability to make weight this time around will, in turn, make for an exciting weigh in:

Nurmagomedov was hospitalized on the day of the weigh-ins for his meeting with Ferguson having suffered severe abdominal pain. The 29-year-old claims that the result of problems which later turned out to be associated with his liver could have cost him his life:

“To be honest, I don’t remember this time,” Nurmagomedov says. “I don’t remember what happened. They brought me to the hospital and I only remember feeling something so bad. I almost died.”

Nurmagomedov’s manager, Ali Abdelaziz, said that his fighter had cut weight the day before the UFC 209 weigh-in, before heading back to the MGM Grand Hotel to rest. Targeting an additional five-pound cut the next morning, Nurmagomedov suffered excruciating pain and could not sleep throughout the night:

“We were going to wake up the morning of the weigh-in and make 155 pounds,” Abdelaziz said. “When we went to the room, he couldn’t sleep. He was in a lot of pain. It was an ugly, ugly night. I don’t even want to talk about it.”

Nurmagomedov returned to Russia not long after and before undergoing back surgery in Germany. The fighter and his team essentially kept everything in-camp, to the level that no one had any idea how he was progressing following the botched weight cut. Further speculation mounted on his ability to return to fighting at all, given his past experiences, and the Dagestani feels that there may be something of a point to prove at UFC 219:

“This fight is very important, because people are talking about how I can not make weight,” Nurmagomedov says. “The last time, this was my fault. That’s why people are waiting — to see if I can make weight and stay busy.

With the incumbent champion Conor McGregor seemingly reluctant to defend his title, Nurmagomedov believes that it is just a matter of time before he is stripped. The ideal scenario for him (one which he believes the UFC also share) is for McGregor to eventually challenge him in his home country of Russia for the title he believes he will take from Tony Ferguson:

“Conor made $100 million [to fight Floyd Mayweather in August]? Why would he come back for $10-$15 million?” Nurmagomedov said. “I think Conor needs big motivation to fight because he has money. He’s already a two-division champ.

“In the lightweight division, the most important fight is me and Tony. I have to fight with Tony. This weight division is a little bit weird right now, but I’m going to change this at the end of the year. In March or April, I’m going to fight Tony for the title.

“I think the UFC does want that fight because we can make a lot of money in pay-per-view,” Nurmagomedov said. “Of course, Russian people cannot pay $100 for a pay-per-view, but maybe the UFC can make it in Russia for $10. It’s a very big sport in Russia. If UFC makes this pay-per-view, 10 million people in Russia will buy it. The UFC has to make business in Russia. Maybe they are waiting for me to take the belt and have me fight Conor in Moscow.

“It’s a very big fight, but I came here to take the belt and make history. You can’t make history only with money. I want to win this fight and stay busy. This is my crazy dream. Others will fight so many times in a year. I can do this, too. I have to stay healthy. This is a perfect moment for me.”