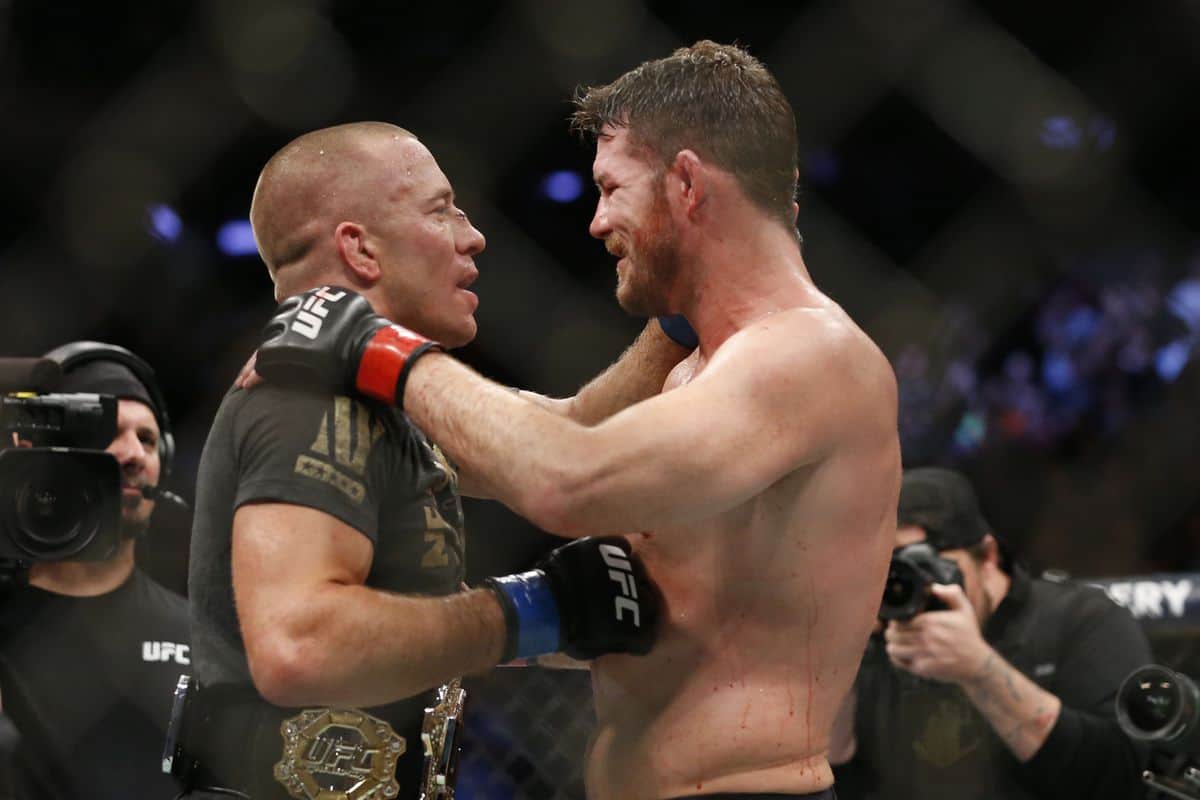 Bisping left the cage with his first loss in six fights and, more importantly, as a former champion.

The Brit had openly suggested in the past year that he may be on the cusp of retiring. Following his third round rear-naked choke loss to Georges St-Pierre on the main bill of UFC 217 in Madison Square Garden, New York, there was a mild expectation that Bisping may have announced that was all she wrote. On the contrary, the 38-year-old maintained that he wasn’t done just yet:

“I don’t need time off, I’m fine,” Bisping told those assembled at the UFC 217 post-fight press conference. “I’ve got no injuries whatsoever, I’m not hurt at all. I’ve got a couple of little scuffs on my face, but nothing hurt me. Tonight was his night. Maybe [I’ll fight] March in London [at UFC Fight Night 127], that sounds nice. We’ll see.

“But listen, I love doing what I do. I’m from a small town in the northwest of England, I never thought I’d be headlining Madison Square Garden. And I’ll be damned if the last time I do it is me getting choked out on TV. So, it wasn’t my night, but that’s the way [it goes] with professional sports. One man or one team wins, and one man or one team loses.”

Bisping, clearly pragmatic but frustrated, felt that St-Pierre was beginning to tire. The Canadian persisted, however, and managed to pull off the win:

“I felt he was slowing down,” Bisping said. “Of course, he got me down in the second round. Any time you get taken down, you want to get back up, but I was landing a lot of good elbows from underneath and I was landing some punches from underneath. But even still, even though I was busting him up, I was still conscious of the fight, that you’re losing the fight in that position. Even though I was cutting him open, I knew I was losing the fight, so I thought, ‘Right now it’s time to get back up.’

“So I felt very positive in the fight then. Of course, he got me down, but I was able to get back up in the first (round) and in the second when I chose. So yeah, maybe my confidence was my demise. Maybe, but I did feel him slowing down. I could see it on his face, certainly when he started bleeding and things like that.”

Bisping, in response to St-Pierre’s claims that he ‘felt like a true middleweight’ concurred with the new champion of the division:

“He looked like one as well,” Bisping said. “He looked huge. I said going into this, I said he’s probably the stronger man. He’s one of those types of guys. He’s a consummate professional, so yeah, he certainly felt like a middleweight when he had his arms wrapped around my neck.”

Bisping was as magnanimous in defeat as St-Pierre was in victory and attempted to look on the bright side despite being ‘crushed’:

“It feels like yesterday, I was champion of the world,” Bisping joked. “Listen, I’m happy. I’m proud of what I’ve achieved in this sport. I really am, and you can’t take that away from me. My kids are over there and they just said, ‘I thought you’d be more pissed off.’ And listen, of course I’m pissed off. I’m crushed inside. I am. But also, at the same time, I realize what’s important in life. This is what I dedicated my life to, but I do it for my children. I’m hearing we did over a million pay-per-view buys tonight from the top people, so that’s good.

“It’s a nice little consolation prize, but to answer your question, I’m happy. I’m happy with what I’ve done. Yeah, I’m crushed inside, but life goes on. Life goes on. Every time you fight, one man’s going to win and one man’s going to lose. That’s what you sign up for. You can’t cry like a little b*tch. All respect to Georges. Well done, he beat me. I felt fantastic going in there tonight. I truly thought I was going to smoke him, and I didn’t, so well done.”