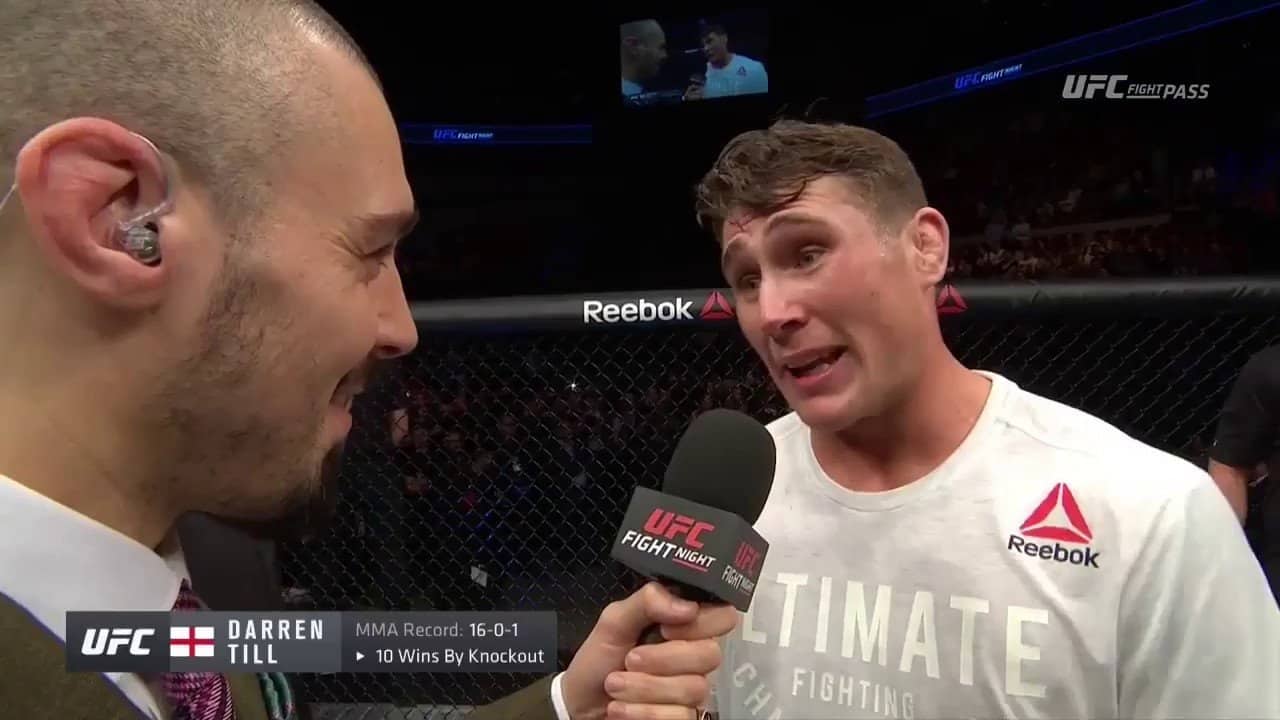 To say he backed it up would almost be an understatement.

Many gave Till zero chance against the tough UFC veteran Cerrone, yet the young Brit produced a jaw-dropping performance to stop “Cowboy” in the first round. Till’s first outing in the UFC against an A-Level fighter demonstrated why he is so highly rated by many in MMA.

Surprisingly, there were many who were not so quick to bestow praise on Till. UFC President Dana White had his say on matters:

“SHUT THE FUCK UP U PUSSIES!!!!!!” White wrote to Instagram. This kid just put on an unbelievable performance against a fuckin legend and BAD ASS MOTHER FUCKER IN [Donald Cerroe]. When fighters step in they win or they lose. Cowboy has been on both sides and showed total class as usual and praised [Darren Till]. U people on social media are the biggest cryin fuckin pussies I have ever seen. I love cowboy. He fought and lost tonight. It happens so SHUT THE FUCK UP!!!!!!!”

Donald Cerrone took to Instagram to congratulate the young Englishman, claiming that there were ‘no excuses’ on his part:

One hell of a job @darrentill2 safe to say you broke the fuck out my nose 👃!!! I don’t make excuses nor will I ever. You had a great game plan and executed it perfectly. I did not over look nor take you lightly. So again congratulations.

“One hell of a job @darrentill2 safe to say you broke the fuck out my nose ?!!! I don’t make excuses nor will I ever. You had a great game plan and executed it perfectly. I did not over look nor take you lightly. So again congratulations.” – Donald Cerrone via Instagram

Till’s stock has taken a massive jump following his monumental victory over Cerrone. With his eyes focused on the UFC welterweight title, Darren Till spoke after his dominating performance about who he believes is the toughest fight in the UFC:

“I think, really, the hardest person in the welterweight division is Demian Maia. I do. We’ve seen time and time again, it’s mad being in that world of the ground [with him].”

“[Grapplers like Maia]  just bring you into this crazy world of false sense of security, and when they’re ready they just strangle the life out of you. Demian does that. Demian doesn’t come in to punch or whatever. He thought he was a striker a few years ago, and now he’s gone back to what he knows, and he is, to me, I think he’s the biggest challenge for anyone. I know Colby [Covington] is fighting him now, and Colby is a relentless wrestler. But I believe that Demian is the hardest fight in the welterweight division.”

The Liverpudlian seemed to be setting his sights on progression rather than jumping up the ladder in the immediate aftermath of the bout, claiming that he was open to fighting another surging welterweight, “Platinum” Mike Perry:

“I’ve got my eye on Mike Perry,” Till stated while pointing at Perry who was sitting cage side. “You and me were meant to fight!”

While many fans point towards this bout being one to savor, Perry must first get past what will be a solid test against Santiago Ponzinibio at UFC on Fox 26 on Dec. 16 in Winnipeg. Should “Platinum” win, then a fight between two of the most promising young fighters in the UFC is on.

UFC middleweight Kelvin Gastelum took to Twitter to express his opinion that observers are ‘sleeping’ on Ponzinibio and that he would beat both Perry and Till:

Everyone is sleeping on Ponzinibio! He'd sleep both of em but no one is talking about it https://t.co/RhrUpnKjAR

“Everyone is sleeping on Ponzinibio! He’d sleep both of em but no one is talking about it.”

Gastelum not only believes that Ponzinibio will sleep Mike Perry in Winnipeg, but also predicted that Santiago would do the same to undefeated welterweight contender Darren Till in a future matchup.

Mike Perry was quick to respond to that assertion, however:

“So @KelvinGastelum stands up for @SPonzinibbioMMA because media is unfair and I was in the right place at the right time #Hater”.

Things are getting very interesting in the UFC welterweight division…