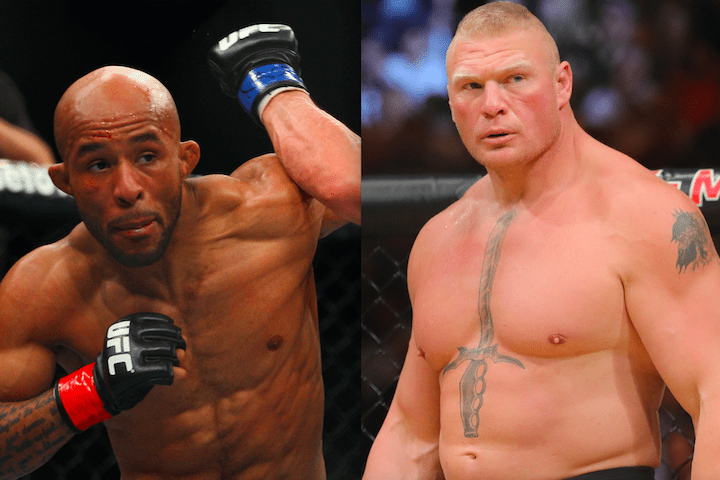 UFC flyweight champion Demetrious Johnson may be fighting former heavyweight champion Brock Lesnar at the promotion’s end of year event, according to rumors. MMAFullContact.com got the scoop from some guy sat in a bar somewhere in New York on Tuesday. It is unclear at this point whether that guy was sane and not high at the time of writing

“I’m a UFC Expert. I know people in the UFC and they told me it’s gonna be Johnson vs. Lesnar for the belt, man. What a fight that is gonna be, right? I think Johnson can take him, man, I really do. I think this is the fight to make,” the random overweight dude in a Tapout t-shirt told our reporter.

“Both of these guys are like, great, so it will be cool. I think Lesnar won’t be able to deal with Johnson’s movement, man, and that for me is why Johnson is great. Cos he moves”.

It appears incredibly illogical and a little over the top to think that the flyweight champion – who weighs in at 125 pounds – could ever be matched up against a heavyweight former champ who hulks over him at 264 pounds. The “UFC Expert” disagrees, however:

“Man, size is nothing but a number. I beat up lots of guys bigger than me, you know,” he said while sniffing some unidentified white powder. “I was like ‘boom!’ this one time when I fought this guy who looked like he ate bears for breakfast, bro. I hit him with a superman punch, and that was it. Then I got signed to the UFC but broke my neck before my first fight when I was training with ninjas in Korea.”

“Now I just fight for fun, bro. So don’t judge a book by its color,” he added while swigging a beer.

The UFC did respond to our efforts to contact them, however. When we asked if the fight was in the works, we received a “lol” followed by a “thank you for the laughs”.

The “UFC Expert” was last seen wandering around the Upper East Side in Manhattan, screaming something along the lines of “James Brown stole my underwear”.