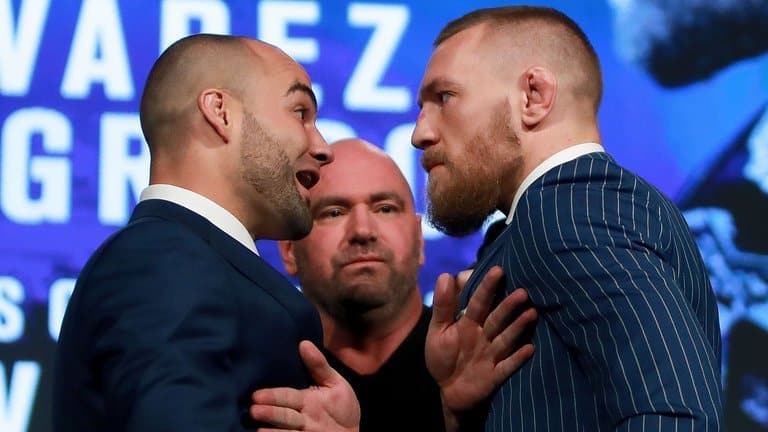 Those doubting the chances of Conor McGregor in his upcoming boxing bout with Floyd Mayweather Jr. may need to refresh their perspective

That is according to former UFC lightweight champion and the last man to fight (and lose) to McGregor inside the octagon, Eddie Alvarez.

Alvarez was, like many observers, watching the recent “Mayweather vs. McGregor” world tour with a keen sense of expectation. The Irishman is known for his theatrics and ability to sell a fight, and Alvarez believes that the UFC ‘need guys’ like the Dubliner:

“I was sitting back with some popcorn, really enjoying this tour they went through,” Alvarez told ESPN’s 5ive Rounds podcast recently. “The most comical thing for me, even when I watch movies, is the guy who’s so crazy confident about himself, like with the mink jacket. To me, that is so funny. I wish I could be like that. As a fighter, I wish I could do that, so I could make people laugh. But I can’t. It’s not my style. I’m glad he does it because we need that. We need guys like that.”

While the general consensus is with a relatively easy night for Mayweather on Aug. 26 in Las Vegas, Alvarez was keen to point out that as long as McGregor is in the ring, there is a great chance that he can pull off the unexpected. The Philadelphia native knows only too well of the dangers writing off Conor McGregor can bring:

“Conor has about three or four rounds to get this done. . . Within those four rounds, if you don’t think Conor can knock this guy out, you’re an idiot or you just don’t know fighting because it can very well happen. If he doesn’t get it done by then, then it could look very one-sided. The technical boxing of Floyd Mayweather is enough to make it look really one-sided for him. But Conor, there is a very real chance that he can put him away.”