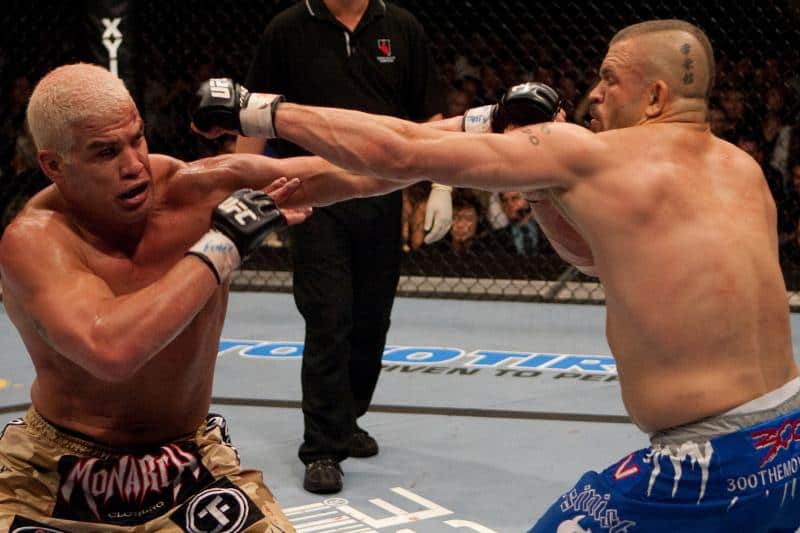 Former UFC light heavyweight champion Chuck Liddell should be eating peanuts and singing along to the radio in his rocking chair. Instead, “The Ice Man” is expected to dig up a very, very, very old grudge against another old-timer, Tito Ortiz, for pride and honor

A fighter regarded as one of the most feared of his era (a long, long time ago), Liddell is set to overturn an eight-year period of absence to return to the cage.

A one-time UFC light heavyweight champion known for his all-action, raw brutality inside the Octagon, Lidell retired following 5 losses in 6 fights in 2010. His last three bouts saw the UFC legend being brutality knocked out/TKO’d by Rashad Evans, Mauricio “Shogun” Rua, and Rich Franklin. Fans knew that – despite the glory days the Californian once enjoyed – his days were numbered in the sport.

So, the question is: why the hell is Liddell willing to risk his health at his age for the sake of a fight? The answer is simple: pride and glory, and getting Tito Ortiz back for calling him an asshole, obviously.

At 48-years old, Liddell is hardly going to be a shadow on the man who was battered in his last three fights, never mind his glory days as one of the kings of the UFC. So why has no one close to “The Ice Man” spoken to him to object to this absurd plan? A source told MMAFullContact that no one is willing to ask Liddel to reconsider:

“What, ask him not to fight? Are you f**kin’ serious, man? He’s Chuck Liddel. I don’t want to get my ass kicked, or run the risk of him having some Randy Couture flashback. I value my teeth, bro. You see these teeth [our source opened his lips] man? I like my teeth. No one wants to convince Chuck not to fight cos – if he ain’t doing it for the money, I mean the pride… yeah, the pride and shit – he’s just gonna whale on anybody.”