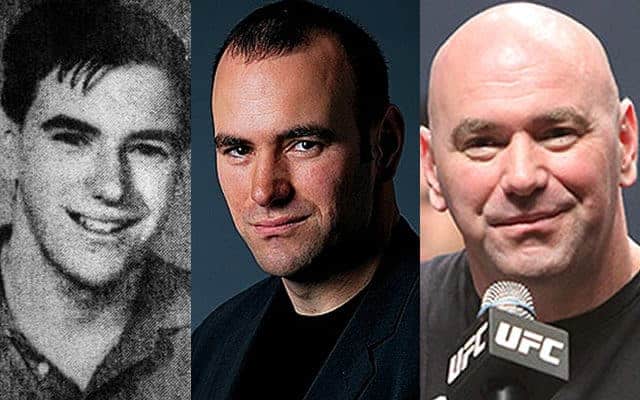 UFC President Dana White has been a polarizing figure in the world of mixed martial arts. However, not many know that White has been hiding a huge secret for over three decades. The incredible revelations below were uncovered by our reporters over the course of six months, and look set to shock the world’s largest MMA promotion to the core

Who is Dana White?

White was born Seamus O’Flaherty in Howindafeckdyaexpectmetopronouncethis, Ireland on 6 October 1935. This makes him 83-years-old, which is incredible given his much younger appearance. O’Flaherty was the son of a legendary Irish bareknuckle fighter named “Fierce” Finn O’Flaherty, who fought over 20,000 fights in the 1800’s until his hands fell off.

Unable to fight the hundreds of bouts he would engage in every single day – O’Flaherty turned to his son, Seamus, to provide for his parents and 49 siblings who lived in a one-bedroom shack on top of a tree. O’Flaherty [now White] took up menial jobs, which included:

Clearly unable to find success – or make any decent money – O’Flaherty told his parents of his dream to follow in his father’s footsteps as a fighter. Both “Fierce” Finn and Finnesse [his mother] initially expressed concern, due to their son’s inexperience as a fighter. Eventually, with no other option to make money, they relented.

White’s Life as a Fighter

Seamus adopted the fight name “Sexy,” but was arrested by local policemen for indecency, and forced to change his name following an exorcism by his parish priest. It took 65 nuns to hold White down, and cast out the evilness inside of him which led to him choosing such an ungodly name. The exorcism lasted 2 years, which was a great burden to his family. His father was forced to fight again in his son’s absence – but with no hands, had to resort to knocking men out with his shoulders (in a sport called shoulder boxing, which paid nothing but chicken feed) – which made White very guilty. With little to no food, White’s father’s frame was so slight that nobody could see him, but only hear him.

White left the church convent a new man, told by priests that he was now ‘pure’. Intent on making a new life for himself – and finding a new name – he walked towards his treetop home with his head held high. A local man with a speech impediment greeted the young buck with the popular village phrase ‘stay in the light,’ which sounded like ‘Dana White’ to O’Flaherty. As he walked past the 7,500 bars on the small street he called home, the 18-year-old decided to be now known as Dana White.

A new man with a new plan

White greeted his parents with a short but sweet proclamation: “I am now Dana White, and I will one day be a fight promoter.” His parents laughed in his face, although he could only see his mother due to his father’s extremely thin frame. He decided to show his parents what he could do and called two of his sisters into the yard. “Breda. Brenda called you an arsehole. Brenda. Breda said you look like a transgender leprechaun in  a burn’s ward.” Both sisters squared up to one another before White declared: “This fight will be for the interim championship of this house.”

The entire village packed out the small patch of land owned by the O’Flaherty’s, with White taking the 1950’s equivalent of $25.99 from every one of the 12 villagers and his family. The fight was a success, and everyone rejoiced.

White figured that he would have to leave his small village in 1950’s Ireland to achieve his dreams of becoming a world-famous promoter, and waved goodbye to his family and friends in Ireland. A boat sailing to the USA from Italy picked him up, and with tears in his eyes, White knew that it would probably be the last time he saw his beloved Howindafeckdyaexpectmetopronouncethis.

While weeping in the middle of the Atlantic Ocean, White was approached by two Italian brothers named the Fertitas, who offered him cannoli to eat. White, clearly moved and now holding back his tears, explained why he was heading to the States. The brothers – who had made millions in Italy off the back of their incredible gift for selling overpriced lemons – were so impressed that they agreed to fund White’s dream.

Having spent almost 40 years together on the boat, it finally arrived in New York. White and the Fertitta Brothers would purchase and find success in what we know now as the UFC.

From the son of a father with no hands to arrests, exorcisms, and promoting interim-championship fights between his sisters, White became a multi-millionaire, and one of the most important men the sport of mixed martial arts will ever have. At 83-years-old, White is still going strong.