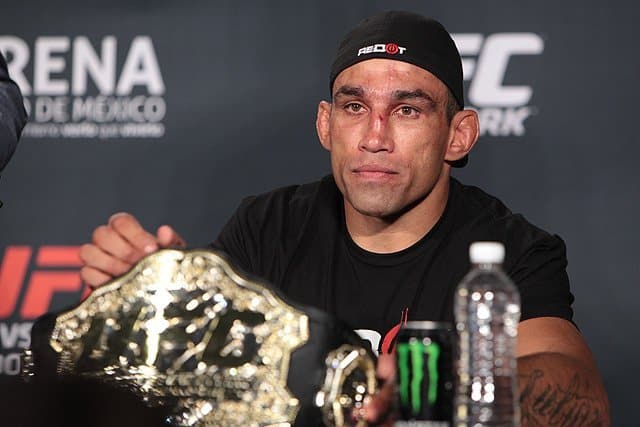 A fight almost no one could have predicted came close to happening at a UFC 216 media lunch: former UFC heavyweight champ Fabricio Werdum and lightweight contender Tony Ferguson

Despite Werdum weighing a whopping 238 pounds in comparison to Ferguson’s 155, both men had to be separated in order to avoid a confrontation.

Ferguson’s gripe with Werdum was a result of the Brazilian speaking while “El Cucuy” was discussing his fight with the media. Werdum wasn’t happy with Ferguson’s attitude towards him, taking particular offense to his suggestion for him to ‘stop talking’.

Both men traded some pretty heated words and insults in Spanish and Portuguese, before being separated by UFC PR rep Chris Costello. Werdum, who was clearly riled up by Ferguson’s perceived lack of respect, said that he was close to hitting the lightweight:

“I just don’t punch him because I know he’s got a fight coming up and Chris is a very nice guy with me all the time,” Werdum said afterward during the lunch. “I don’t want to break everything. I almost, maybe just like one second, I snap his head — 100 percent. Like PRIDE rules.”

According to Werdum, he says he has met Ferguson before and things have been generally cordial between both men. On Thursday at Hinoki & The Bird restaurant in Century City, Werdum claimed that the UFC 216 winner had “bad energy” when greeted him. Werdum was also surprised when Ferguson told him “shut your mouth” in Spanish:

Ferguson claimed that he did not likeWerdum’s manager, Ali Abdel-Aziz, and this may have something to do with Abdel-Aziz also managing one of his biggest rivals, UFC number 1 lightweight contender, Khabib Nurmagomedov. Ferguson and Abdel-Aziz have traded barbs on social media on plenty of occasions and even claimed that he Werdum’s ‘rudeness’ led to him shooting him down:

“I don’t want to be around people that bring me down,” Ferguson said. “This is my shit, man. This is my f*cking time. Don’t talk over me. Because when you were in that spot, I gave you the time and the energy for it. I let you be. Don’t be rude. It’s just rude, man.”

Ferguson meets Kevin Lee in the main event of UFC 216 for the interim lightweight title on Oct. 7 in Las Vegas. Werdum, meanwhile, faces Derrick Lewis on the undercard of October’s UFC event. While he will certainly be facing a man more equal to his size in Lewis next week, things could have gotten out of hand with Ferguson:

“I just finished my training now, I’m very relaxed,” Werdum said. “I just come to the interview for you guys. My blood go [up] more in the fight. When I’m in the fight, my blood up like very hot. But this time? I don’t believe it, man.”

With Nurmagomedov out of the picture for the time being, Ferguson now has a chance to place himself into the number 1 contender slot. UFC lightweight champion Conor McGregor currently sits atop of the division and “El Cucuy” would like to think that he would have first dibs at the Irishman with a win. The nine-fight streaking lightweight knows that, with the UFC, things aren’t always so easy:

“The next fight for Conor should be whoever wins this interim lightweight title,” Ferguson said on Thursday via a UFC 216 media conference call. “Regardless of winning or losing this, myself or if it’s Kevin Lee, that b*tch (McGregor) needs to defend or vacate and he needs to unify that belt. Anything else, with as far as him trying to fight Nate and everything else, that’s the bullsh*t rankings and everything else that the UFC stands for just [going] out the window, man.”

“This has been my division before McNuggets even stepped into this b*tch,” Ferguson said. “Even when I was at Paradigm Sports Management, he signed up at 145 pounds. The agreement was he wasn’t going to come up to 155 pounds, but that raised a conflict of interest and I’m pissed, so that b*tch needs to fight me or he needs to fight the guy that’s holding the belt.

“I mean, really? You have rankings for a reason,” Ferguson added. “You have an interim belt for a reason — so you can unify the thing. The guy (Diaz) is what, a top-10 (lightweight)? Not even a top-five? Kevin Lee’s got more heart than Nate, and I have more heart than this whole entire division. So if they want to put that fight together, then that’s great, but you know the fans will be pissed, because obviously they know that f*cking Diaz and Conor is going to make a lot of money, but the real righteous thing to do is to make sure the belts become unified. That’s what really needs to happen.”