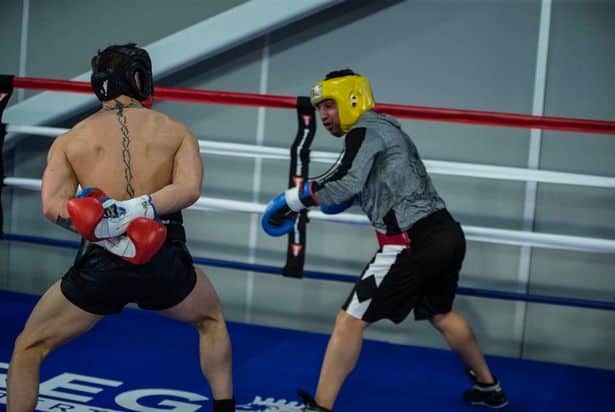 Conor McGregor made a glamorous and lucrative foray into boxing in August against Floyd Mayweather Jr., but he is not the only fighter in the promotion with a pro boxing record

In fact, many may be surprised to learn that some of the biggest names in the UFC have experience inside the squared circle.

In this piece, we take a look at five men who either started off inside the boxing ring or ventured into the sport while simultaneously enjoying a professional mixed martial arts career.

Holm was considered one of the best female boxers on the planet prior to making her way into the world of MMA. “The Preacher’s Daughter” is the first fighter to win championships in both MMA and boxing in a professional capacity.

Holm’s talents led her to multiple world championships in boxing, amassing an impressive 18 title defenses in three weight classes. Holm was named Ring magazine fighter of the year in 2005 and 2006.

The 35-year-old is best known for her knockout of former dominant champion Ronda Rousey in 2015, arguably ending Rousey’s career somewhat in the process.

Donegal’s Joe Duffy is best known for being the last man to defeat Conor McGregor in MMA prior to Nate Diaz’s win over the Dubliner at UFC 196 in 2016. Duffy moved into boxing following his first loss in pro boxing, eventually signing with the UFC in Jan. 2015.

Prior to this, however, Duffy’s pro-boxing debut was in March 2013. The Irishman would amass a 7-0 record at super-middleweight, finishing 5 of the 7 bouts. Seemingly unhappy with his level of opposition, Duffy would venture back into MMA via the Cage Warriors promotion before catching the eye of the world’s foremost MMA promotion where he is 4-1 in total, losing only to featherweight and lightweight stalwart, Dustin Poirier.

Vitor Belfort is widely regarded as one of the pioneers of modern MMA having begun his UFC career in 1997. While Belfort is set to “retire” from the promotion, there is speculation that he is not yet done with fighting.

Surprising to some, Belfort has a pro boxing record (albeit, 1 fight). It was in boxing where the Brazilian legend would first find his taste for combat, having taken up the sport at the age of 12 before training in BJJ.

Belfort had his first (and last) fight under the Queensberry Rules against Josemario Neves in 2016, knocking his compatriot out inside the first round.

A bonafide UFC legend, “Cowboy” lost his only pro boxing bout by way of a 2nd round TKO to Geoffrey Spruiell in Colorado back in 2003.

While the 34-year-old earned a legion of fans due to his all-action performances and no-nonsense attitude, it was clear that Cerrone harbored no interest in pursuing a career in boxing.

Cerrone’s kickboxing and Muay Thai records are far more impressive than that of his pro boxing one, having beaten all of his 28 opponents with 18 KOs. Cerrone, thankfully, decided to dedicate himself to MMA and currently fights in the welterweight division of the UFC.

In a strange coincidence, fellow UFC welterweight Carlos Condit was initially set to meet Cerrone in his boxing debut…

Diaz won his first and only boxing bout against Alfonso Rocha via unanimous decision in 2005 while he was still under contract with the UFC.

In MMA, Diaz is known for his aggressive, high pressure-style fighting where he throws a high volume of punches in an effort to wear his opponent down. With a granite chin and a good understanding of footwork and angles, Diaz may very well have had a successful career in boxing had he exclusively applied himself to the sport.

MMA legend Anderson Silva made his pro boxing debut in 1998 but was stopped, which seemingly put rest to his ambitions inside the ring. Seven years later and that itch returned.

Silva made his second foray into boxing in 2005, beating Julio Cesar De Jesus via KO in the 2nd round. “The Spider” has never shied away from the fact that he still holds ambitions in the sport and has campaigned for a bout with boxing all time great Roy Jones Jr. as recently as earlier this year.