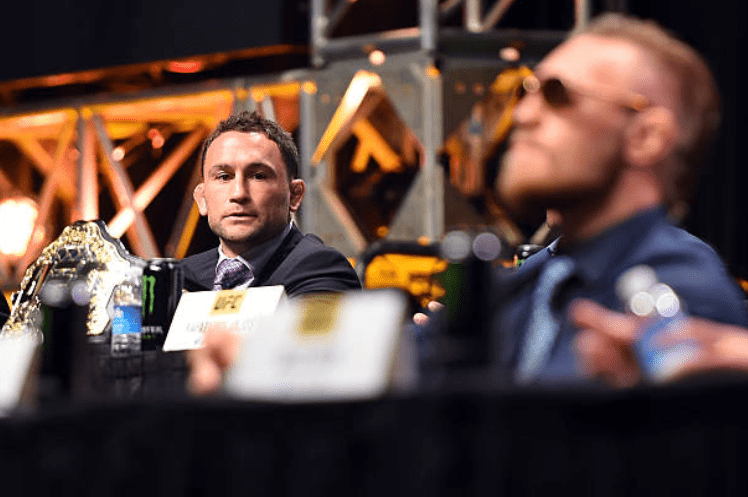 When Conor McGregor claimed that he offered to fight Frankie Edgar following Max Holloway’s withdrawal from their featherweight title clash Edgar’s camp were less than enthused. Edgar’s manager and trainer both lashed out at “The Notorious” in their own ways, criticizing the Irishman for what they believed was a distasteful publicity stunt

Abdelaziz, who manages Edgar, Khabib Nurmagomedov, and Fabricio Werdum, referred to McGregor as a ‘prostitute’ and a ‘liar’ last week and expanded on that in a recent interview with TMZ Sports:

Abdelaziz said Edgar would ‘beat the sh-t’ out of McGregor and the whole of Ireland if ‘The Answer’ beats Ortega at UFC 222 in March:

“Let me talk to you about Conor McGregor. He’s like a prostitute that used to make high dollar money, but who got old and nobody wanted anymore. You understand?” Abdelaziz told TMZ Sports, per BJPenn.com’s Justin Golightly. This is what he is. This f-cking guy, for three years he did everything he can not to fight Frankie Edgar. He was supposed to fight Frankie Edgar and he chose Chad Mendes coming off a loss, camping, over Frankie. He had so much opportunity, now he wants to f-cking fight Frankie? It’s funny, because as soon as Max [Holloway] got hurt, coach Mark Henry told me to reach out to the UFC and ask if Conor could step in. I did call the UFC, they said, ‘Dude, we can’t even get him to fight in his own weight class, he’s not gonna f-cking fight Frankie.’

“Listen, [McGregor]’s so f-cking afraid of anything starts with the letter ‘F’. That’s Frankie. You know, the whole thing is, he copied everything Floyd Mayweather does. He’s older, he wants to be relevant and he wants to create news. You guys called me. Why you guys call me? Because Conor Mcf-cking McNuggets, like f-cking Tony Ferguson says, he’s f-cking making news.

“He ducked Frankie Edgar for three years. He could’ve fought Frankie so many times, but he didn’t. Now he want to fight Frankie? Guess what, like I said, let’s handle [Brian] Ortega and after Ortega, we can fight him in June. They need a main event for June, we’ll fight him in June, but he’s scared. I don’t care if Frankie 50-years old. Frankie could be 50-years old and beat the sh-t out of him. Him and the entire nation of Ireland.”

Big claims from Edgar’s manager. It appears that Edgar is also more than up for a bout with his former featherweight counterpart. McGregor will not move down to featherweight, so a potential fight would have to be at 155-pounds, at least.

McGregor famously worked his way through many names of the 145-pound division on his way to claiming his first title in the UFC. One of the fighters “The Notorious” did not get to fight was Edgar, who was considered one of the best talents at featherweight at the time, as he still is now. McGregor earned a title shot with wins over Max Holloway, Diego Brandao, Dustin Poirier, Dennis Siver, and Chad Mendes prior to knocking dominant champion Jose Aldo out in just 13-seconds to win the crown.

MMAFighting’s Dave Meltzer recently revealed information which would make any fight with Frankie Edgar a possibility, but unlikely. Talks between McGregor and the UFC are currently ‘going well,’ but nothing has been finalized just yet:

“The word is that negotiations with Conor McGregor are going well,” he wrote in his newsletter.“No deal to return has been inked but they are said to be not so far apart and are in talks about him doing two fights in 2018. All the pub right now is Mayweather under MMA rules but I can’t see Mayweather agreeing to that, even though it’s huge money. The UFC fight idea is the winner of Tony Ferguson vs. Khabib Nurmagomedov.”

McGregor recently took to social media to confirm that he is on his way back to competition. Without clearly stating that he would be fighting under the UFC’s banner, the Irishman did indicate that he was planning on coming back to the fight game in order to prove that he is ‘the best’:

“I am fighting again. Period,” McGregor wrote to Instagram. “I am the best at this.