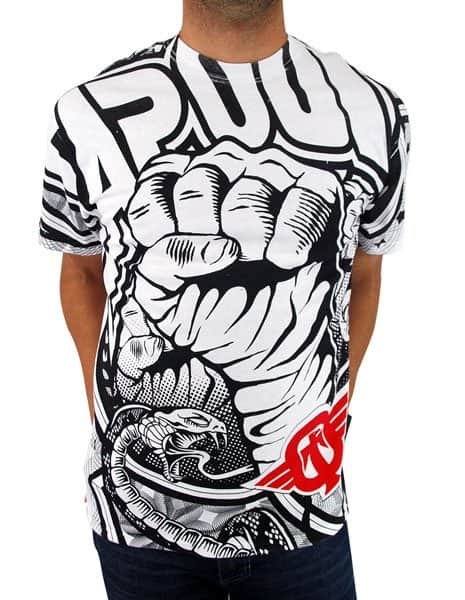 When it comes to martial arts, some are more effective than others in combat situations. While the beauty and tradition of certain disciplines are close to the heart of many, in a real-life situation, they don’t tend to offer practitioners the same level of protection as others. When we consider putting the best of the traditional arts together, we arrive at mixed martial arts (MMA)

Mix boxing, Muay Thai, BJJ, wrestling, judo, and a few other disciplines together and that is where we are – there or there about – with MMA. Hours and hours of training, discipline, diet and studying goes into perfecting a style to challenge some of the toughest and most effective fighters on earth. According to Jay from Ohio, this is simply a waste of time:

“I see these MMA fighters and I see a waste of time, and effort,” he said while stopping to inhale from his asthma pump. “You see, I used to get my ass kicked all of the time, you know? I watched Steven Seagal movies and thought that I could just, like, do what he did and I would be a killing machine. It didn’t exactly work out that way.

“One day, my buddy Julian – who also couldn’t really fight – called me over to his house. We had been speaking the day before about learning how to fight, and he was so excited afterward. When I called over to his house the next day, I couldn’t believe what he was telling me. ‘Jay,’ he said. ‘I am now a killing machine.’ I was like ‘whoa, man I need to sit down’. He said ‘grab a soda and a donut for me before you do, man’ and I didn’t not want to do that, as he probably would have killed me”.

Jay claims that his friend told him that, while he left his house early in the morning that day as a frail, weak, and overweight 20-something, he returned as one of the most deadly fighters known to man.

“Two words,” he said. “Krav Maga. I was like ‘Crap Mawho?’ “Krav Maga, dude”. He explained that it was a secret martial art created by Jesus and these like mind-reading Jewish ninjas in the 1700’s or something. If I wanted in, he could get me in, but if I didn’t turn up I’d be assassinated. I had to go”.

Jay – who’s surname we cannot publish due to his wishes – then opened up on what he learned at his first Krav Maga class. Unsurprisingly, the 34-year-old fast-food worker was reluctant to let us know the full extent of the secrets he earned while at the $20 class in the gym of his local high-school:

“It’s kinda like Fight Club, in the sense that you can only usually get in if you’re like Brad Pitt or something,” he said, while slurping his super-size cola. “I got in through my buddy, and the fact that the coach told me after I paid him that I had like, the dragon spirit and the eyes of a lion and heart of the tiger.”

“I asked ‘is this gonna be like MMA, cos, you know, I don’t want to be rolling around, getting sweaty, or getting punched in the face’. The instructor was like ‘no, man, this is like a secret martial art that will give you powers without having to even work out or do anything to make you perspire.’ I was like ‘whoa, this is the martial art for me’

20 minutes later, Jay had learned everything he needed to learn in order to become a ‘killing machine,’ as he puts it:

“Man, I hear of like boxers training for hours 5 days per week, BJJ guys waiting 20 years for a black belt, and I just think these assholes are precious. I learned this magic in 20 minutes, bro, and then went and tried it out in the burger joint. I threw my keys at this guy’s head and then like gave him the stuttering monkey punch. He just looked at me like I was crazy, but I could see that he had like, superhuman strength, especially when he rolled out of there in his wheelchair.”

As for how effective the Krav Maga class he kind of took for 20 minutes is in a real-life situation, Jay believes that he can take on the entire UFC roster and win… if he wants to:

“Dude, the UFC fighters are frauds. I could train UFC if I want, but I don’t want to cos I have my powers. I would kill them all, anyway, cos you can’t take my skills into combat cos they are, like, really too much and too dangerous.”