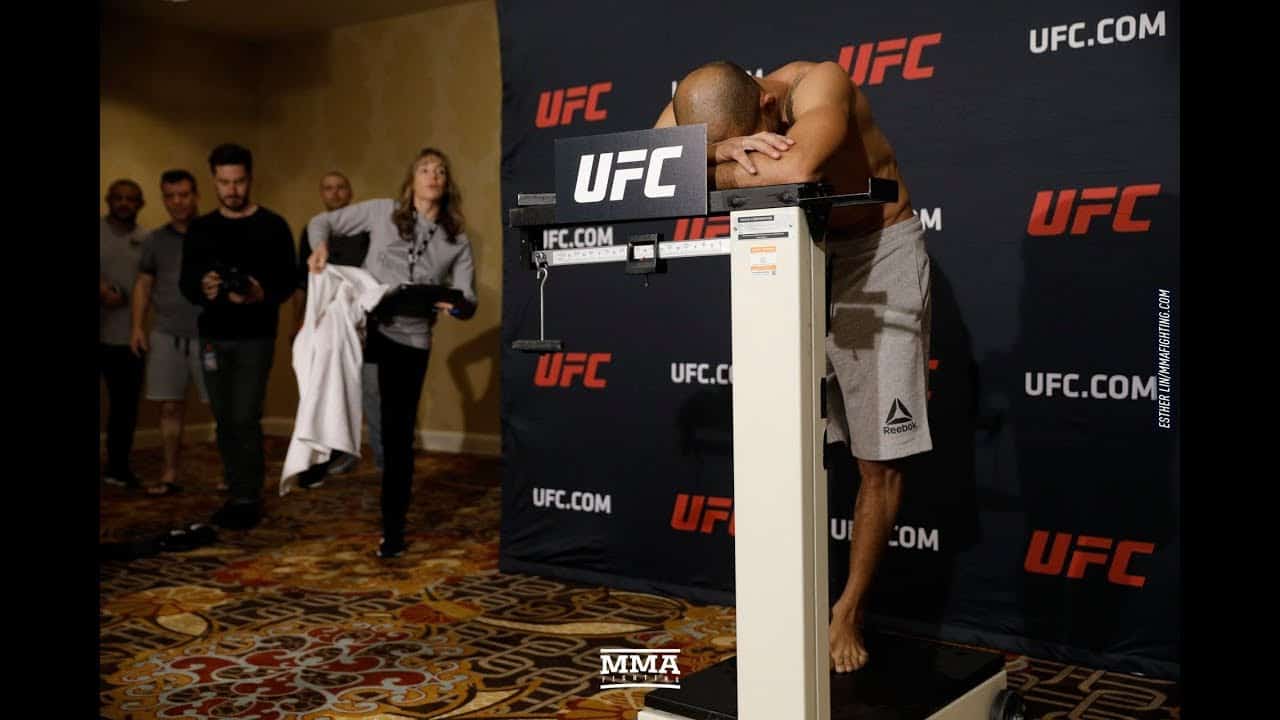 The Brazilian legend got the nod to face Holloway in what will be the second time in less than six months Frankie Edgar withdrew from the initial title fight with an injury.

“Scarface” lost his 145-pound title to the incumbent champ at UFC 212 in June, having beaten Edgar in a UFC interim featherweight bout at UFC 200 in 2016. That title was later upgraded to the championship belt proper when Conor McGregor was stripped of the belt in early 2017.

Aldo jumped at the opportunity to fight for a third featherweight title, which would make him the only three-time champion in the history of the division. It can be argued that the 31-year-old may have had difficulty in making weight due to not having a full camp leading up to the fight. With just 36 hours his rematch with Holloway, Aldo hit the scales:

Aldo’s reaction at hearing that he missed the 145lbs threshold by one pound (146lbs) was exactly what you would expect from him, given that he would have had the opportunity to gain the title with a win.

Luckily for Aldo, his trainers came to the rescue with a towel and he removed his shorts which allowed him to hit the scale at 145 pounds.

Aldo had been speaking of his new-found focus ahead of the bout, which would have been unfortunate should he have failed to make weight:

“I found my will to fight again, and now I’m back. You can be sure I’m going to give my best from start to end. They’ll have to pull me out dead from there. Dead, but with the belt,” he told Combate.

Aldo looked to be afforded a brand new lease of life with the absence of Conor McGregor from the featherweight division. Although a rematch with “The Notorious” would have afforded the Brazilian an opportunity to avenge his 13-second loss at UFC 194, the Dubliner clearly affected “Junior” and his focus.

Although Holloway took the title from Aldo in his first defense of his title in his second reign as champion, the Brazilian recently ‘thanked God’ that McGregor was no longer ‘holding the division hostage’:

“Thank God my division is moving. It would be bad if it was stuck, but my division is moving,” Aldo said. “It’s hard, right? Every athlete dreams of becoming champion, fighting for the title, and the guy [McGregor] is holding up the division. But it’s up to the UFC to make the decisions.

“The UFC needs to do what has to be done: you take the belt away or make him defend it. I think everyone is waiting for that.”

Aldo also expressed sympathy towards interim-lightweight champion Tony Ferguson, who he believes is in somewhat of a similar position to himself while McGregor reigned over the 145-pound division:

“Yes, this time is coming,” Aldo said, “He has to defend it, has to put his belt on the line in order to become champion. He only won the title. For me, Ferguson has great possibilities of becoming champion in the future.”

His opponent on Saturday night, Max Holloway, will not be taking Aldo lightly. “Blessed” told MMAjunkie that he believes that he lost the first round of their encounter in June:

“The first round, for sure (I lost),” Holloway said in advance of his rematch with Aldo (in the headliner of Saturday’s UFC 218, which takes place at Little Caesars Arena in Detroit. “The second round, I really don’t know. I was watching ‘The Countdown,’ and ‘The Countdown’ said I was down, and that’s some (expletive) unless they saw the cards.”

Holloway also had a message for Aldo, claiming that he would not be facing the same fighter he fought earlier this year:

“He’s looking at the fight thinking how he can beat me, and I watch the fight not only for myself, but to watch myself, to see what he thinks he can do,” Holloway said.

“That’s why every fight, you see a new me, a best me. From fight to fight, I always try to see what guys think they can beat me in, and then when I go in there, and they figure out they can’t do what they thought they would be able to do, they’re sinking quick in quicksand. I always do my homework, and it shows out there.”