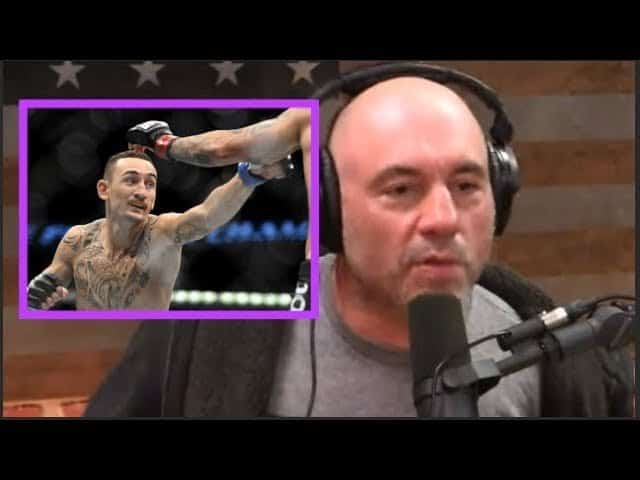 Having beaten Jose Aldo for the second time in six months, Rogan believes the Hawaiian has overtaken the Brazilian legend at the top of the list of the greatest featherweight fighters in MMA history.

“Max Holloway’s performance was nothing short of masterful,” Rogan said (transcribed by Jed Meshew for MMA Fighting). “Nothing short of masterful, the way he handled Aldo. He yelled at me after he got done with the first round, he looks at me and he goes, ‘The man is tired! The man is tired!’ He’s a motherf**ker. Max Holloway is a real f**king warrior, to the core. That guy relishes it, he loves it.

“When he was chicken-necking it at Aldo and he’s got his hands down and is talking s**t and stalking him, you could see it in Aldo’s face, like he was drowning. You could see the waves were coming and he knew he wasn’t gonna be able to dog-paddle for too long. Like, ‘Jesus Christ, how am I gonna be able to keep up with this guy?’

“He’s the baddest motherf**ker. I think he’s the best 145er ever. He might not agree with it yet because of the record, which I see his point, but the way he fights, the octagon I.Q. that he shows, his fight I.Q., his ability to find a weakness and see it, his predatory behavior inside the octagon, I think he’s the best. I really do. It’s so impressive to me.”

Aside from his remarkable talents inside the octagon, Holloway’s demeanor and general behavior are in stark contrast to the flashy, trash-talking exhibitionism which seems so common among the UFC roster today. Holloway, as evidenced by his unassuming and faithful moniker “Blessed” has put fighting and a lasting legacy ahead of fame and riches, which is refreshing in the age of the ‘money fight’:

“The only thing that’s going to stop me is medically, or I can’t make the weight,” Holloway told Rolling Stone post-fight. “I’m not going to force my body to do something it doesn’t want to. I’ll go up to 155 [eventually]. I want to go for four titles – 155, 170, 185. I might even be at heavyweight one day. You guys know our eating habits are bad in Hawaii. One day, I might make history.”

“I’ve got to catch up,” Holloway says. “Numbers don’t lie. Women lie, men lie, but numbers don’t lie. I’ve only got one defense. I’ve got a bunch of catching up to do. He’s still the GOAT, I still respect him, but I’m coming for that record.”

Holloway has just turned 26 and has more than likely yet to hit his peak. The Hawaiian’s 12-fight unbeaten run is not far off the record set by Anderson Silva at 16 and it is possible that the featherweight champion could even surpass that impressive feat. You have to look all the way back to 2013 for Holloway’s last loss, which was at the hands of the most commercially famous featherweight of all time, Conor McGregor.

Following Holloway’s successful defense of his first title against Aldo last weekend, there was speculation that the champ would seek a bout with “The Notorious”. In fact, McGregor and “Blessed” even had a little bit of back and forth on social media following the bout.

I miss those sunglasses. pic.twitter.com/0fa7U9dM4Y

Miss the sunglasses? I bet you also miss 2015 brother. Retired fighters love the past. pic.twitter.com/UWGnJG2KEe

“Supposedly only he got better from the last fight and I didn’t,” Holloway recently told FloCombat. “It’s funny. Just know, if the fight with Conor McGregor never happens — like never, ever — it’s not going to be because of my side.

“Their team said I’m one of the best of the guys in the world. Go Google it if you don’t believe me. But supposedly only one guy can get better after every fight and I guess I’m not that guy. I don’t care. It’s all fun and games until the guy gets salty. He’s getting salty. He’s acting out. He’s been acting out of character lately. We’ll see where it goes.”

Holloway also claimed that, if McGregor wanted a rematch, he could have it:

“If he wants to come back, he’s more than welcome, but at the end of the day, I’ve got a belt to defend. I’m not going to go on a hiatus from my throne. I’m here to fight. I’m here to conquer. All these guys can get it.”