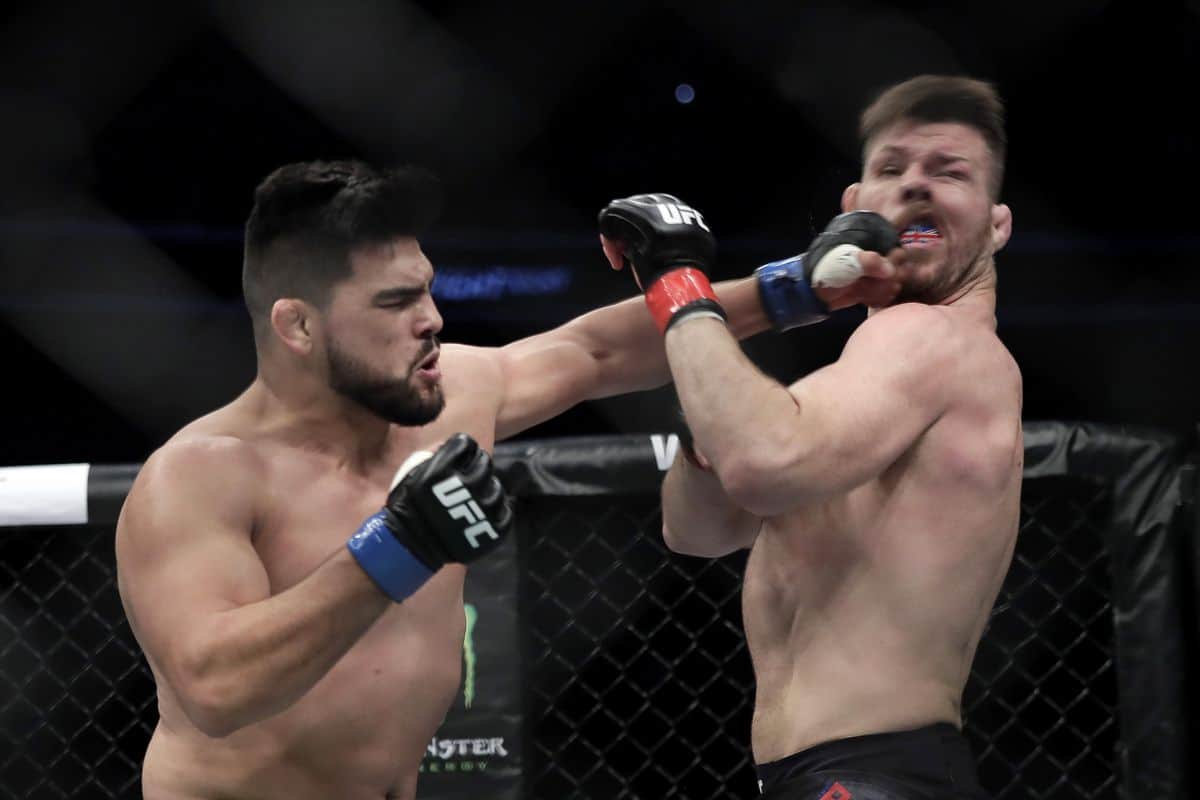 With just a three week turnaround from suffering a loss by way of third-round rear naked choke against Georges St-Pierre, Bisping was knocked out cold in Shanghai on Saturday

When Anderson Silva was popped by USADA and ultimately removed from the UFC’s first event in mainland China, Kelvin Gastelum was without an opponent.

Michael Bisping, who had stated his intentions to fight ‘as soon as possible’ was drafted in, much to the admiration of many who praised his warrior spirit. There were others, however, who questioned whether the 38-year-old was amply prepared to step into the Octagon against Gastelum given his lack of preparation and little recovery time.

Despite the scrutiny, Bisping made the show but suffered a brutal first-round knockout at the hands of one of the middleweight division’s slickest strikers. Although Gastelum was labeled an overblown welterweight by some, he delivered a very promising performance which should see him rewarded by a swift push up the rankings of the division. For Bisping, he may have gained a paycheck and a lot of respect in addition to the less desirable 0-2 record in his last two bouts…in three weeks.

No stranger to setting records in the promotion. Bisping became the very first British UFC champion he dethroned Luke Rockhold at UFC 199 in 2016. “The Count” also holds the record for most fights in the promotion’s history at 28 and shares the top spot on the list of most wins in the UFC at 20 UFC 217 opponent Georges St-Pierre. It is the latest record that Bisping will least enjoy, however: the most knockdowns in UFC history.

Bisping tops that list with a total of 12 knockdowns, having been put on his back four times in his last three fights. It is a worrying statistic and one which may add weight to the argument of those who believed that he was not ready to jump into another fight on such short notice. Below Bisping is Dan Henderson on 11, with Keith Jardine and Travis Browne following with 10 and 9, respectively.

The former UFC middleweight champion was magnanimous in defeat and refused any notion that he was ready to retire in the immediate aftermath of his bout against Gastelum:

“I just wanna say congratulations to Kelvin Gastelum. Job well done tonight. Thank you all for being here, I hope you all enjoyed it. I was enjoying myself; he caught me with a good shot. God bless Kelvin – he’s young. I’ve done this for a long time, man. I’m getting old. Kelvin’s a great guy, but unfortunately it’s gonna take a bigger pile of sh*t than him to get rid of me.”

It is safe to say that the criticism of the promotion’s decision to approve Bisping for the Gastelum bout really hit home with many following the nature of his loss. UFC color commentator Joe Rogan spoke on his Joe Rogan Experience MMA Show about the fight and questioned if it was the right thing to do allowing the veteran to compete on such short notice:

“I don’t think you should be allowed to fight three weeks after you have a brutal fight like Michael Bisping did with GSP,” Rogan said. “He got rocked, he got choked unconscious, and then three weeks later he’s fighting a really dangerous up-and-coming Kelvin Gastelum? Kelvin is a beast. He’s got nasty boxing and that’s what he showed in that fight. He hit him with a beautiful straight jab and a right hand behind it. That kid is just on fire. He’s on another level right now.”

“Would he have been able to do that if he fought the Bisping who was training for Georges St-Pierre?” Rogan said. “If Bisping did not have the Georges St-Pierre fight and just went right into the Kelvin Gastelum fight, would the same result have happened? It very well could have. The way Kelvin hits, he’s fast as (expletive); his hands are beautiful.”

To critics of the way the promotion handles affairs at times, Bisping’s first-round knockout loss following a period of just three weeks removed from being ‘choked unconscious’ will be used as an example. To fight fans, many applauded Bisping’s fearless character in accepting the bout but most of us would probably have put the fighter’s safety before casting him as the gallant rescue of a failed fight card, had we known beforehand what he was stepping into it.