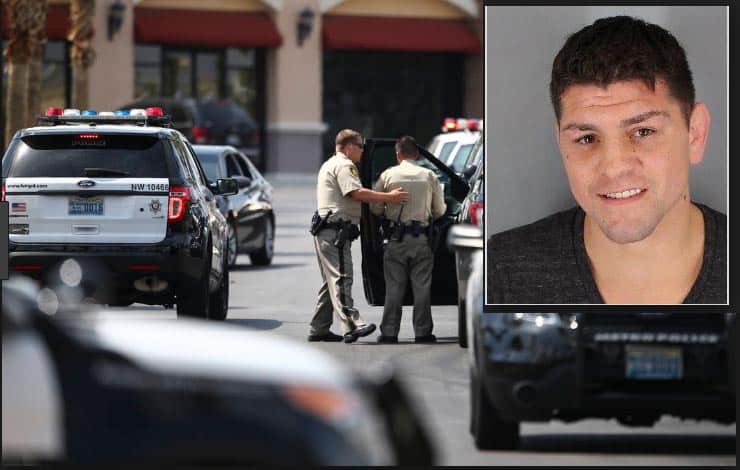 Nick Diaz has been judged to be guilty of all charges in a Facebook court following his arrest over an alleged domestic assault charge earlier this week. Diaz, who has never been arrested in relation to assault on a female prior to this incident, will be sentenced later this week

Diaz is alleged to have wounded a female associate in an attack which saw the Stockton Slugger remanded in custody.

The 34-year-old, inactive UFC star was released from police custody on Saturday. Images of his charge sheet were released online following his arrest, prompting a steady number of armchair UFC fans and simpletons declaring the Californian guilty on social media. Despite having no clear evidence, and no knowledge of the circumstances which led to the MMA legend’s arrest, Diaz was labeled as everything from a “woman beater” to an “asshole”.

Lord Knuckles of the Shadow realm, also known as Vernon, is a 38-year-old unemployed fan who was one of the first to declare Diaz guilty. We spoke to Lord Knuckles – who claims to be a black belt in BJJ, boxing, and Lacrosse – from his “lair” in his parents’ basement in Ohio on Saturday night.

“Two words: guilty,” said Vernon, who told us his 340-pound frame made him a ‘killer’ on the mats. “Nick is obviously guilty and I told everyone that he was. Who needs evidence? Who needs to know the story? Who even needs to know who Nick Diaz is? I saw the headline that he had been arrested and I just, like, felt that he was guilty in the pit of my stomach.

“Then I went on Facebook and Reddit to tell the world that he was in the wrong. I mean, that’s like my right. I have the right to expose people like Nick Diaz for being guilty. He also beat my favorite fighter, Conor McGregor, by like neck lock while he was on steroids and shit so I never really recovered from that. Now he’s taking heroin and beating up his wife. Man, guilt, guilty, guil-tee!”

When we pointed out to Vernon that it was Nate Diaz who beat McGregor – by a guillotine choke – and that he was never on heroin, Vernon told us to leave his parents’ basement or run the risk of ‘meeting my inner cobra you assholes’.

Following our meeting with Vernon, we then approached Gerry, who calls himself a “die-hard UFC fan.” Gerry was one of the first to judge Diaz following the news of his arrest, and we had a coffee with the self-declared ‘UFC fanboy’ to understand why he was quick to find the former Strikeforce champion guilty.

Gerry told us that he is known in his ‘circle’ as a “UFC genius” and that his large group of friends and acquaintances – which he tells us is made up of 6 people – rely on him for UFC and WWE information.

“I have a job to do, OK, which involves me knowing exactly what goes down. When it came to the Nick thing, I was like… look at it this way. I am a fan of UFC a long, long time. Like, people laugh at Conor fanboys. I hate Conor but was watching UFC way before Conor got famous. How many people do you honestly know who watched Conor beat Chad Mendes? Like, that far back.

Gerry – who was obviously embarrassed by his lack of knowledge – ran out of the diner before knocking over salt shakers and screaming ‘he’s guilty, you f**kin’ dickbrains’ and slipping outside, knocking himself out in the process. He was taken to the hospital and is recovering from a concussion at the time of writing.