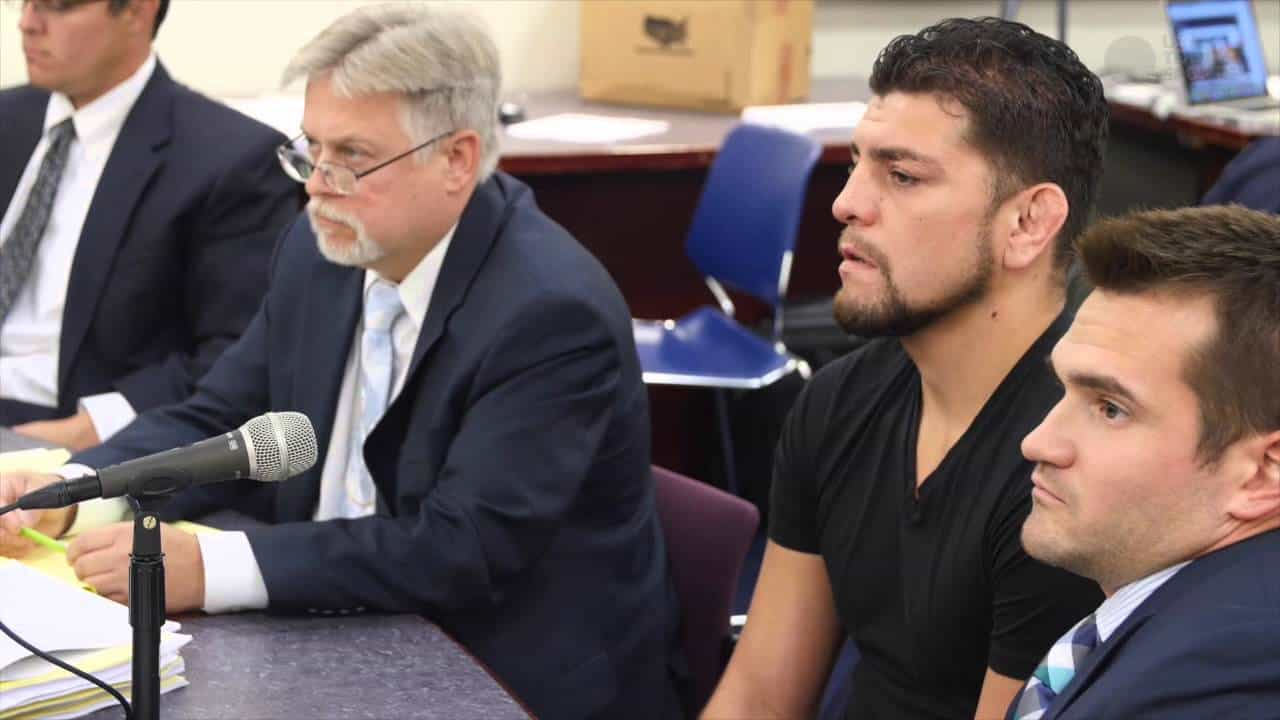 As discussed in Part 1, the fan favorite was handed down an unprecedented 5-year suspension from the sport for a positive test for marijuana. Diaz opened up after the hearing and went into detail on what the decision meant for him and his younger brother Nate:

“I had a really hot girlfriend and was very self-conscious about what I was wearing and couldn’t afford nice things and got in fights because her ex-boyfriend was a year older and the mascot on the football team, so the coaches would tell the football players that I was bad news and they would start shit. A lot of them were on steroids, a lot of them were Mexican gangbangers people who were on meth and getting stabbed.

Before anybody in my class made it out of high school, I was in a continuation, which I also got kicked out of because my friend Bart was also in the class and got into a big fight, which the teacher had to break up and did not want either of us in the school anymore, so I tried homeschool but that was never going to work. I was so far behind, it was never going to happen and by then I was training to be a pro fighter. My girlfriend knew it but had started dating Bart to make me jealous. He had a gun and neither of us wanted to piss him off because he would walk around with it.

Before I ever had my first pro fight, July 5, 2000, Bart had a party at his house. The night before, Stephanie had told me she loved me. After the party, I was gonna go back to her house with her brother — he was my best friend — but some friends weren’t doing well and headed to my house. So I had to go.

An hour later I got a call from her mom saying, ‘Are you with Stephanie?’ She came straight to my house to get me, took me up and down the Frontage Road on Highway 99 by my Grandma’s house next to their trailer park.

There was a wreck on the freeway. I jumped the fence and saw only one car and ambulances.

She had walked and killed herself on the freeway. The girl I loved more than anything had tried to kill herself for the third time and succeeded.

She was gonna go to college. She was an avid student and and was doing everything I couldn’t while living in a trailer park where everyone was doing dope.  Meanwhile, I focused my whole high school years worried about what her and her friends would think if I lost a fight to her ex-boyfriend and football friends. I could never make attendance, hung out with the wrong people to hold my ground as a fighter and someone who I would fight for was important to me.

There was no way I was gonna go to school. I had no money, no car. I would have driven there and stopped her. After that, I was grown up. It was all over. I wasn’t a kid anymore. I won my first fight in the first round with a choke and all I could think about was her, just like when I was in school.

I would run seven miles and back to her grave just to promise her I would make it as a fighter like she knew and had told me she knew and was proud of me.

So this sport and this commission have done everything to stop me from being in the position that I belong. That’s the only reason why I haven’t stayed in that position and come off as the fighter and person that I know I am and can be.

They suspended me for a third time. For five fucking years for something that makes the whole world a better place.

I’ve been investing in that understanding from the beginning. And I’m not going to start being someone that I’m not.

Honestly, I wanted to get up and walk out on the third question, but I didn’t do that. Now I have to deal with that. These guys advised me not to do that.

I wanted to get up and tell them what I think about them to their face. I didn’t do that. And now I have to live with that.

Guys like Conor, who are gonna make more money than me can see how to do it, as well as negotiate what they want in their contract using a team and agency and lawyers instead of their crooked jiu-jitsu trainer and coach, who was my manager for the majority of my career except for my last fight when I found the right agency on my own and signed with them, and I didn’t even graduate the motherfucking eighth grade.

But in the end, I’m just upset I can’t be there for my brother right now since he’s gonna be fighting soon. It’s my bad he even got into this sport and he gets his face kicked in and they don’t even pay him.

Diaz, despite being cleared to fight, has not returned to the octagon. Many fear that the 34-year-old has had enough and will never fight again. In four approximately four months time, it will be three years since fans of the Stockton icon watched him fight. The reason lies solely with the policies and red tape of the NAC, who seemingly had a point to prove with Diaz.

While we can only hope that this is the not the end of Nick Diaz as a fighter, at 34 years old, we may have already seen the best he has to offer. Regardless, a return to the octagon would make many a fan’s year.