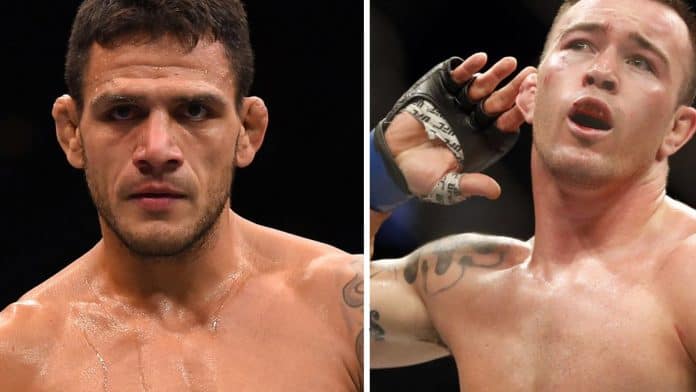 Rafael dos Anjos has been face to face with two of the most renowned trash talkers of the modern era. While dos Anjos and Conor McGregor were set to throw down at UFC 196 before his injury ruled him out, McGregor had ample opportunity to direct his infamous sh*t talk at the Brazilian

Now dos Anjos is heading into UFC 225’s interim welterweight title clash against a man many believe to be a carbon copy of the Irishman. The former lightweight champion is not buying Covington’s ‘act’, however.

“I grew up in Brazil in the favelas, man. Bullies, trash talking, doesn’t work with me,” dos Anjos said Thursday on a heated UFC 225 media conference call (via MMAFighting.com). “But I think Colby, he’s just trying [to be Conor McGregor]. Conor does it well. Conor, he’s a rich man, he makes a lot of money. He’s a businessman, and I can respect that. But Colby, he’s just a worse version of Conor McGregor. He’s trying to be like Conor, but when he loses to me, his career is done. All he has is talk, nothing else.”

“Dude, you don’t believe one word that’s coming out of your mouth, Ralphie,” Covington responded. “Let’s be honest, you ain’t teaching me sh*t. I’ve been to Brazil more than you’ve been there. You live in America, land of the free and home of the brave.”

“I ain’t fake,” Covington responded. “I’m as real as they come.”

Rafael dos Anjos is can land a second title in two weight classes with a win over UFC 225 following his impressive 3-0 record at welterweight with wins over Robbie Lawler, Neil Magny, and Tarec Saffiedine. Covington is 5-0 at 170, but it is his trash talking which seems to have elevated him to this position.

“I’m a cold-blooded fighter. I have no emotions,” dos Anjos said.

“Once I step in that cage, I’m just going to think about making that guy quit. Hurt him. Nothing else. Cold-blooded, always.”

The Brazilian believes that Covington’s behavior is far from genuine. For dos Anjos, his American counterpart is nothing more than two different people, depending on the environment and whether the cameras are on or off. Claiming that Covington is a quiet man of MMA when there are ‘people around,’ the 33-year-old is unimpressed with the image that “Chaos” is trying to project.

“Everybody saw him at media day in New York. When he sees people, he just sticks on his phone and he doesn’t even look around,” dos Anjos said. “This guy’s so fake. When he’s on the phone, he grows his balls. But on fight night, his balls shrink. I’m going to expose him.”

“You honestly don’t believe anything you say, Ralphie,” Covington shot back. “Let’s be honest, you’ve been ducking this fight since Singapore (in June 2017). We were supposed to fight in Singapore and that’s why you got moved below me on the card because you didn’t want to fight me. You said, ‘Oh, Colby, I had to Google you to find out who you are.’ Google me now, b*tch.”

The winner of this fight will likley earn a shot at Tyron Woodley’s title at some point later this year.