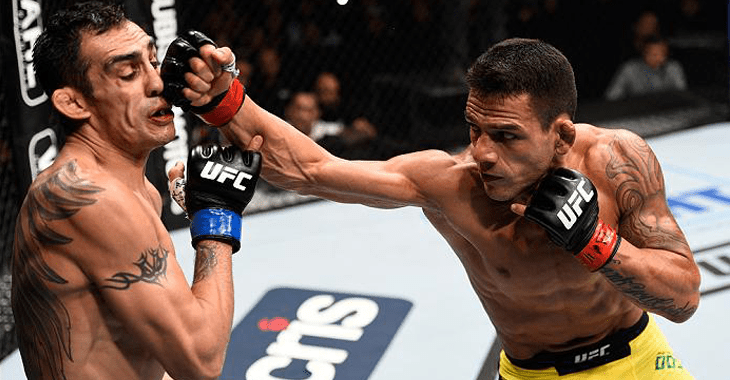 When Dana White claimed the headline bout of Saturday’s bout between Dos Anjos and Lawler would earn a title shot against Tyron Woodley, both fighters responded differently.

Woodley confirmed earlier this week that he will undergo shoulder surgery before the end of December, casting doubt on a return, though he is not expected to be on the sidelines too long. While there is understandable uncertainty for both men ahead of Saturday’s main event, Lawler is more comfortable looking forward to the fight then to a potential rematch against Woodley.

“I haven’t had any communication with (White), but I’m not too worried about that because you’ve got to win anyway,” Lawler told MMAjunkie. “We’ll see what happens after that. Just focus on the task at hand, go out there, try to showcase my skills and put my best foot forward.

“I’m going with the feel,” Lawler said. “See what’s going on around me. There’s training partners getting ready for fights, there’s coaches getting ready for fights. And how I feel. So there’s a lot of variables I need to make sure that are all aligned for me to take a fight. You just go out there and be as strong as you possibly can and be tactical and try to beat the other guy up just like you would at the weight below,” Lawler said. “The pace might be a little slower. There’s definitely advantages to moving up (for Dos Anjos).”

“RDA” lost his UFC lightweight title in an overwhelming defeat to Eddie Alvarez in July 2016 before current interim-champion Tony Ferguson got the nod on the judges’ scorecards in a Fight of the Night that November.

Having suffered back to back losses for only the second time in his career, Dos Anjos decided it was time for a change. Having suffered a horrendous weight cut in the lead up to the Ferguson fight, the Brazilian moved up to 170 pounds and has looked impressive in his two bouts as a welterweight. A decision win over Tarec Saffiedine in Singapore preceded a submission finish over Neil Magny, which was his first sub victory in over 5 years.

On Saturday’s UFC on FOX 26, dos Anjos has the opportunity to edge closer to a shot at Tyron Woodley’s welterweight title. UFC President Dana White announced that the winner of the headline bout between former 170-pound champ Robbie Lawler and dos Anjos will determine the opponent for the champion’s next title defense.

“I believe in what he said first, what Dana said first,” dos Anjos told MMAjunkie at the UFC on FOX 26 media day. “Of course, I have that picture on my mind, fighting for the belt, getting the belt. I’m still competing, because I’m thinking about the belt. I’m thinking about being a champion. By the time I don’t believe I can make it anymore, I will stop. I will retire. As of now I believe I can do it. I believe in Dana, and Dana’s first answer.”

dos Anjos is confident that he can capitalize on what he perceives is a downturn in fortune for Lawler, pushing the momentum he has carried from his perfect start to life at welterweight all the way to the top:

“He’s the kind of guy that doesn’t come to do an extra hour in the octagon. He just comes to finish,” dos Anjos said. “My goal is to fight for the title. My goal is to be a two-division champion. All the goals I set in my life I have accomplished. I’m sure I will accomplish that one too.”

While there is a considerable level of curiosity held by fans in seeing a rematch between Lawler and Woodley given the propensity both men have for powerful exchanges, a win for dos Anjos would solidify him as a genuine threat at 170 pounds. Should the Brazilian overcome the unenviable task ahead of him, he will certainly benefit from Dana White’s insistence on restoring order to the championship levels in the UFC.

Providing there are no extraordinary circumstances or surprising additions to the welterweight division, expect the winner of this contest to be squaring off against Woodley sometime in early 2018.