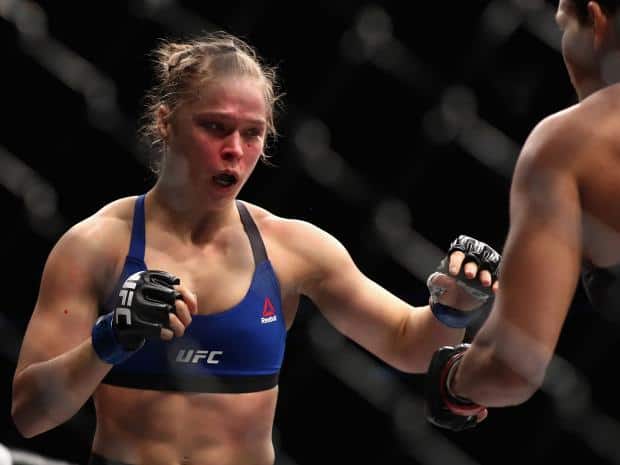 Prior to Holly Holm’s shocking knockout win over Ronda Rousey at UFC 193 back in 2015, she was labeled the ‘most dominant athlete alive’

From rivals such as Miesha Tate and Cris Cyborg to male bantamweights and even Floyd Mayweather Jr., the hyperbole which surrounded Rousey was deafening at times.

Fast forward to September 2017 and the once dominant UFC champion is nothing more than an afterthought. Having been absolutely obliterated in 48-seconds by Amanda Nunes in what was billed as her triumphant comeback bout in December 2016, Rousey left the octagon with her face, reputation and ego battered and bruised.

While Rousey has yet to confirm her retirement and has, for the most part, been quiet on her intentions for the future, her name was brought back to the fore by her much-maligned coach Edmond Tarverdyan this week. The Glendale Gym coach opened up to Ariel Helwani on the MMA Hour on a potential bout for Rousey with immensely talented and scarily destructive UFC women’s featherweight champion Cris Cyborg:

“It’s gonna be her decision, if she fights,” Tarverdyan added. “One more, I don’t know. I’ve spoken to her. I don’t know if she’ll do it. One more fight, maybe. If she really can. If her body does give her one more fight and she really wants to mentally, she might. It’s 50-50 right now I would say.”

Cyborg is widely believed to be as close to unbeatable in the world of women’s MMA that one can get to. For Rousey to be thrown to “the lion” as MMA legend Don Frye put it recently in an interview with Submission Radio sparked confusion in the MMA community:

“Is that that idiot [Edmond Tarverdyan] who tried teaching [Ronda Rousey] how to box but all she did was block punches with her face? That guy’s just out for the money. She needs to get rid of him and get rid of 90 percent of the hangers on and go back to Judo Gene Lebell and her mom and people who were there in the beginning who really care for her. Otherwise, stay the hell out of the sport because you’re just gonna’ get hurt.

Frye was very direct on Rousey’s prospects against Cyborg, essentially dismissing any chance Rousey could have against the dominant Brazilian champion:

She has no business being in the ring with Cyborg. That’d be like feeding the Christians to the lion. It would just be criminal to let her in there with that gal.”

Frye is not the only figure in the sport to question Tarverdyan’s motives. Former Rousey two-time losing opponent and arch-rival, Miesha Tate, saw the Glendale coach’s words as entirely selfish:

“I’m gonna give Cyborg a round of applause, because she wouldn’t look more like a bully than if she took that fight with Ronda,” Tate said on her SiriusXM radio show MMA Tonight. “That would be ridiculous. It’s just nonsense to even think about that. I cannot believe that Edmond would suggest something so asinine.

Tate believes that Tarverdyan’s motives for wanting Rousey to fight are not just selfish but absolutely transparent (via MMAFighting):

“It’s just kind of silly,” Tate said. “I think Edmond just wants another payday so he can try to pay off his bankruptcy issues, because Jiminy Christmas. Poor Ronda. I’m not her biggest fan, but I wouldn’t even want to see that fight. I’m not her biggest fan, but I wouldn’t want to see her get slaughtered by Cyborg at this point in her career, either. It’s not appealing. That’s not what this sport is about. It’s about great competitive matchups and I just don’t feel like it’s even fair to ask for something like that. If you were looking out for your athlete, why would you do that?”

It is crazy how much can change in the space of fewer than two years. Rousey, as previously mentioned, was celebrated as an almost goddess-like feminist idol who was branded as unbeatable prior to November 2015. In September 2017, the name Ronda Rousey holds absoultely no power over the world of MMA and there is something incredibly interesting about that.