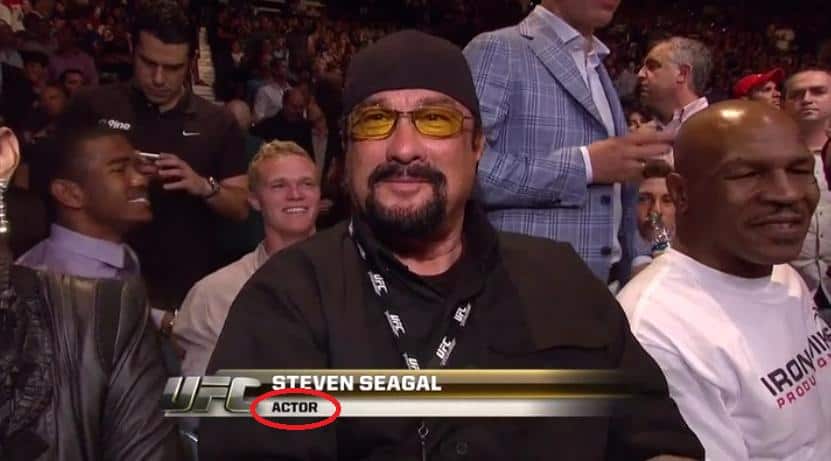 Former action-movie star and serial liar Steven Seagal claims that he taught UFC megastar Conor McGregor “everything he has ever done”. McGregor, who reigned over both the featherweight and lightweight divisions of the UFC without defending a title, is the biggest star the sport of MMA has ever known

According to Seagal, “The Notorious” would be “just another kid from Scotland eating haggis out of a bag” had he not taken the 29-year-old under his wing.

“When I first saw him,” Seagal said very slowly and in a Japanese accent, for some reason, “he was eating haggis watching Braveheart. “I said ‘Conor McGregor, I am Sensei Seagal. I will make you a star.'”

“Conor was wearing a kilt, and I asked him to wear this jumpsuit I had which was given to me by Bruce Lee when I was signing an autograph for Elvis. McGregor cried and then dropped to his knees, kissing my hand and begging me to show him the ways of the flying tiger monkey,” Seagal added.

Despite Seagal’s assertions that he “Met McGregor in 1978 in London, Scotland,” it is clear that McGregor would not have been alive at this point, as was not born until 1988. McGregor was born in Dublin, Ireland and not “London, Scotland”. In fact, there is no London in Scotland, as it is the capital city of England. When we put this to Seagal, he simply put his pointer finger to his lips and said “Shhhh. You don’t understand martial arts”.

Seagal, who is best known for his roles in cheesy action-movies such as Under Siege and Nico, has made some incredible claims in the past when it comes to other fighters. For example, Seagal once claimed that he taught UFC legend, Anderson Silva, the front kick which he used to defeat Vitor Belfort in 2011.

Aside from this, Seagal has also made some questionable claims about his background in martial arts. In 2002, the actor claimed to have taught a Komodo dragon Aikido and trained five gorillas to beat up a gang of bikers who were ‘terrorizing’ his neighborhood. It is the claims regarding McGregor which will catch the attention of fight fans around the world.

“When I met McGregor… I, uh, told him that there are many important things which a fighter must learn. Only I can teach these things” Seagal said. “I saw it in his eyes. He had this thing, like… it was like the eye of the tiger. That was a song I wrote in 1975 after I got into a fight with a tiger and poked his eye out with my pinkie before making a jacket out of his fur.

“Then, Conor asked me: ‘Sensei Seagal. How do I become more known? Nobody knows me and I want every single person on this planet to know my name.’ I said… Conor, you will be notorious. Conor said ‘notorious? I Like it’. That’s how he got his name; I gave him his name”.

Seagal also claimed that everything McGregor has ever achieved or done is directly down to him:

“I taught him how to box, I taught him how to kick. I even taught him how to tap out when he is locked into a rear-naked choke. Everything,” Seagal said. “I showed him how to knock out a Brazilian in 13-seconds, how to fight with the eye of the tiger. You know, Sensei Seagal – me – knows everything in how to be the best fighter on the planet. That’s why McGregor calls me the greatest thing to ever happen to him. If you listen to his interview following the Aldo fight, he clearly said “Sensei Seagal, baby, we did it!”

“The reason why McGregor holds me up like a God is that I also taught him the art of the mouthy horse, which is, of course, an ancient Japanese form of trash-talking. I also decided that McGregor talk with an Irish accent; Dublin-accent, to be precise”.

Perhaps the strangest claim that Seagal has made to date is that he also instructed McGregor to do the things which have seen him fall afoul of Irish gangsters, jump into a Bellator cage and cause trouble, and be arrested in New York:

“I…[Seagal pauses for a while, scratching his hair transplant] told Conor to piss off the gangsters. Hell, I taught him how to throw that dolly through the bus window in New York. Ask Conor and he will tell you. If it wasn’t for me, he’d still be living under a bridge in Scotland getting bullied by locals”.

Conor McGregor was asked to comment on the claims, and he responded:

“Who the fuck is Steven Seagal?”