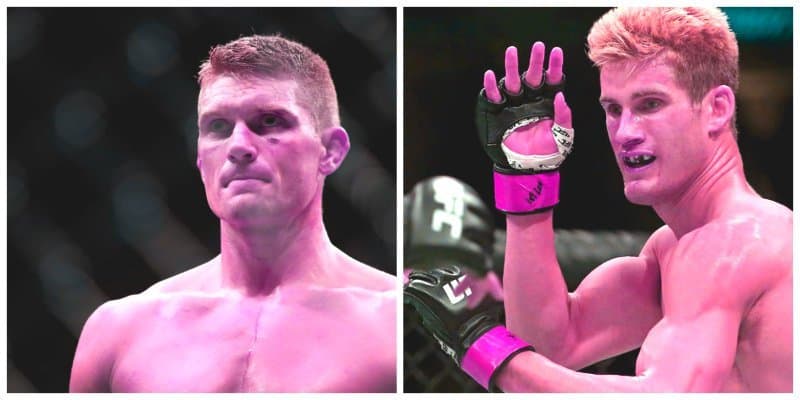 Perhaps the two nicest guys in MMA, Stephen “Wonderboy” Thompson and Sage Northcutt, are not known for their foul mouths or trash talk. That’s why it was surprising to hear both men have been “at each others’ throats” following a disagreement

A source close to Northcutt told MMAFullContact that the “war of words” has been getting out of control recently, with Northcutt referring to Thompson as a “great big doo-doo head,” and Thompson allegedly leaving voicemails on Northcutt’s phone in the early hours of the morning.

“Sage is receiving a number of really nasty voicemails from Thomspon,” the source said. “For example, he woke up to go for a run and ‘Wonderboy’ left a message calling him a ‘big stupid idiot.’ Sage then lost his cool and responded to Thompson to say that he looked like a ‘huge dumb gorilla butt’.

“Now Stephen is escalating things even further. Just this morning, he face-timed Sage and told him he is a penis head. It’s really getting out of control.”

Both men are far from known for their explicit trash talk. At risk of ruining their clean-cut and boy-next-door images, both men seem intent on verbally destroying the other. According to language expert Reginald Wordsworth, both men are “inappropriately venting their anger through the conduit of inappropriate language” and “cases such as these can escalate” significantly.

“Today, it’s ‘gorilla butt-face’ or ‘seagull hair’ but tomorrow it could escalate to stuff like ‘idiot’ or ‘dumb ass’ and no one, let alone these two guys, want to go down this road,” Wordsworth said. “Before you know it, they could be sending each other hurtful memes. This is a worst-case scenario, and I wouldn’t like to sensationalize anything, but you really have to think of the children who train UFC and emulate their heroes.”

What exactly led to the shocking exchange of words is not known, but it appears that something significant must have happened for both men to engage in such appalling behavior.

“Let’s just hope that both men can realize the error of their ways and move on. The last thing we need in professional sport is this kind of language. As I said before, today it may be ‘big stupid face’ but tomorrow it could be something a hell of a lot worse. Like ‘ass lips’ or ‘coconut tits,'” Wordsworth added.