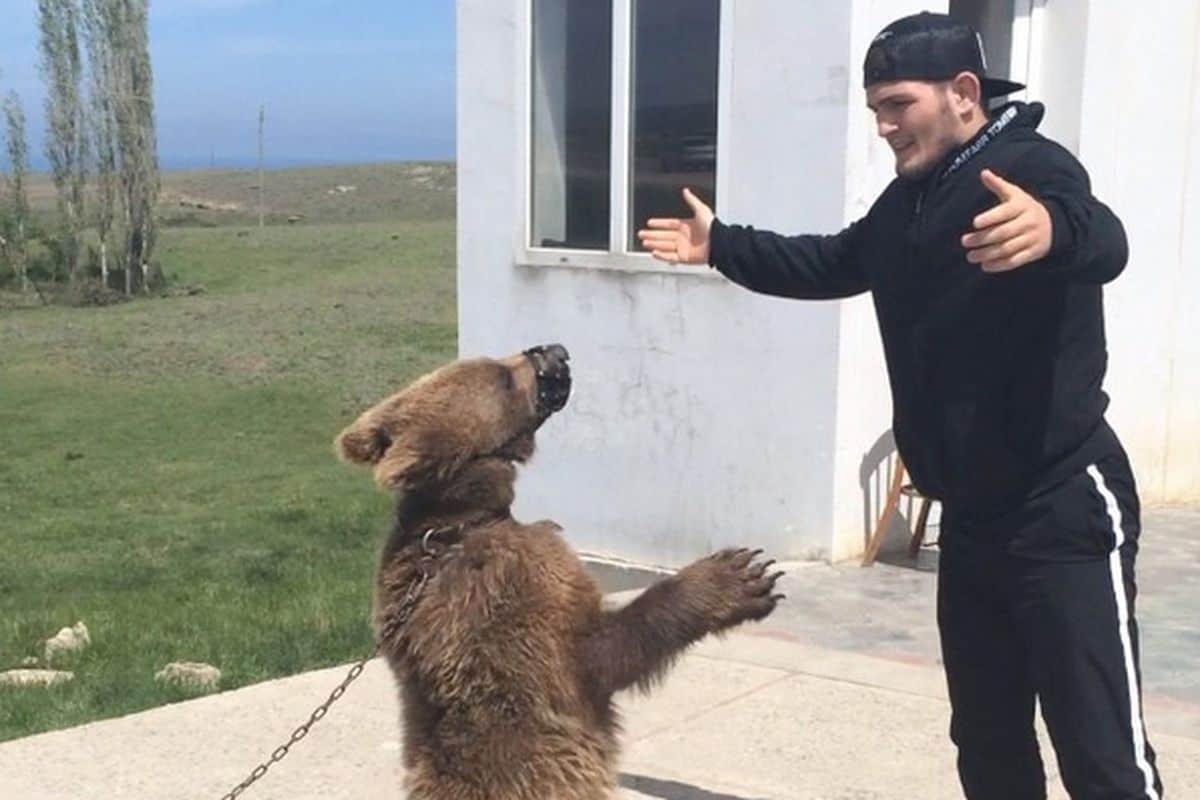 UFC lightweight champion Khabib Nurmagomedov is rumored to be in the initial stages of negotiating terms for a fight with promotional superstar Conor McGregor. “The Notorious” may have a little competition in the form of an old enemy of “The Eagle”

Nurmagomedov’s early days in fighting are famous in Dagestan. Having first learned how to walk on a gym mat, the lightweight phenom was destined for a life in the fight game. At just 9-years-old, and led outside the gym by his father, Khabib was shown a bear cub by the name of Toblerone, who had been harassing local village kids and being a general nuisance.

While the bear cub cut an imposing figure in the back of the gym, Khabib mustered up all the strength he had and gulped. Abdulmanap – Nurmagomedov’s father – snapped at his son and demanded that he show the bear just exactly who he was f**king with. Khabib looked the bear in the eye, stuck his middle finger up and dove for the bear’s paws. The rest, as they say, is history…

Following Nurmagomedov’s capture of Conor McGregor’s UFC title, a beautiful homecoming was arranged in the Russian’s hometown of Makhachkala. One notable presence was the bear Nurmagomedov had battled as a youth, standing in the shadows, observing the lightweight champion’s success. Toblerone – now known as Dmitri Sokolov, a local car mechanic – spoke to MMAFullContact.com about his desire to settle the score once and for all:

“I feel he take all glory, and I don’t feel this, eh, glory and praise is earned until he do battle with me, one more time. Everyone know Khabib; everyone love Khabib, around the world, for he is now UFC champion,” Sokolov told us via an interpreter. “Make fight with Khabib and give me chance to take him to places he never been before. OK, so he fight Al Iaqunita and beat him for title? Iaquinta is not even top 10 in division. He is fraud and did not beat McGregor or Ferguson yet number 1? I have no understanding of this sh*t”.

With such tangible disappointment in Toberlone’s voice, it is hard not to sympathize with his views. This is a bear who truly believed that he would one day be enjoying the fruits of a successful fight career, and the adulation and love of his people. Having shown great promise as a young boxer and sambo fighter, he believes that the shame inflicted on him by the Nurmagomedovs was enough to push him into quitting his dreams at a young age.

“I run away to circus, man,” he said. “I gave up dreams of fight to travel, cos I was ashamed, brother. My family never looked at me the same. My father called me derogatory names, like Paddington Bear, or Yogi Bear. I was told I was embarrassment to bears. You know, I thought I won the fight. Khabib know that I went easy on him, I take him not too seriously as I thought ‘hey, he too small’. Look now – I work as f**king car mechanic while Khabib is star. I am true star, I am true fighter.

“The only way to do this is to have UFC fight for title. He has belt, I want belt. People say ‘he too light, you too heavy’. Man, I see Khabib eat tirimusu like 80 times in day. He lose weight, I lose weight. It make sense. I beat Khabib in world title fight and people of the world love me. I be best bear in world since Winnie Pooh, man. I take bear pride back, and I don’t mean in gay way.”

Despite it looking unlikely that Nurmagomedov would consider a bout with Sokolov, it will be interesting to hear his response to the bear’s claims. Unrelenting, Sokolov – formerly known as Toblerone – will be willing to fight him for free:

“This guy take everything, motherf**kers. Hey, Khabib Nurmagomedov, I fight you motherf**ker. I not surprised, motherf**ker. Do right thing and fight me to show you true king and not number one bullsh*t. Let’s do it, man, and show world that you are not afraid to fight the best. Otherwise who you fight? McGregor? Bork Lester? Tony Ferguson will never happen. Man he got beat up by cable. Come fight me and lets do this.