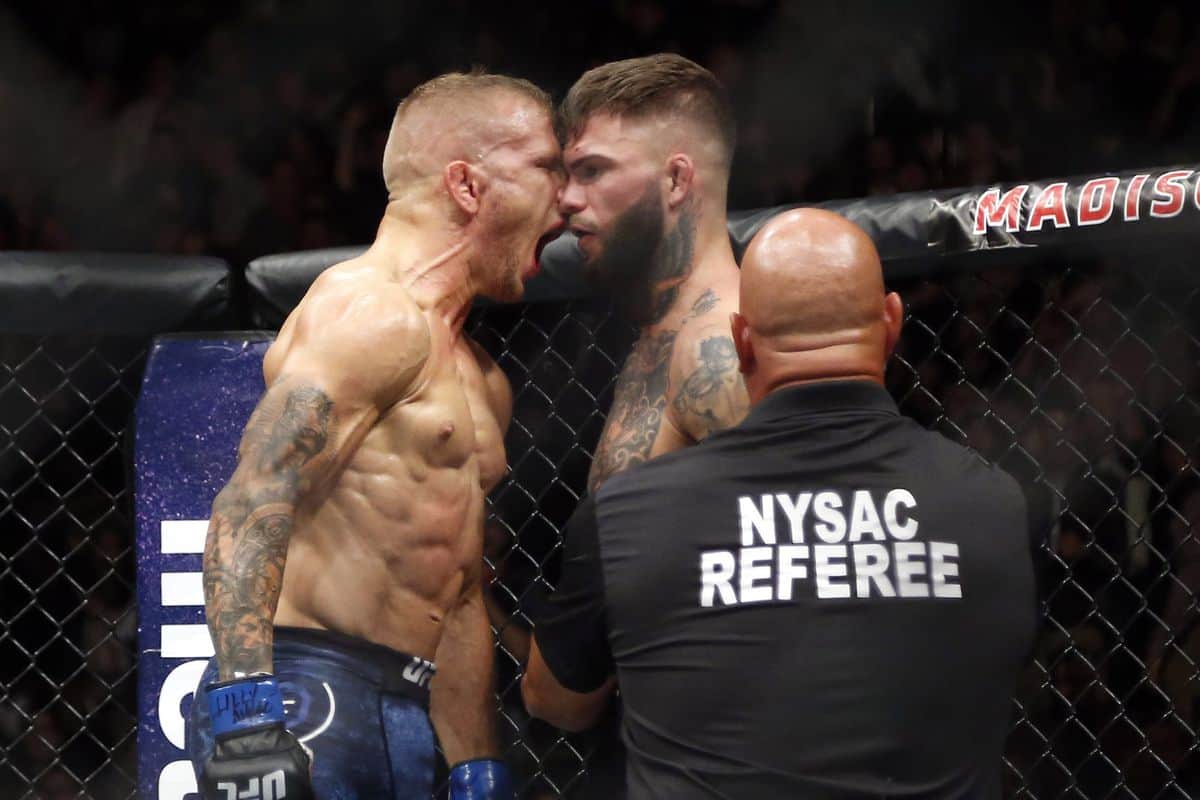 The well-documented hatred between Dillashaw and Garbrandt has been brewing for a long time and needs no introduction.

That acrimony was introduced to the octagon on Saturday night and culminated in a stunning KO for Dillashaw. Garbrandt immediately claimed that he deserved a rematch after the bout:

“I go out there and live or die by the sword and I’m willing to put the work in that needs to be to obtain the goal that I set out to do. I’m not going to die with dreams, I’m going to die with memories. This isn’t going to stop me from chasing a dream that really saved my life since as a young child what I wanted to be was a world champion and I’ve been here before. I’ve lost a lot in my life and I feel like if this is the worst thing that happens in my life then I live a really good life, I have so many blessings coming to me.”

According to Dillashaw, Garbrandt may have to learn the art of patience to find himself in the reckoning for another title shot:

“I just finished him in the second round. He doesn’t deserve a rematch,” Dillashaw said Saturday at the UFC 217 post-fight press conference. “He’s very new in this sport, he needs to work his way back up. I should’ve gotten a rematch after that (Dominick) Cruz fight (in Jan. 2016), a very close split decision that I thought I won, and I did not get it. It took me a year-and-a-half — well actually, almost two years — to get it. So yeah, I think he’s going to definitely (need to) build himself back up.”

Garbrandt claimed that he respected Dillashaw as a fighter but not as a person. This is a sentiment shared by Dillashaw towards his foe:

“I respect him as a fighter as well,” Dillashaw said. “I do not appreciate, me or my family — as you can see, my brother got very emotional after the fight — have not appreciated the accusations and just the crap talk, and trying to diminish my name and who I am. So, that’s one that I won’t ever forgive him for. But I do respect him for being a great competitor and I’m sure we’ll see him again. But yeah, he’s lost a lot of my respect. He’s lost all of the respect from my family.

“My brother’s in my corner, and like I said, he’s been very offended by some of the things and accusations, and the way that some of my really good friends — that I thought were — have treated me,” Dillashaw said. “And he’s an emotional guy. He loves me more than anybody I know, and he was just backing me. All he said was, ‘What?!’ And we know Cody’s a hot-head as well, and so he went after him, then he had to get escorted. Escorted from MSG — that’s another one to put on the bucket list, I guess.”

Dillashaw made the point of being mindful of bringing a professional attitude inside the octagon and ensuring that the bad feeling held towards his rival did not affect his psychology when it came down to the fight:

“This is professional for me. If I was going to get into it, like you’re saying, and be pumped about beating Cody, then I would’ve fought emotional,” Dillashaw said. “I would’ve been angry about fighting him. So I kept it at a professional level and knew that I was fighting to get back what I thought was rightfully mine. I mean, I don’t lose that split decision to Cruz or (Raphael) Assuncao, I’m on a 13-fight win streak. We’d be talking about me being the best pound-for-pound fighter in the world. And those are the things you’ve got to swallow, and just know that you’re chasing your dream.”

Dillashaw will likely be presented with the option of an immediate rematch against Garbrandt, given the electrifying nature of the bout on Saturday night and the interest MMA fans have in seeing that bout happening. For now, the 31-year-old can bask in the glory of a job well done.