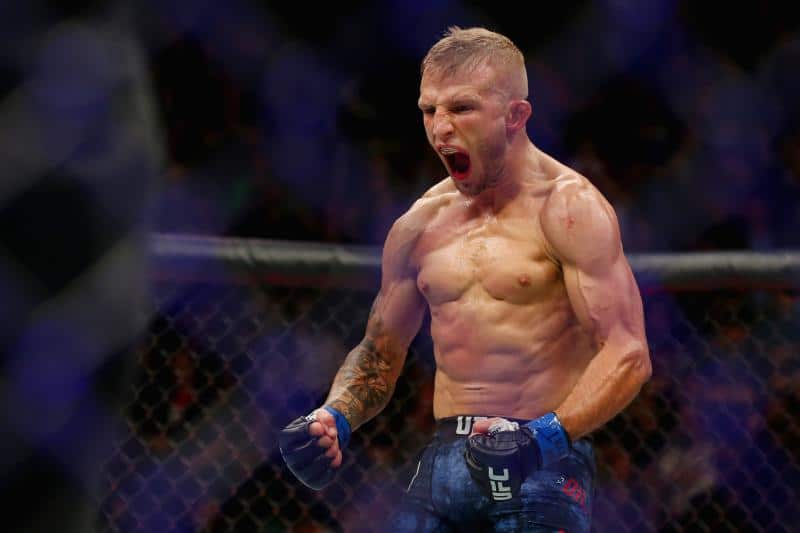 For now, at least.

In the lead up to that fight, which also included a canceled bout at UFC 206 in the summer, the well-documented feud between Team Alpha Male and Dillashaw was enough for Ludwig to well and truly run as far away from that type of drama as possible.

Ludwig told Ariel Helwani on a recent episode of The MMA Hour that he intentionally avoided getting caught up in the war of words between both camps:

“I tried to look at from a broader perspective and just realize that it was an excellent challenge because they really knew how T.J. and I trained, they understand our system – our system of three years ago, we’re always progressing and improving – and it was just good to get another win and not really make it personal but just keep it business,” Ludwig said. “And that’s the best way that we both operate… I chose to take the high road in all this and not really get into a battle about anything and just make sure that we’re focusing on the task at hand, and that’s improving in our martial arts skillset so that we can become the best that we can and not jump on Twitter or any social media handles and bicker back-and-forth with anybody, but to, again, focus on the task and hand and improve…

“Because we had a lot of people look at us right now and how were we reacting to that, how we would react when someone gets in our face and challenges us to a fight and just bickers and brings up all this – it seemed to me seriously like I was back in high school. That’s what it felt like. So it was good for me to experience that again and show the people that were watching how to handle that situation, so I am grateful for the way it went down.”

Ludwig blames Team Alpha Male patriarch Urijah Faber for stirring the pot between both sides when he claimed that both men hatched a Machiavellian plan in order to set their own thing up away from the Californian-based outfit. Ludwig claims both were effectively ‘booted out’ of the setup, arguing a difference in opinion led to the rift.

With Dillashaw now setting up his own gym, the coach insists that there is no bad blood:

“I’ll always make time for T.J. and he knows that,” Ludwig said. “I’ll always make time for a lot of people, even after the fight with Cody, I had a heart-to-heart with Danny Castillo, it was really emotional for me, I generally love and care for those guys, we’re a family and a team and to have this drama, f**king I was crying and s**t, I was like, ‘Man, I love you guys, if you need anything please let me know, I’m sorry there has to be drama.’ It just goes back to my personality, if I’m in, I’m all in… I just want to say I still love those guys, I’m sorry that there’s drama and hopefully we can move on.”

While the issue with Garbrandt was sorted, Ludwig does not believe the drama is over just yet:

“Cody, he got dropped and got up right away, as soon as T.J. was punching him the second time when it got stopped, he was up right away,” Ludwig said. “There is no quit in that kid. He is definitely a tough character, you cannot look past him at all. He is super fast, he surprised me. I was going, ‘We’re in for a fight after that first round,’ so I knew we had to change things up.

“I do see him in the future for sure, without a doubt. It could be next year. We’ll see how much the UFC likes him and how much the fans want to push him to see a rematch. He’s going to have to earn his way up, I mean he got stopped in the second round. I think he needs to make a couple of fights and works his way back up just like T.J. did.”

Ludwig is certain that a fight between Faber and Dillashaw would be music to the ears of the UFC, though it may not be much of a contest:

“Not to be disrespectful, I’m not trying to be an assh**e in any way, but that would be a pretty easy fight for T.J,” Ludwig said, later adding, “Anything can happen in a fight, but because I used to coach both of them, I used to watch them spar many, many rounds, so I have memories of which direction the sparring rounds could go.”

“It’s not solely me, but I helped (Dillashaw) a little bit,” Ludwig said. “But he does improve and Faber doesn’t improve. He had a very hard time picking up my system. He’s just set in his ways and that’s good because it’s been successful, but the sport has evolved and he hasn’t so it would be in my eyes a pretty easy fight for T.J. and I would like to see it just because they’d both make some money off it, it would be good for the sport, in every direction it would be good.

“I’m not looking forward to dealing with drama again, they seem to love drama, I do like to stay away from that, if it does happen, just let it be a regular fight where we train and we do our interviews and we go and fight.”