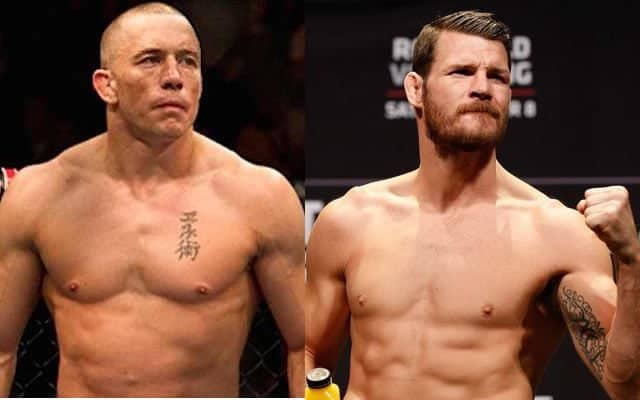 Despite never being known for big finishes in his MMA career, Georges St-Pierre has warned Michael Bisping he will not make it to the judges’ scorecards

Bisping has frequently referred to the Canadian’s propensity to take the fight to the floor, claiming that it is a ploy to avoid a ‘real fight’.

The UFC middleweight champion appeared alongside the challenger St-Pierre in Toronto on Friday as part of a press conference ahead of UFC 217. Bisping took advantage of the opportunity to criticize St-Pierre’s style ahead of the unlikely match up in November:

While “Rush” is not exactly known for his big finishes (his last one was against BJ Penn all the way back in 2009) the Canadian has alluded to things changing in his second stint in the UFC. Having made his intentions clear to fight in a more aggressive manner, St-Pierre may have convinced many, but Bisping is certainly not one of them:

“Listen, here’s the thing. I don’t doubt you’ve been working on other things because that’s what we do as martial artists, but at the end of the day you can’t reinvent the wheel,” Bisping said. “The fundamentals are still the same, the same kicks, the same punches, the same submissions. What? Have you invented a new submission I’ve never seen before? A kick I’ve never seen? What exactly are you going to do?

“You’re going to jab, jab, double leg, bore everybody to sleep. I, on the other side, am going to try and knock you out.”

Bisping clearly believes that the Tri-Star Gym star pupil will not deviate from the gameplan which saw him dominate the 170-pound division. St-Pierre was renowned for his cerebral execution of a strategy which was based predominantly on a sound wrestling game and an efficiency in stifling his opponents’ strengths by smothering them on the floor. The Manchester-native is so confident in knowing what to expect from “GSP” that he has dedicated his training camp to his takedown defense and neutralizing St-Pierre’s skills:

“This training camp predominantly has been working on stopping people taking me down and smothering me and cuddling me and stopping fighting and trying to focus on actual fighting,” Bisping said. “Trying to give the people a show, Georges. Trying to fight. What’s it called? ‘The Ultimate-what-Championship’? What’s it called? Is it ‘Wrestling’ or ‘Fighting’?”

“You know, I tried watching his fights, I fall asleep all the time,” Bisping continued. “I swear to God, I do. I sit there, I have a coffee, which is a stimulant to keep me awake and I still can’t do it. I fall asleep every time.”

While being as renowned for his calm and respectable demeanor as his efficient and hardworking style inside the Octagon, St-Pierre has shown clear signs of being annoyed by Bisping’s brash and often aggressive behavior. When the Englishman asked St-Pierre to confirm who the last fighter was that he finished, the former UFC welterweight champion indicated that he was more interested in looking towards the future than the past:

“You’ll be the next,” St-Pierre replied. He’s the next one. It’s not going to go five rounds.”

Bisping also commented on the efforts the UFC have made in promoting the fight, understanding that there is a special feel to events. Despite the ceremony, the Brit is remaining composed:

“Honestly, I couldn’t care less. I have been fighting in the UFC for a very long time. Twelve years now and you don’t need a reminder that I am here. You need reminding that Georges is back because he is the guy that ran away.”

“Now fair enough, he had a lot of pressure, he was the champion for a long time. That is the narrative of the whole story, he is coming back and stepping up a weight class. So yeah, it doesn’t bother me that there is a bit more limelight on him. At the end of the day, it leaves me alone. Filming that stuff takes time. I’ve been in the gym, training,” Bisping added.