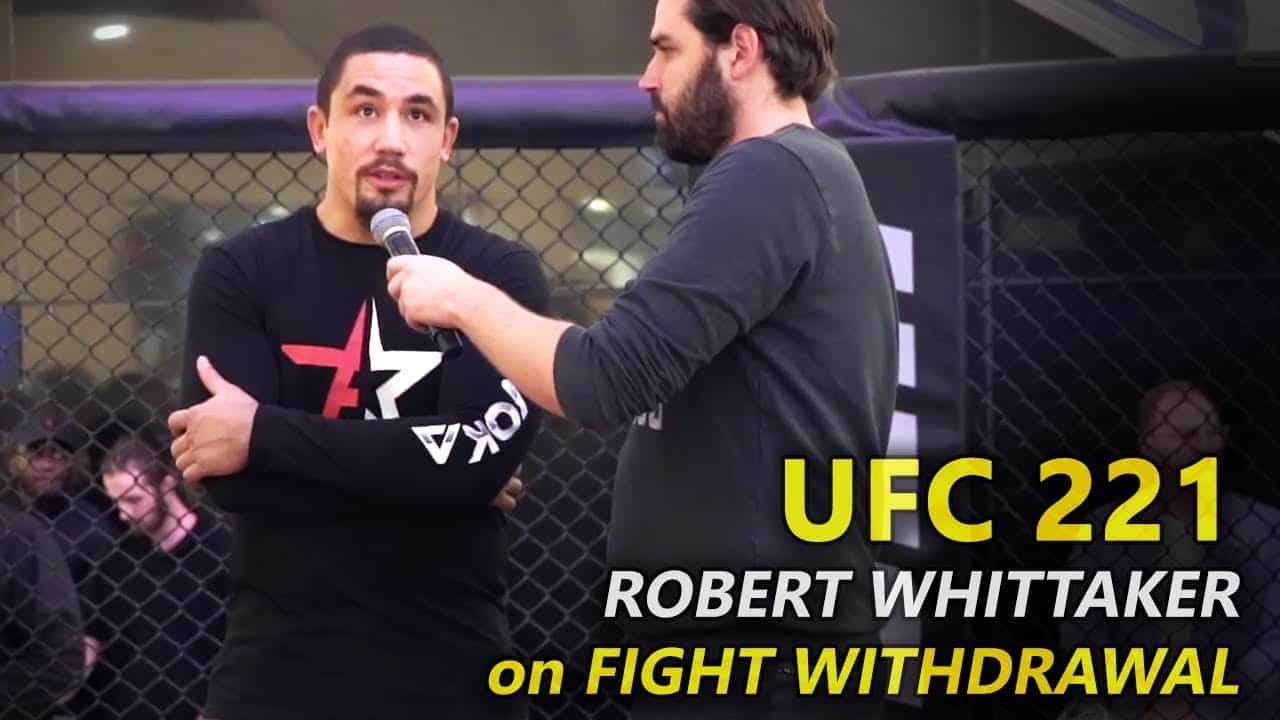 Robert Whittaker surprised many when he beat Yoel Romero by unanimous decision to become the UFC interim middleweight champion at UFC 213. The winner of Michael Bisping and Georges St-Pierre at UFC 217 was meant to determine his next opponent for the unified crown, and when St-Pierre beat Bisping, Whittaker was jubilant at the prospect of facing one of his idols.

Unfortunately, things have a habit of working against certain fighters. St-Pierre decided he would vacate the title he won against the Brit, making Whittaker the champion of the division outright. Whittaker’s first task as champion was to defend former champ Luke Rockhold at UFC 221 in Perth, Australia. Whittaker picked up a staph infection and was ruled out of a dream title defense in his home country.

Less than two weeks ago, UFC president Dana White worried many when he declared Whittaker was in “serious condition”:

“He had a staph infection in his stomach,” White said. “From what I understand it wasn’t treated properly and started to eat away at parts of his organs. He’s in serious condition, so it’s going to be a minute before he’s back, I think. Hopefully, it turns around quick, but that stuff is life-threatening if not treated the right way.”

Whittaker spoke at the recent UFC 221 open workouts, Whittaker spoke in depth about the troubles which have led to him missing out on his first title defense (via Submission Radio):

“Everyone knows I like to fight injured,” said Whittaker. “Half the fights I’ve taken I’ve always been injured. Just before I got ill, I pulled my hamstring. We could work around it and we were doing things to compensate for it, we were working around it, but then I got a really bad infection and the infection and the antibiotics just took it out of me. I was really struggling to recover and then right at the end of the infection, I got the chickenpox [laughs]. That’s why I’ve got the scars all over my face. It was an absolute mess. If anyone’s had it, it’s just horrible [laughs].”

Yoel Romero has replaced the recovering Whittaker against Rockhold for what will be the Cuban’s second shot at an interim title, and a possible rematch against “Bobby Knuckles” for the UFC middleweight championship at some point later this year. Whittaker claimed that he was happy with the choice of replacement:

”When they offered this outcome to me I was delighted,” said Whittaker. “The number one and number two contenders get to bash each other, and I was just like, ‘Yes. Good. Please.’ As a fan of this sport, I would’ve paid to watch this fight. This is a fight I think people want to see, and I’m more than happy to bash Yoel again or I’m more than happy to give it to Rockhold as well. We’ll see.”

Whittaker is aiming for a return to action at some point in the summer. When he is back to full fitness, a bout with the winner of Romero and Rockhold looks the most likely scenario for the popular Australian:

”I’m just focused on recovering,” Whittaker said. “I’m gonna let Yoel and Rockhold punch it out a bit, but things are good and I’m looking for a big return mid-year. So let’s see what happens.”

Luke Rockhold, on the otherhand, believes that he will have too much for Yoel Romero in Perth:

“I know Yoel believes in himself. I know he is almost overconfident at times. I think he doesn’t really understand where the dangers are I pose to him. I know what he is and what he’s capable of, but I’m going to give this guy more than he can handle,” he told MMAJunkie recently.

“I’m going to shut him down. I’m willing to go deeper than he’ll ever go. Some people act the part. Some people talk the part. But to be the part, to go there and to get into those moments, I’ve never been outdone,” Rockhold added. “I’m willing to go deeper and darker than any of these motherf*ckers. Yoel can look it, and he can act it, but I’ll bring it out of him, and I’ll push this thing to a different world that he’s not ready for.”