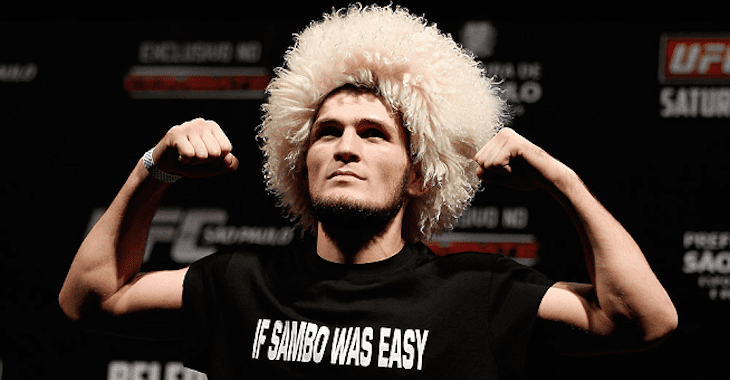 Khabib Nurmagomedov reportedly declined an opportunity to fight for his first UFC title, claiming that he was ‘unavailable’

“Just to clear things up, a fight was offered to Nurmagomedov on Nov. 4 (at UFC 217), and at that point, we were trying to put cards together toward the end of the year,” UFC matchmaker Sean Shelby told UFC commentator Jon Anik. “I was informed that (Nurmagomedov) could not make that date, and he probably wouldn’t be able to fight until at least December, so that left Tony without a dance partner.”

No further details were provided other than Nurmagomedov rejected the bout on the pay-per-view card at Madison Square Garden in New York City. The Russian’s manager Ali Abdelaziz was reached out to but declined to comment.

Earlier this month, Nurmagomedov changed his stance from highly aggressive towards Ferguson to cordially requesting to face the winner of the interim title fight between Ferguson and Lee. Shelby also intimated that Nurmagomedov’s loss was Lee’s gain – “The Motown Phenom” landed the biggest bout of his career on behalf of the UFC accepting that they could not wait for Nurmagomedov:

“We backed Tony up, and Kevin Lee was there,” Shelby said. “Look at his resume as of late. He’s a phenomenal fighter. He’s doing fantastic. Right now, I think he’s the hottest thing in the division.”

Ferguson alleged that Nurmagomedov’s manager informed the UFC that Nurmagomedov wasn’t ready to fight – Nurmagomedov, on the other hand, accused Ferguson of rejecting the matchup. UFC President Dana White also confirmed that the unbeaten Dagestani was “not ready.”

Kevin Lee will now have the opportunity to upset the apple cart of the lightweight division against Tony Ferguson. The Detroit-native is riding a five-fight win streak into the fight against Ferguson, who is 9-0 in his last 9 fights. Both men are keen to get their hands on the strap, which they both hope will edge them closer to a huge payday and further notoriety in the world of fighting.

Lee is firmly focused on the win, yet is skeptical of the UFC’s rankings system:

“I don’t see why even other fighters are putting [stock in the rankings],” Lee said. “Them rankings, they don’t matter. Y’all make the rankings. I don’t give a f*ck about them rankings. The only thing everybody above us in this division got on me is some years, is some time. That’s it. So, when you look at the rankings, they don’t really matter. You look at some of these dudes who are in the top 25, top 30, they’re tough enough, they would beat any of the guys in the top five.

“They got Nate Diaz, who’s got 10, 11 losses, in the top five. It don’t make sense. They’ve got Justin Gaethje, who’s only got one fight against — apparently beating Mike Johnson in this game is really something, because you’ve got Khabib (Nurmagomedov) up there at No. 1 and [he doesn’t] fight, you’ve got Gaethje with one fight up above me. The rankings don’t even mean sh*t. So you can say I’m No. 7. You can say whatever you want to say. I say I’m No. 1 and it’s going to be proven on Oct. 7.”

As for Lee’s views of Nurmagomedov, the 25-year old is convinced that, despite the Russian’s impressive winning streak, he would be an ‘easy’ fight:

“I’ve been wanting to fight Khabib just because he would’ve been an easy fight,” Lee said. “That’s the name of the game, the most amount of money for the easiest fights. I’ve been calling his ass out for over a year, he’s going to keep downplaying me. All these dudes are going to keep downplaying me. That’s how the whole thing started with me and Tony.