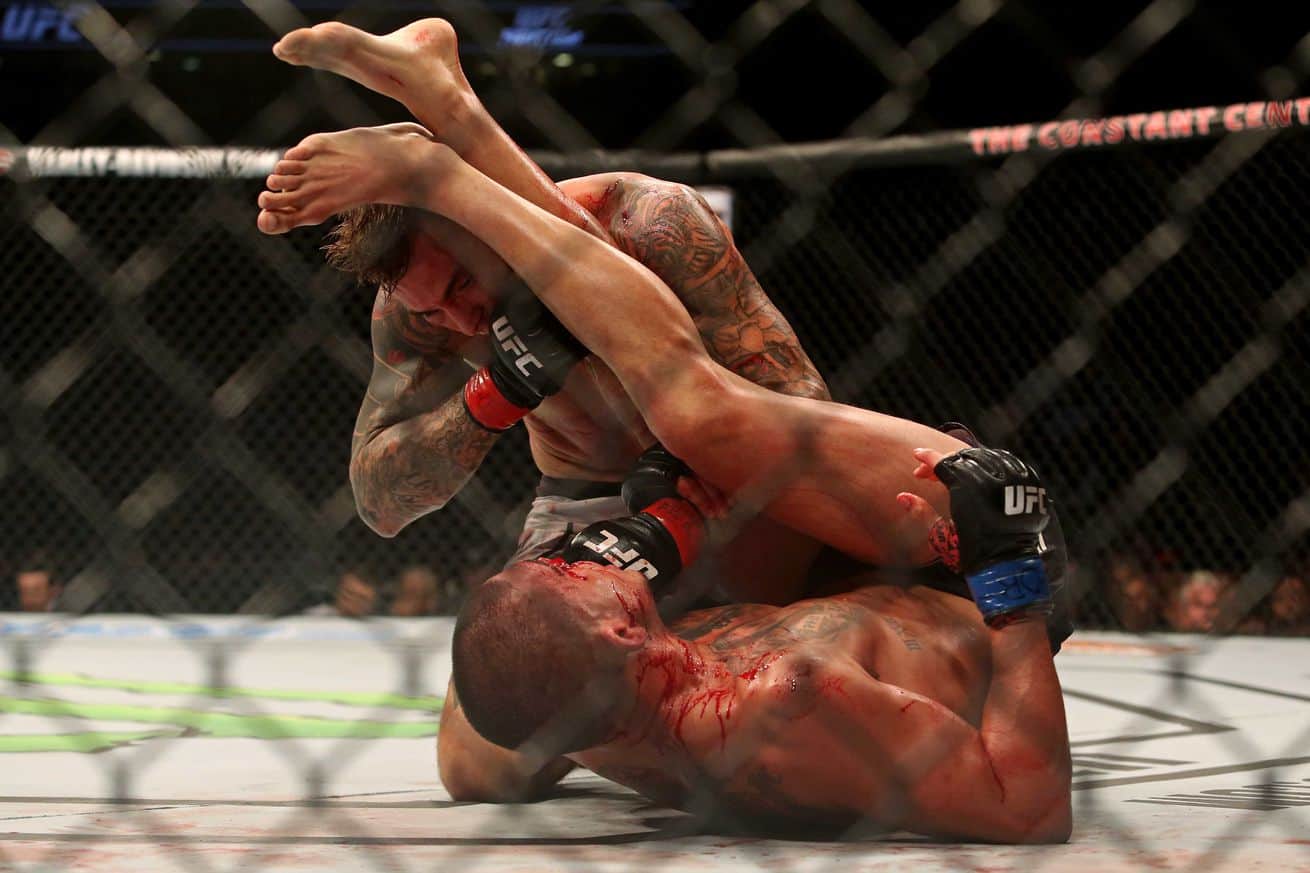 Saturday’s card in Norfolk, Virginia featured a lot of promise to fight fans expecting a series of battles and wars

Things didn’t quite work out that way, however.

The main event of the evening saw former WEC and UFC lightweight champion Anthony “Showtime” Pettis take on perennial contender Dustin Poirier. The bout was a cracker (in many senses of the word) which culminated with a cut and bloodied Pettis tapping to Poirer following what looked to be a rib injury.

The bout was awarded Fight of the Night honors and was an explosive contest until things came to a halt in the third round. Poirier was certainly up on the cards by then and was establishing dominance over “Showtime”. Having won the contest and pushed his way into the upper tiers of the division, Poirier was clearly satisfied with his performance. Rather than a broken rib ending the contest, however, “Diamond” believes it was a “broken man”:

“I think it was a broken man more than a broken rib,” Poirier said at the post-fight press conference. “But that’s my thoughts, you know. I think … hopefull, nothing is wrong with the guy. But I felt like the fight was slowly slipping away from him after the cut and after the takedowns, he realized I was strong and I was gonna stay on top. He couldn’t submit me.”

The bout was stopped in the second round to allow a doctor to assess the cuts Poirier inflicted on his opponent, which was odd to the 28-year-old:

“When the doctor came in, I was kind of wondering why it was taking so long,” Poirier said. “And I kept seeing the doctor wipe and look at the ref and talk and then wipe his eye and his nose again.

“I thought they were gonna stop the fight, really. Because it was taking too long and he kept talking to the ref. But they let it go on. I’m happy for it. Those deep, dog fights — I love that,” Poirier said. “That’s why I fight. Those opportunities, those kind of scrambles, that’s why I get up in the morning and go for runs and push myself harder, because I love to fight. When it was happening, I was just happy that I was in that kind of fight. The crowd was going nuts every time we switched. It was a lot of fun, man.”

Another fighter who certainly enjoyed himself last night was UFC veteran, Matt Brown. “The Immortal” was expected to announce his retirement following his victory over the jaded Diego Sanchez but revealed post-fight that there may be scope for him to continue:

“To be honest, I’m not even thinking about it right now,” Brown told MMAjunkie following his victory over Diego Sanchez “It’s not even really a thought in my mind. I’m thinking about enjoying tonight, and we’ll talk about it later.”

Brown will invariably make a decision on his future over the coming weeks but has insisted that he will not be influenced by any external forces:

“I’ve definitely had more people tell me not to retire than to retire,” Brown said. “But nobody other than me and my family really has any bearing on that – and close friends. So I’m not even going to allow anybody else’s opinions to get into my mind like that.”

Clay Guida absolutely pummeled fellow bonus king Joe Lauzon earlier on the card in one of the more surprising results of the night. “The Carpenter” looked tremendous in his performance, blitzing Lauzon in one round. The result was not enough to earn him another bonus but certainly puts him in the reckoning for another big bout.

Matt Brown’s destruction of Diego Sanchez with a nasty elbow knockout and Raphael Assuncao’s third-round knockout of Matthew Lopez however be$gged both men a cool 50K.

Athelete outfitting pay for UFC Fight Night 120 (figures via MMAJunkie.com) can be found below: