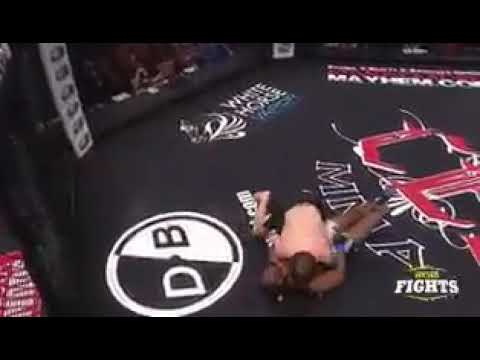 This fighter probably didn’t expect to be knocked out ahead of his bout in Lincoln, Rhode Island, on Friday at CES MMA 48. It is unlikely that he could have imagined that he would be knocked out by himself, but that is what happened when Timothy Woods and Tim Caron were in the clinch against the cage and Woods aimed to throw Caron to the mat

Woods’ head, however, went straight to the mat which knocked him out almost immediately upon impact.

Thankfully, Woods is believed to be fine and recovering from the scary KO.

When martial arts movie superstar Jean-Claude Van Damme accidentally kicked Cody Garbrandt in the head during a casual training session at Team Alpha Male in Sacramento, footage showed the former UFC bantamweight champion in a pretty bad mood.  Garbrandt told Ariel Helwani on Monday’s edition of The MMA Hour that Van Damme had simply ‘lost control’ in the lead up to the incident:

“He just can’t control himself,” Garbrandt said of Van Damme. “He got too excited in there. He was running all over the place like he was on shit.”

Garbrandt also claimed that Van Damme had been out all night drinking with Team Alpha Male the night before, turned up two hours late to the gym and took an extremely long time to warm up prior to stepping into the cage. Van Damme had requested time with Garbrandt to show him some ‘moves’ but there was little to no enthusiasm on Garbrandt’s part:

“What is Jean Claude gonna show me?” Garbrandt said. “I respect the guy. But he’s two hours late, he had to warm up. I was annoyed by the whole thing.”

As both men were engaged in light sparring, Van Damme kicked Garbrandt in the face and sent “No Love” into a quiet rage. The former king of the 135-pound division said that he was so angry that he had to warn the Belgian’s manager and friend to intervene before he retaliated:

“It was just a circus act, to be honest,” Garbrandt said. “I looked over at this buddy and his manager. I was like, you gotta get this guy out of my face.”

Garbrandt also said everyone in the gym stopped doing what they were doing, as Van Damme fell to his knees and began sobbing and crying as a means to apologize to the 26-year-old. Garbrandt also said that he had word that Van Damme had done something similar in the past:

“It looked like I punched him and dropped him,” Garbrandt said. “People didn’t know he kicked me. I was just annoyed with the guy and I’m like, ‘all right, I’m done with this fool’ and walked out of the cage.”

Garbrandt claims that it is all water under the bridge and that he harbors no resentment towards the movie star. While he may have been upset at the time, he can see that there is no point in feeling any acrimony towards Van Damme. Garbrand even went as far as to attend the “Kickboxer: Retaliation” in Los Angeles a few weeks after the incident. Van Damme had not attended this particular showing, according to Garbrandt.

“He’s an old guy,” Garbrandt said. “What am I gonna do? Pummel him? It’s a lose-lose. We’re cool. I went to his premiere. It is what it is. He’s just a sensitive Hollywood guy.”

“I’m squashing everything,” Woodley said (transcript via MMA Mania). “I’m focusing on getting the shoulder together. One-by-one, everybody will get these hands. I don’t know the order. I don’t know who’s next. But I never wanted to bounce around and not continue to defend my belt. I’ve been here for a while and I plan on knocking everybody out.”

“I’m going to take a woosa,” Woodley continued. “So if you people want to know about the Dana beef, about the Frankenstein beef, about the Queefington beef, I don’t want to talk about it. I’m focusing on being successful.”

Woodley is currently recovering from shoulder surgery and is targeting a comeback at some point this year. It is believed that Rafael dos Anjos will be Woodley’s opponent.