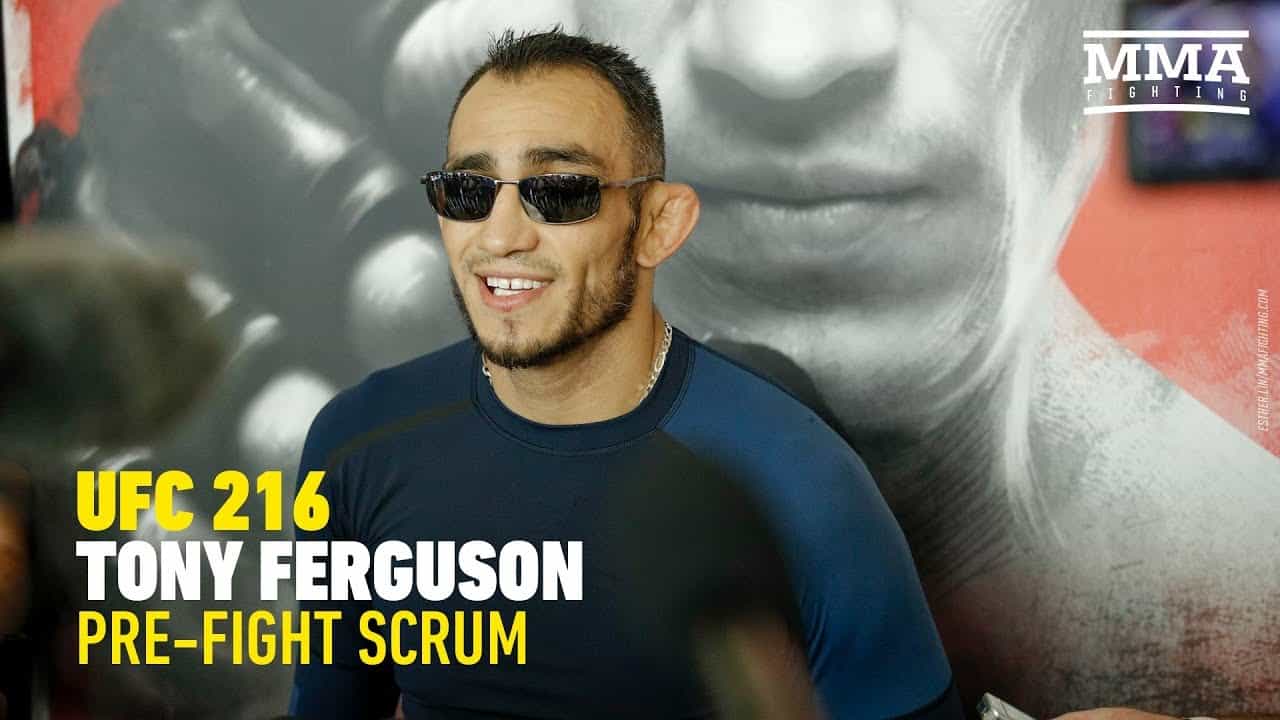 The lead up to the centerpiece at Saturday’s event at the T-Mobile Arena between the two has been heated.

While both men have professed that they are far from taking the other lightly, both Ferguson and Lee have been clear in stating that they do not like each other. While the lightweight division has effectively been on lockdown with incumbent champion Conor McGregor’s boxing jaunt, number 1 contender Khabib Nurmagomedov’s injury woes and a lackluster approach to matchmaking, this bout may very well sort things out.

Ferguson, who is currently riding a nine-fight winning streak into the bout, is confident in his approach towards what will be his first piece of silverware in the UFC:

“I know how to beat bullies like that. You squash them verbally,” Ferguson told media assembled at UFC 216 open workouts (h/t MMAFighting). “And the one thing is, if you have a brain, you can use it. You don’t have to use aggression to squash somebody. You have to use your brain. You have to be smart out there. You’ve gotta be smart, you’ve gotta use your wits. Wits always win, man, in the battle of brain versus brawn.”

Ferguson has taken issue with Lee’s seemingly lack of disrespect. Lee has another perspective altogether:

“He’s a weirdo,” Lee said bluntly. “Like I said, I hit you with facts. He comes up with all these scenarios in his head. I told him, you’ve gotta stop smoking whatever it is you’re smoking, bro, because I don’t know. I just let him do what he do. He talking about ‘I’m a fake’ and all of this, but let’s be honest, the man’s a Mexican from Michigan, he can’t even speak Spanish. So it is what it is, he’s a weird dude. I don’t really like going back and forth with him. It’s frustrating.

“I think you can even see it on my face, because I’m just like, ‘Bro, what are you talking about?’ They asked him a question about McGregor and he’s bringing up some — I don’t even think he’s really listening. It’s just, he’s a weird dude and it’s hard talking to stupid people a lot.”

Ferguson does tend to cut an unorthodox figure, both inside and outside of the octagon, and Lee believes his unique mindset will come into play on Saturday night:

“With him, it’s not even so much of a technical thing. It’s his mindset that drives him through a lot of these fights,” Lee said. “He’s in the fights, he’s getting hurt, but he comes back and he’s hurting other guys, and he’s able to weather them storms. So I’m going to bring a hurricane to his ass, and I don’t think he’ll be able to weather it. I think the first round is going to go terribly for him, the second round is going to go terrible for him, all the way through the fifth.

“I feel like I’m built for five rounds, I’ve always said it. I think all my fights should be five rounds. So from here on out, they will be, because I’m a smarter fighter. I go back to the corner, I reassess. If I have a tough round, I start the next one and it’s going to be smart, so the more time I get in between the corners, the stronger that I’m going to get, the more I’m able to dissect guys, and you see it in all of my fights.”

“It’s very intellectual. The reason why you guys say it’s weird is because you don’t understand it,” Ferguson said. “It’s f*cking genius. Let me tell you, it’s so far past your guys’ heads it’s not even funny, because this is the next stage in everybody’s evolution. I’ve been working on this since 2008; actually, before that. I said I had a double doctorate in athletics, I’m working on my triple.”

Ferguson also insists that Lee is going to be brought heavily down to earth come on Saturday night:

“Whatever he’s going to think, if it’s the real lightweight title or whatever it is, this kid hasn’t earned the right to talk,” Ferguson said. “Not one bit.

“You guys deserve a better me, man. I’m primed. I’m the best. But it’s hard when you’ve got a knucklehead like Kevin Lee that wants to just keep pushing that button. So for me, I have to be a captain of the team, and this guy wants my spot on that team. He wants that varsity spot. So I’m going to treat it like it’s a competition, not a fight. I’m going to go in there and give him a T.F. — an old Tony Ferguson technical fall. I’m going to outpoint him then I’m going to pin him.”