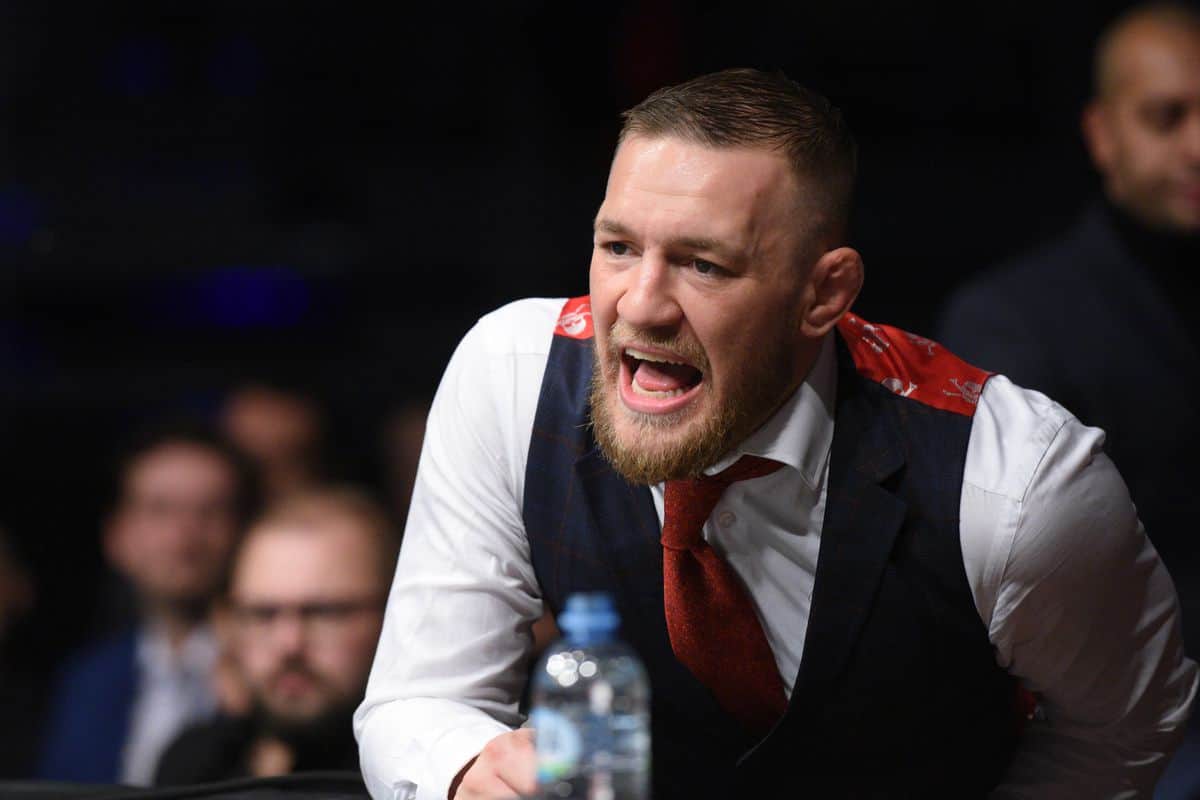 These are certainly troubling times for fans of the UFC lightweight champion and global superstar.

Perhaps the most pertinent indication of McGregor’s mindset came prior to last week’s antics at Bellator 187 when “The Notorious” jumped the fence of the cage and was involved in an altercation with referee Marc Goddard which led to him also slapping a Bellator official.

McGregor spoke of how hard it was for him to get ‘excited’ on the prospect of a bout with Tony Ferguson, given the fact that he had earned an approximate $100 million from his Aug. 26 bout with Floyd Mayweather Jr. The Irishman compared (although the figures were never confirmed) pay-per-view buys in that fight against what he would potentially garner against Ferguson:

“We’re in negotiation stage right now. That’s a lengthy process,” McGregor told the BBC (via MMA Weekly). “They’ve got to make me excited about it. I came from a crazy event, a record-breaking event, the billion dollar fight it was labeled. I made insane money. Then the opponents they’re trying to line up for me, an opponent [Tony Ferguson] with a $600,000 gate in Las Vegas.

Not long after, the aforementioned incident with Goddard ruled him out of what many had expected to be his first title defense in the UFC against interim champion Tony Ferguson. Mike Mazzulli, the president of the Association of Boxing Commissions, told Ariel Helwani that the UFC personally told him of McGregor’s punishment on Monday’s episode of the MMA Hour:

“The bottom line is that he [McGregor] was unprofessional, disrespectful and it was not acceptable in my eyes in any situation. I don’t care if it was anyone else jumping in the cage, we don’t do that as a professional. McGregor is not bigger than MMA. I had executives from the UFC contact me within two hours after what occurred.”

Mazzuli claimed that the UFC pulled McGregor from the UFC 219 as a result of his actions:

“They basically said to me that it’s completely unacceptable in their eyes, and they will be doing something. They did inform me that he was set to be on the December 30th card, and he will not be on it.”

McGregor’s head-caoch, John Kavanagh, reportedly told MMA journalist Farah Hannoun that his pupil would not return to the UFC until April to mid-2018 at the earliest:

Great to see @John_Kavanagh again. No cropping this time! ? pic.twitter.com/3fkJUKMMYU

So where does this leave McGregor? Having held the UFC lightweight title for over a year while he awaited the birth of his first child and took on boxing legend Floyd Mayweather Jr., he is still yet to defend that title. How much longer can the UFC allow a division to be held up on account of a fighter’s reluctance to defend until he is given a better deal? The 29-year-old has publicly stated that he wants a stake in the promotion and appears to be holding out until he gets what he wants.

McGregor is certainly not short on options and also has the opportunity to engage in at least a few boxing matches should he play hardball with the promotion. When boxers begin frequently calling out the Dubliner (despite his claims that he was returning to MMA) for potential bouts, it appears that someone may know more than they are letting on behind the scenes.

Things got even weirder this week when boxing icon and Olympic gold-medalist, Oscar De La Hoya announced that he was ‘secretly training’ for a bout with the Irishman:

“You know I’m competitive,” De La Hoya said, speaking on DashRadio (h/t The Mac Life). “You know I still have it in me. I’ve been secretly training. Secretly training. I’m faster than ever and stronger than ever. I know I could take out Conor McGregor in two rounds. I’ll come back for that fight. Two rounds.

De La Hoya dismissed any suggestion that he would fight McGregor inside the octagon:

McGregor may have something up his sleeve and it would not surprise many to see him head towards another bout inside the squared circle. If that is the case, we may have seen the last of Conor McGregor in the UFC, or at very least, the last of hiim as a UFC lightweight champion.