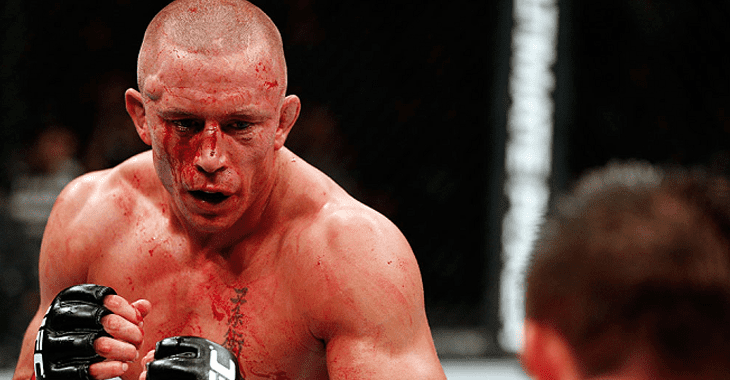 St-Pierre returns to the octagon for the first time in four years, having last fought in a defense of his former title against Johny Hendricks in 2013.

With concerns over ring rust and a lack of competition resounding from fans and critics alike, “GSP” will be buoyed by having iconic boxing coach Freddie Roach in his corner against the Brit.

Roach, who has been instrumental in the careers of boxing legends such as Manny Pacquiao and Miguel Cotto, confirmed that he is playing a major part in the training camp of the former dominant welterweight champ.

The Wildcard Gym founder firmly believes that St-Pierre will be returning to the UFC  a ‘stronger’ fighter:

“He’s getting better and better. He’s a little bigger, a little stronger than he has been in the past because this fight is going to be in a higher weight class. He has a little more weight on him, and he punches with a lot more power,” Roach said in a recent interview with Fight Hub.

“He did really really well. I’m going to be heading up to Montreal pretty soon. For six weeks, I’ll spend 3 days a week in Montreal, and 4 days here,” he said. “He wants me in the corner. He wants me in the ring, in between rounds, and I said no problem.”

In terms of his preparation for the bout, St-Pierre has seemingly drafted Roach in with a plan to attack Bisping on the feet. The Canadian legend previously worked with Roach prior to his retirement and credits the famous trainer for developing the solid jab which became a key part of his arsenal towards the later stages of his first stint in the UFC. Roach is relishing the challenge of cornering St-Pierre in his first bout as a cornerman in the promotion:

“He’s in with a big tough guy, and it should be action-packed. I’m excited with my first UFC fight.”

“[Michael Bisping] is a tough guy. He comes to fight. I don’t think he’s the best athlete in the world. I think Georges is a much better athlete, and I think that will be the difference in the fight. His athleticism will take him through the fight.

When news emerged of St-Pierre working with Roach, Bisping stated that it simply ‘didn’t matter’. The Brit, who will defend his title for just the second time since beating Luke Rockhold at UFC 199 in 2016, also downplayed ring rust being a prominent factor in their fight:

On a recent episode of his Believe You Me podcast, Bisping said that St–Pierre’s shape is ‘irrelevant’ to their UFC 217 showdown:

“I think he looks exactly the same,” said Bisping. “He looks in great shape, he looks athletic, he looks like he probably just had a good pump and he’s probably stood next to a dwarf. Not a dwarf but he’s probably not the biggest guy.

“I know [Georges] is a good wrestler, he’s a strong guy. He’s working with Freddie Roach which I couldn’t give a s**t about to be honest. . . I’m really not concerned about what he’s gonna do or what [Roach] is gonna improve him on and I hope that he improves his boxing to where Georges wants to stand and have a boxing fight with me. I hope he does that.

“The only way he wins this fight is by taking me down and holding me down or getting the submission because he ain’t winning on the feet and he knows that.”

“What you’ve got to remember is that Georges is no idiot. He’s really not. He’s a very intelligent guy and his approach to the game has always been an intelligent approach. He knows what he’s doing. He’s been preparing for this for a long, long time. All this year he’s been preparing for it and probably the year before that. . . He’s gonna come with a game plan and be very well prepared and I actually think that the detrimental fact of being away for four years is also going to make him very hungry and we might see the best performance out of him ever.”