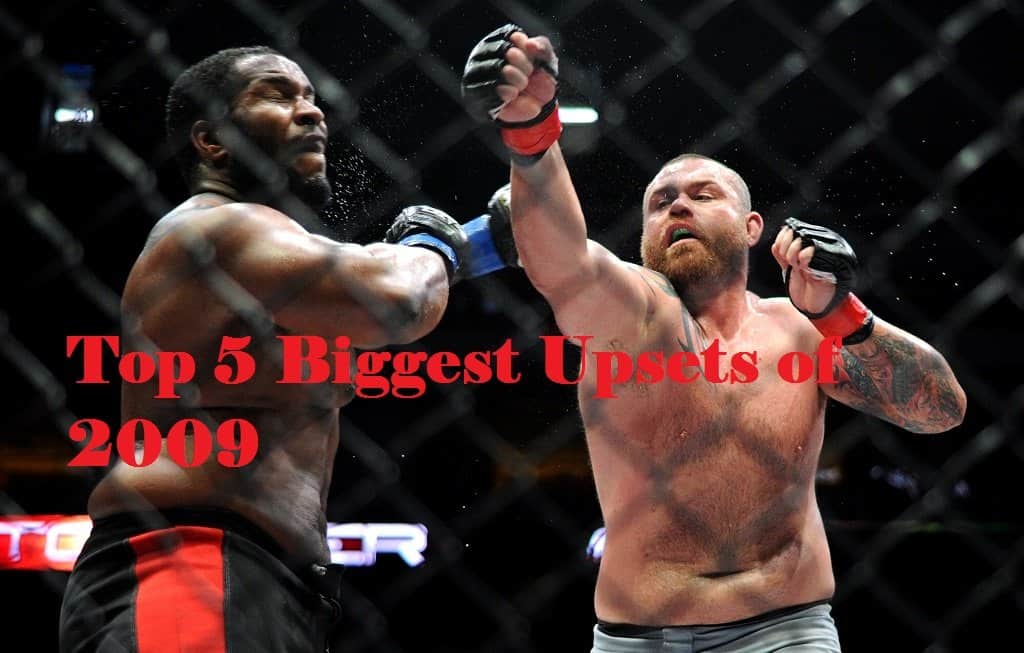 Wow, 2009 has flown by. Although it’s not over, for me, it’s been a year of modest accomplishment. I’m still a million dollars shy of being a millionaire and spend more time driving to/from work than actually being at work. However, the UFC has enjoyed significant growth, has more money than ever, and, thankfully, has provided some great fights to soothe my personal agony.

Including “Fight Nights”, 15 UFC events are already in the books this year, with several more on tap. Being that the next event isn’t until October 24 (UFC 104 – Machida vs. Rua), I thought it might be a good time to release the official MMA Full Contact “Top 5 UFC Upsets of 2009 (well, so far)” list. Oddly enough, in 2009, there haven’t been any real shockers like Matt Serra topping Georges St. Pierre, but, there have been a few results that raised my eyebrows (and drained my wallet). Without further adieu, or ado, or whatever it’s supposed to be, here’s the list in chronological order.

Paulo Thiago vs. Josh Koscheck
Event: UFC 95 – Sanchez vs. Stevenson
Date: 2/21/2009
Method: TKO (Punches)
Round: 1
Time: 3:29
Fight Description: The first upset of the year had relative unknown Paulo Thiago knockout welterweight contender Josh Koscheck at UFC 95 in the “very first round” (in my best Bruce Buffer voice). The heavy handed wrestler was expected to run through Thiago on his way back to another shot at the title against GSP. Although the slight Thiago was undefeated coming into the fight, the consensus was that Kos would catch him standing. As the fight progressed in the opening minute of the fight, it looked very likely that Koscheck would do that. Instead, Thiago stunned a lunging Koscheck with a beautifully timed uppercut. Lights out, my sweet prince.

Shane Carwin vs. Gabriel Gonzaga
Event: UFC 96 – Jackson vs. Jardine
Date: 3/7/2009
Method: TKO (Punches)
Round: 1
Time: 1:09
Fight Description: Now thought to be a legitimate threat to Brock Lesnar, heavyweight Shane Carwin can fondly look back at this fight as the fight that put him on the map and in line for a title shot. Coming into this fight, Carwin had brutalized all previous opponents, but none of the caliber of Gabriel Gonzaga. Carwin’s victories over Neil Wain (who?) and Rick Slaton (who?) aside, many had just begun to hear of the bomb-dropping wrestler. Gonzaga stunned his bulky opponent early then left his chin open for a fighting ending short right from Carwin. Now Carwin will get to pick on someone his own size in Brock Lesnar just before Thanksgiving…. gobble, gobble!

Mark Coleman vs. Stephen Bonnar
Event: UFC 100 – Lesnar vs. Mir 2
Date: 7/11/2009
Method: Decision (Unanimous)
Round: 3
Time: 5:00
Fight Description: Wrestling powerhouse and UFC Hall of Famer Mark Coleman went the distance for a decision victory over former TUF finalist Stephan Bonnar at July’s spectacular UFC 100. At first glance, there’s usually nothing surprising about a UFC Hall of Famer adding another victory to his resume, however, in this case, Coleman earned the victory at 44 years old. Bonnar has topped Keith Jardine and James Irvin in his career, and arguably won the first fight with Forrest Griffin, so Coleman didn’t beat a chump in Bonnar. In an exciting fight, Coleman showed markedly improved cardio in scoring multiple takedowns throughout with some trademark “ground and pound”. A highlight of the fight was seeing the “Antidote” take Bonnar’s back late in the fight. Who says getting old sucks?

Vitor Belfort vs. Rich Franklin
Event: UFC 103 – Franklin vs. Belfort
Date: 9/19/2009
Method: TKO (Punches)
Round: 1
Time: 3:02
Fight Description: Well, where do you start with this one? The Phenom was making his return to the Octagon after a four year absence and wasn’t given much of a chance against Franklin in this fight at a catch weight of 195 lbs – especially after appearing in less than spectacular condition at the pre-fight weigh-ins. Franklin has long been considered a top shelf middleweight with only a few losses on his record to the likes of Anderson Silva, Lyoto Machida, and Dan Henderson. Belfort’s career has had its ups and downs, including a two year stretch where he dropped 4 of 5 and most thought his best days were past him. Belfort caught Franklin with strikes early in the matchup and proved that he still has it. Next up for Belfort could be Anderson Silva…. that’s the reward?

Junior dos Santos vs. Mirko “Cro Cop” Filipovic
Event: UFC 103 – Franklin vs. Belfort
Date: 9/19/2009
Method: Submission (Punch)
Round: 3
Time: 2:00
Fight Description: In this fight, Cro Cop was looking to get back in title contention with a win over the undefeated rising star Junior dos Santos. “Experts” were saying that Cro Cop was refocused on fighting, and, because of this, was riding a three fight win streak coming into the fight. Most figured Cro Cop would likely catch dos Santos with his trademark left high kick or punish him with strikes in general. Instead, Cro Cop looked lethargic in all three rounds and verbally submitted to a dos Santos punch late in the fight. Even if it went the distance, Cro Cop had no chance – his effort against the surprising dos Santos was universally panned. Cro Cop subsequently revealed that his thoughts were elsewhere stepping in the Octagon and is now seriously considering retirement.

Disagree? Then leave some comments!