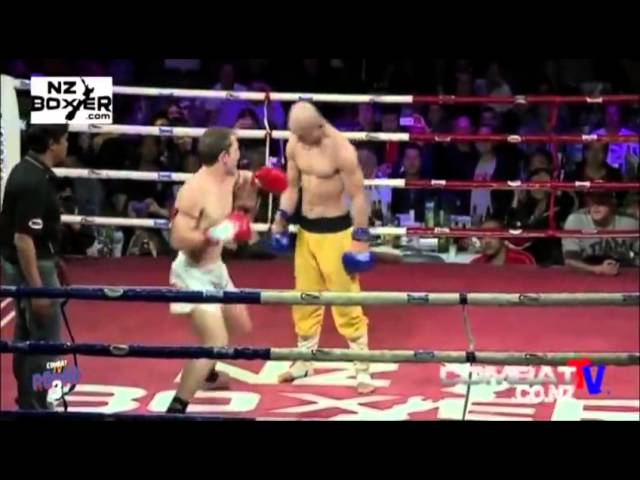 Yi Long, who was promoted as a Shaolin Monk from China, introduced the world to his “iron chin” technique while taking on a Muay Thai fighter on a Combat TV event.

Exhibiting “Shaolin Kung-Fu” against his Thai Boxing opponent, Long appears to defy the law of physics as he dropped his guard and encouraged his opponent to throw vicious shots into his face.

In the past, fighters have been knocked out in the past with what would appear to be less powerful shots. Long’s strategy of allowing his opponent to wear himself down before going for the win replicates something of a Shaolin-style meets Homer Simpson fighting tactic. Inevitably, this is what happened, and Yi Long then proceeds to beat the crap out of the kickboxer in a casual fashion.

In 2010, Yi Long fought alleged an American Police Officer and former Marine by the name of Adrien Grotte. Grotte gave the “Shaolin Monk” a convincing ass-kicking. From there on, he came back all guns blazing and re-established himself before knocking Grotte out cold in a rematch in 2014.

While many disputed the authenticity of Yi Long’s Shaolin Monk claims, the fighter persisted in allowing himself to be marketed as such. Speculation as to why and how he could take such a severe barrage of punches and remain not just conscious, but able to come back so strong and finish his opponent, is up for debate.

Fans inside the arena that night could not believe their eyes when Long stood, feet planted, allowing his opponent to punch at will. Why is certainly unclear.

Regardless, this craziness makes for pretty good viewing. Hit the play button below, and bask in the weirdness of Yi Long’s super-chin: