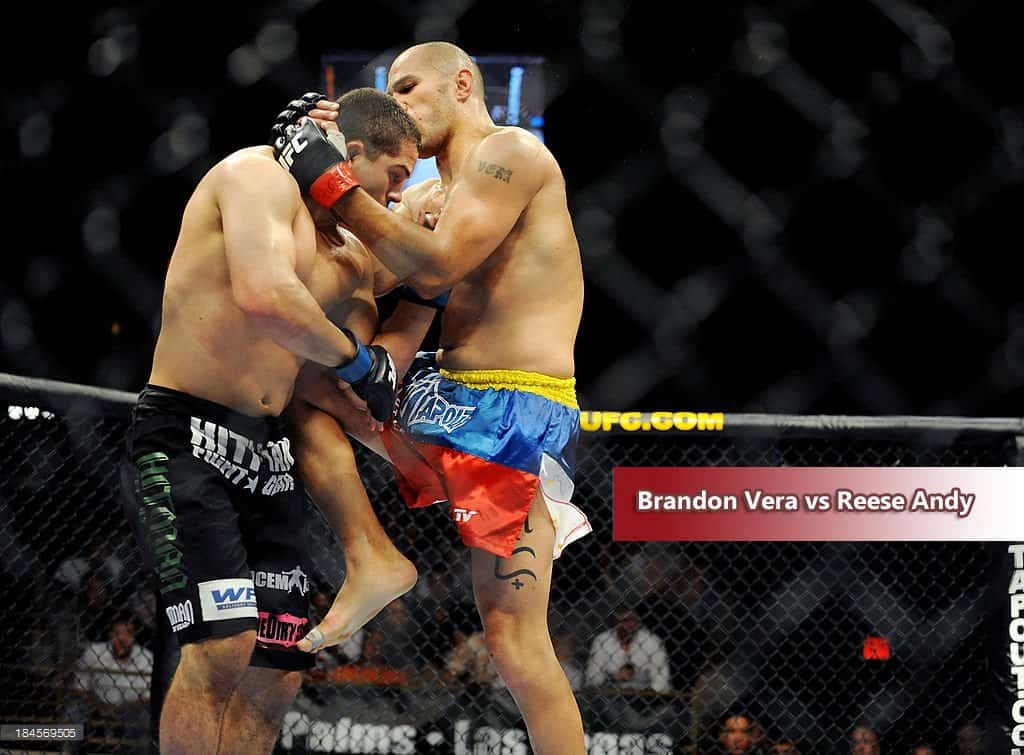 This was Reese Andy’s first UFC fight, but certainly not his first mixed martial arts battle.  Reese Andy was a IFL fighter and a 3-time Division 1 wrestler.  Brandon Vera is a UFC veteran and had every intention in schooling Reese in his intro to the UFC but is fighting for the first time at 205 pounds.

Brandon “The Truth” Vera threw two head kicks to start the fight but got taken down by Reese Andy in the first 30 seconds.  Vera countered a Reese missed leg kick which literally threw him back into the fence on his ass.  Vera let him up for another chance to strike.

Vera later orchestrated a great, hard takedown possessing side control right away.  Not much happened on the ground though as I don’t think Vera wanted to test the wrestler too much at this point.  Andy did manage to get out and back to his feet.  Round 1 came to close with Vera appearing to have a significant advantage over Reese.

Round 2 Vera had back control over Reese within the first minute.  Reese managed to turn into Vera and ultimately out and back to his feet.  The middle of round 2 was slow and tactical.  Reese’s strikes seemed weak and Vera didn’t aggressively engage.  Both wanted to counter but neither started an exchange.  The round had several periods of boos from the crowd and rightfully so as it ended with the same stare down tactics.

Reese definately felt the six plus inches of reach advantage to Vera, but did need a strong round so he came out with some quick work.  However, it ended up against the fence and the ref eventually had to break them up for excessively hugging and kissing.

There was very little action throughout the first 3 minutes of the round and not that much more in the next minute.  Vera appeared fatigued from his weight cutting and Reese just seemed overpowered by the still larger fighter.  The last minute ended as the first 3 were with little action.  Appropriately the fight ended with some kind companionship against the fence.  No need to hug after the fight, they had been doing that for 5 straight minutes already.