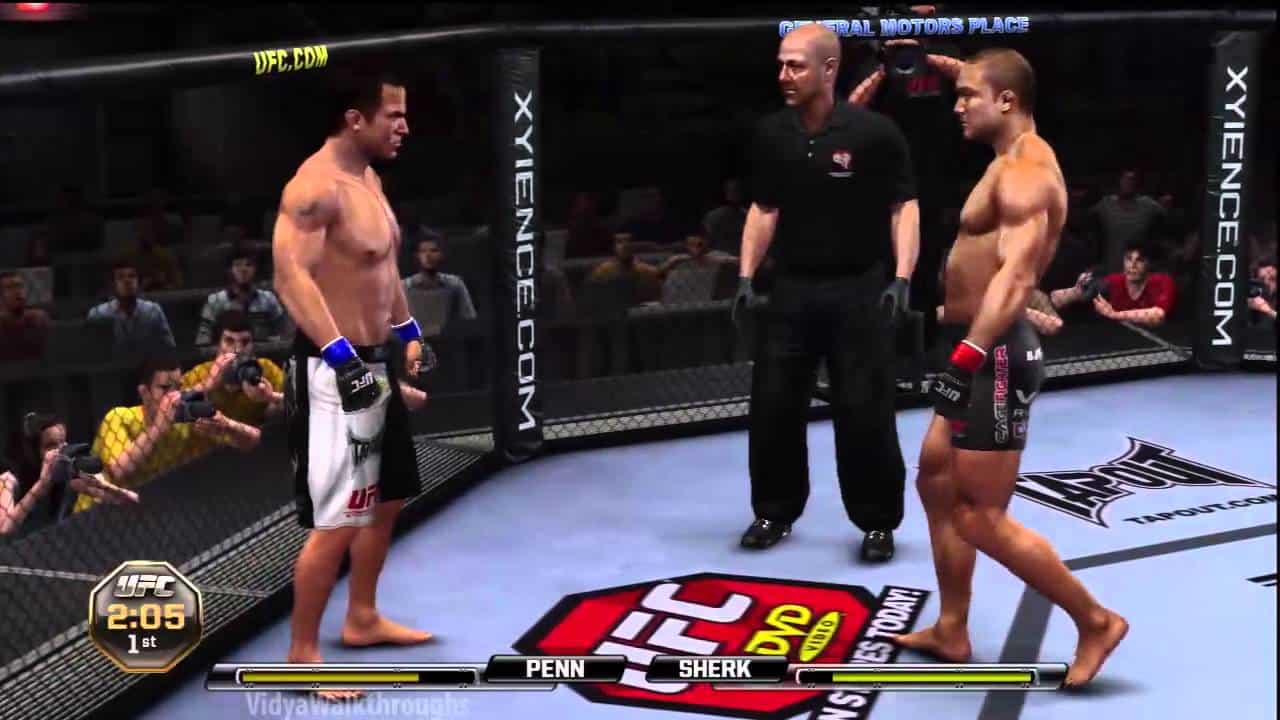 This fight is 5 rounds for the UFC Lightweight Championship Belt.  Sherk had it once before but had it taken away.  BJ Penn has the belt and intends to keep it.  The original fight took place at the end of May of this year and was being replayed on Spike TV this past Saturday.  Although knowing the outcome, it was the first opportunity to see the fight round by round, blow by blow.

Sean “The Muscle Shark” Sherk stared down “The Prodigy” BJ Penn from across the Octagon anxious to start the fight.  Sherk immediately grabs the leg of BJ but can’t get a takedown due to BJ’s wellknown takedown defense.  They exchange punches in the middle of the Octagon.  Sherk appeared to rock Penn with one of them, but BJ kept his composure.  They continue to exchange additional lefts and rights.

Penn pops Sherk to draw the first blood under Sherk’s right eye.  Sherk counters with a strong leg kick.  They continue to jab back and forth.  BJ seemed to get in the cleaner punches in the last couple of minutes of the first round as it came to a close.

Between rounds, Sherk seemed to be breathing fairly heavy from his corner stool, while BJ seemed calm as he stood in his corner.

Much of the same to open the second round as they stood and exchanged in the center of the cage.  BJ did land a solid blow to the chest of Sherk.  It was returned with a leg kick and a quick fury and fists by Sherk.  BJ tried a few knees but none really landed.  Things got mixed up a little as BJ landed an uppercut and Sherk a right hook.  However BJ continues to punish Sherk with a steady and straight left jab that kept connecting.

Sherks face started to show some damage with blood coming from both eyes.  The exchanges including jabs, kicks and left and right hands, continued to fnish the round.  The round was very active with BJ winning most of the exchanges.

Round three starts off as a repeat of the first two.  Sherk continues to throw punches as though he wants to take BJ’s head clean off while BJ lands clean punches and jabs to Sherk’s already bloody face.  Surprisingly this fight has yet to yield anyone on their back.  Somewhere in this round Sherk appears to have injured his right hand.  At the close of this round, BJ hurts Sherk with a big knee to the head and drops Sherk in the side of the Octagon.  Then with a bit of ground and pound to Sherk’s head, the end of the round came.

However, the referee had stepped in appearing as though he was going to stop the fight.  After a bit of confusion, the fight was said to be over as Sean Sherk was “unable to continue”.